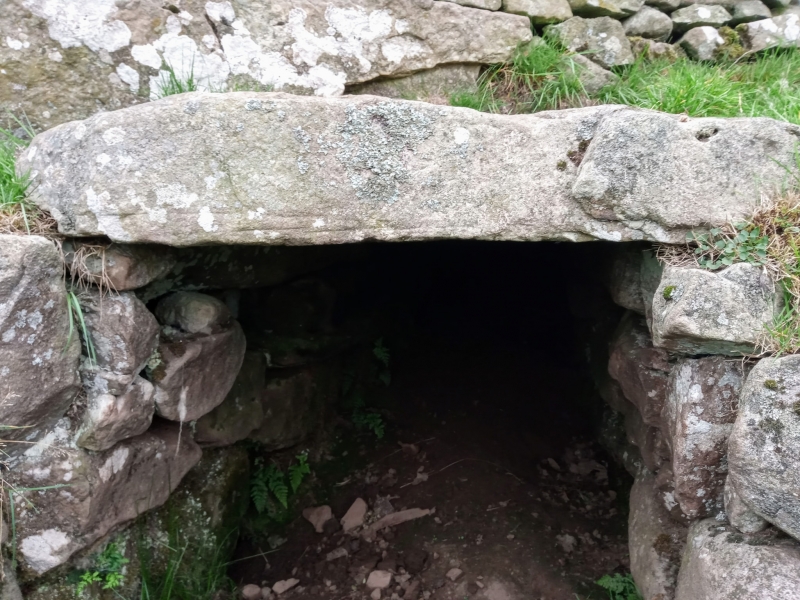 The monument comprises a souterrain of prehistoric date, visible as an upstanding monument and accessible via the original entrance on the E. The monument was first scheduled in 1967. It is being rescheduled in order to clarify the extent of the scheduled area.

The monument lies in pasture land at around 260m OD. It is built in the form of a zig-zag, measuring c12m in length. The passage runs W for 2m, then NNW for 2.7m and then W again for 7.2m. The width of the passage measures 0.9-1.7m. The walls are corbelled and measure a maximum of 1.5m in height. Only one lintel stone survives in situ. The entrance was flanked by two portal stones, with another pair at the junction of the central and innermost sections of the passage.

The main distribution of souterrains is in eastern mainland Scotland, concentrated in Angus. Wester Yardhouses is one of a few "southern souterrains" and morphologically bears more comparison with the souterrains of Aberdeenshire and the Northern Isles than those in Angus, Perth and Fife. Although several southern souterrains exhibit Roman masonry, no such material has been used at Wester Yardhouses and it is possible that it is a rather earlier example. It was cleared out in 1923; pottery, flint chips and animal bones were found. Souterrains are semi-subterranean structures generally regarded as having been used for storage in later prehistory.

The area proposed for scheduling comprises the remains described and an area around them within which related material may be expected to be found. This includes the junction of three field walls, one of which overlies the souterrain itself. The area to be scheduled is irregular and measures a maximum of 40m NNE-SSW by 40m WNW-ESE, as marked in red on the accompanying map extract.

The monument is of national importance because of its potential to contribute to an understanding of prehistoric settlement and economy. Its importance is increased by its status as one of the few souterrains to have been found south of the Forth. Although the souterrain itself was cleared out in 1923, it retains considerable potential to provide important information on associated structural remains. It is also possible that floor deposits associated with the original structure remain intact in situ.

The monument is recorded by RCAHMS as NT05SW1.