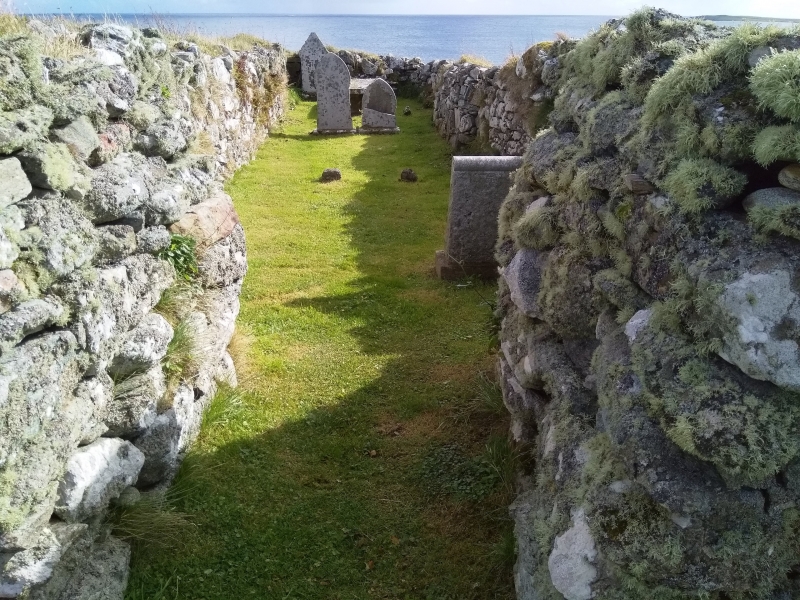 The monument comprises the remains of a chapel and several gravestones. It was scheduled in 1953, and this rescheduling extends the protected area to include associated gravestones, some of which may be of Norse date

The chapel is oblong on plan, measuring 18m E-W by 6m N-S. The walls are irregularly built and of varying thickness, standing to a maximum height of 1m; they bulge in places and have tumbled at the SW and SE corners. The only opening traceable is an entrance in the centre of the W gable. Internally there are slight indications of cross-walls at 4.7m from the E and at 3.5m from the W end. The chapel also contains, at the E end, a grave marked by a flat graveslab bearing a coat of arms and a barely legible inscription. Although this is locally identified as that of Laurence Bruce of Cultmalindie, the builder of nearby Muness Castle, the initials AB that were formerly recognizable flanking the arms suggest that it may be the grave of his son, Andrew Bruce, who inherited the castle in 1617. The chapel also contains four more recent grave stones and two rude stone grave markers in the middle. In the burial ground, near to the S side of the chapel, lie 6 roughly formed hogback tombstones, known locally as keel-stones, varying in length from 1.5m to 2.5m. One has a stone, possibly marked with a cross, standing upright at the W end.

The area now to be scheduled includes the remains of the chapel and its associated tombstones, as contained within an area measuring 24m E-W by 12m N-S, extending 2m from the N and E walls and 4m from the S and W walls, as shown in red on the accompanying map extract.