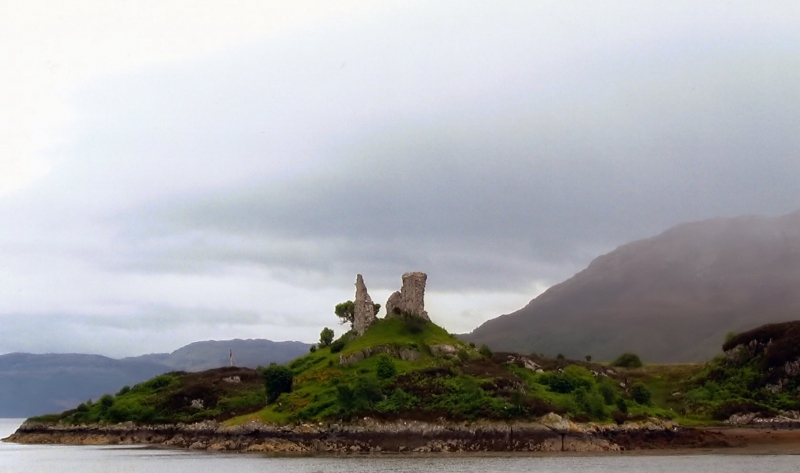 This monument consists of the remains of a medieval tower and an area around it.

The very fragmentary condition of the castle - only the N and S walls have masonry standing to any great height - makes interpretation of the building difficult. It is a simple rectangular tower which appears to have had its entrance on the first floor with access to the ground-floor cellar being from above. The tower rose to a second floor with the third floor being a garret at wall head level.

The area to be scheduled is rectangular, extending 20m out from the N and S walls of the tower and 23m out from the E and W walls, to include the tower and an area which may contain evidence relating to its construction and use. Excluded from the scheduling are the electrical fittings (but not the housings or cable runs) of the floodlights, and the bench and interpretation board to the W of the tower. The area measures approximately 60m WSW-ENE by 50m and is marked in red on the accompanying map.

This monument is of national importance as a prominent tower in a strategic position above Kyle Akin. Built by the MacKinnon family in the 15th century, it was the location of a meeting of chiefs after James V's death, where it was decided to raise Sir Donald MacDonald to the dignity of Lord of the Isles. Tradition associated the site with King Haakon of Norway and it may be that the visible remains replaced an earlier structure. The castle and the surrounding area have the potential to increase our knowledge of the use of such key sites on the Highland West Coast.