A Scheduled Monument in Nairn and Cawdor, Highland 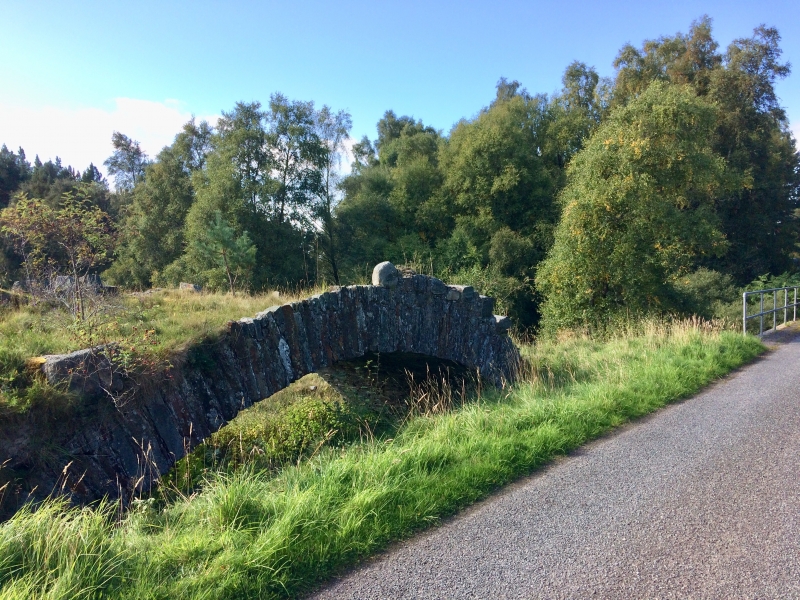 The monument is a military-road bridge, surviving as upstanding structural remains, which once spanned Tomlachlan Burn to the W of Burnside.

The bridge, a single span constructed in stone, is now disused. It is isolated in a pasture field, the river having changed its course and the modern road passing close by to the N, on a slightly modified route to the original path of Wade's road. The bridge measures 25m in length, surviving to a height of 4.6m. The voussoir and soffit of the bridge are complete, although little of the parapet and upper spandrels remain. There is evidence of alteration on the E edge of the bridge, and the revetting of the SW wall of the bridge has been merged into the modern bridge revetting.

The bridge was part of a section of the Corgarff to Fort George military road that was built following a recommendation in a memorial on the state of the Highlands presented to George I in 1724 by Lord Lovat. Following inspection of the area by Major-General George Wade later that year, Wade advocated the re-establishment of Highland companies, the construction of a number of forts, and the provision of a boat on Loch Ness. The construction of a network of roads to enable rapid troop movement was an essential concomitant of this proposal. Wade was soon afterwards appointed Commander-in-Chief of North Britain, and the first of the network of roads was being built in 1725.

By 1809 the road was showing signs of decay, and the Commissioners for Highland Roads and Bridges said it had been constructed 'without regard to the rugged nature of the country', following which there was extensive reconstruction.

The area to be scheduled is irregular in plan, to include the bridge and an area around in which evidence for its construction and use may survive, as shown in red on the accompanying map. The area is bounded on the S by a modern fence, and on the W by the current path of Tomlachlan Burn. The section of modern bridge which abuts the SW edge of the bridge, and the modern fenceline are specifically excluded from scheduling, to allow for maintenance.

Intrinsic characteristics: The main structural elements of the bridge are well preserved. The state of preservation has benefited from the diversion of the road across a modern bridge.

Contextual characteristics: The bridge provides a valuable insight into the relationship between the early 18th-century military roads and the Highland landscape through which they ran.

'pacification' of the Highlands, in response to the Jacobite threat, and the Rising of 1715 in particular, resulted in a network of fortifications and roads that are an important feature of the early modern history of what had come to be known as North Britain. Although now divorced from the road which it served, the bridge represents an important element of this network. Its direct association with General Wade adds to its interest.

The monument is of national importance as a well-preserved example of a bridge crossing dating from the earlier 18th-century 'pacification' of the Highlands.

RCAHMS record the monument as NH94SW 21. It is recorded by the Highland SMR as NH94SW0039.