A Scheduled Monument in Badenoch and Strathspey, Highland 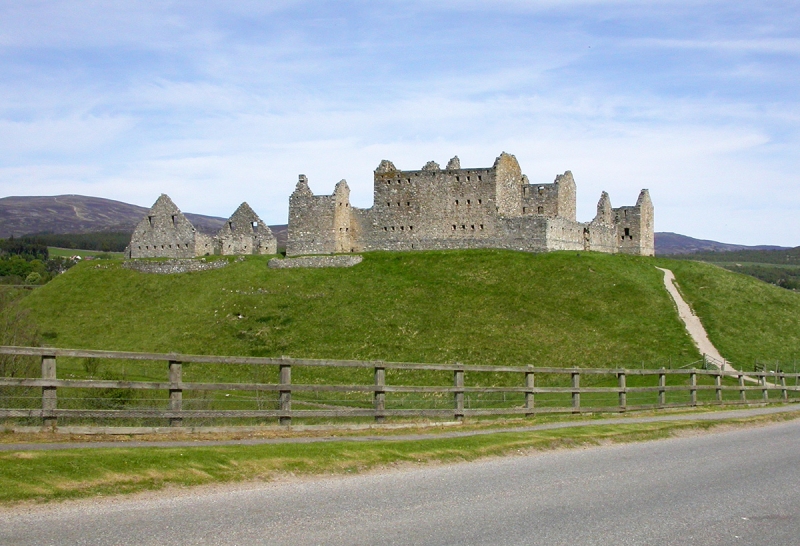 The monument consists of the ruins of a small 18th-century fort, known as Ruthven Barracks, constructed between 1719 and 1721 on the former site of a medieval castle, together with the motte on which these remains stand. The majority of the area is already scheduled, and the present scheduling merely extends the margins of the area on all sides to ensure that an adequate area is protected.

The fort comprises two opposed single-pile barrack blocks, each aligned NW-SE and containing three storeys and garret above a semi-basement. A central stairwell separates the two rooms on each floor, each measuring 5.5m x 5.2m. Loopholed enclosure walls join the outer angles of the barrack blocks, enclosing them and other structures (eg latrines) within an approximately square courtyard. The NW and SE ramparts of the enclosure are formed of a series of open-ended vaults forming gun embrasures. Above these ran wall-walks, from which access was gained to the upper storey of each of the angle-towers projecting from the E and W corners. The lower storey of the W tower contains a bread-oven and remains of a brew-house vat, and there was a basement below the ground floor of the E tower, possibly forming a cell with access from the guard-house above. The courtyard measures 28.35m NW-SE by 25.6m NE-SW externally, excluding the projecting towers. The barrack blocks were constructed with gun-loops in the rear walls, but those in the basement were soon blocked up. To the NW of the main barracks (as recommended by General Wade) a stable-block for 28 horses was built in 1734, and the remains of this survive. A postern was formed in the NW enclosure wall to allow access. Horses were used by dragoons acting as messengers on the military road network.

The barracks were built on the site, and over the remains, of an important early castle. The Comyns are said to have had a castle here when lords of Badenoch during the 13th century, and it was later owned by the Wolf of Badenoch. Ruthven and Lochindorb were the two main castles in Badenoch and Ruthven's position commanding the main route from Perth to Inverness gives it a very high strategic importance. During the 16th century the castle was rebuilt by the Earls of Huntly, but is said to have been demolished in 1689. Some remains of earlier work were excavated beneath the north-western part of the courtyard in 1983, and it is possible that some stonework around the edge of the mound may also be a survival from the castle.

The barracks were constructed for the Board of Ordnance by Sir Patrick Strachan of Glenkindie on land acquired from the Duke of Gordon at a cost of ?1,555-3s. They resisted attack by the Jacobite army on its way south in 1745, but succumbed in 1746 to the siege guns the Jacobites had by then acquired. The barracks served as a rallying-point for the Jacobites following Culloden, but were allowed to fall into ruin thereafter, as military strategy concentrated government forces in the Highlands in large forts rather than small barracks such as Ruthven. The site was re-acquired by the Duke of Gordon in 1792.

The mound on which the fort stands, although natural, appears to have been artificially scarped, and has traces of terraces. Many mottes had ditches and, although the surrounding ground is marshy, this possibility cannot be ignored. The site is also a likely point for prehistoric settlement.

The area to be scheduled is irregular in shape, measuring a maximum of 165m NW-SE by a maximum of 140m NE-SW. It extends 10m from the foot of the mound except to the SE, where it extends to the side of the road, as indicated in red on the accompanying map. It includes the barracks, the mound, and an area where a ditch may have existed.