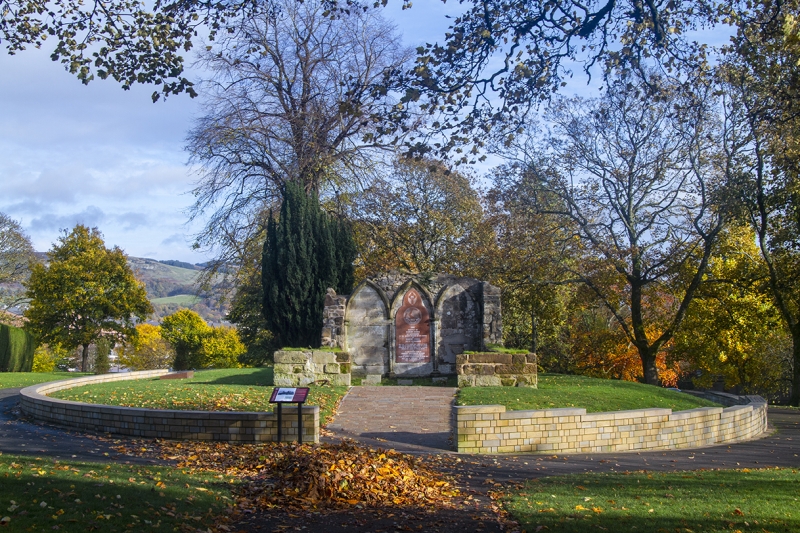 The monument consists of the remains of a medieval parish church, much altered and rebuilt in the 19th century.

The monument is now located within Levengrove Park on the S shore of the River Leven opposite Dumbarton. It is sited on a low raised mound, and is enclosed by a fence. The church comprises a rectangular structure, aligned E-W, surviving to a length of 16m, with a width of 6.10m. The nave is 11.8m long, now terminating at an arcaded dividing wall inserted in the 19th century to support memorial slabs.

The nave contains a number of 19th century burials marked by three rows of headstones. The N and S walls of the nave survive to a height of about 1m, being four courses of roughly dressed masonry. The entrance at the W end is probably part of the 19th century remodelling. The chancel end has also been much rebuilt in the 19th century as a burial aisle, and the E end wall is not visible above ground.

The earliest reference to the church of Cardross occurs in a 13th century charter whereby the Earl of Lennox granted the income to the Bishop of Glasgow (1208-33). In the early 14th century this was the parish church for Robert I's manor nearby at Cardross. The Rector of Cardross played an important part in the funeral arrangements of Robert I in 1329, and a tradition emerged as early as the 17th century that the viscera of the Robert I were buried in this church following his embalming.

The area proposed for scheduling comprises a circle of 33m in diameter, centred on the church, as marked in red on the accompanying map extract. This includes the church ruins and an area around it in which a burial ground of medieval date is likely to have existed. Any burial lairs with active rights of burial are excluded from the scheduling, as is the top 0.30m of the tarmac path that encircles the church ruins.

The monument is of national importance because of the potential of the upstanding structure to contribute to our understanding of medieval ecclesiastical architecture. Its below-ground remains have the potential through excavation to add significantly to our knowledge of the historical evolution of church building on the site, as well as contributing to our knowledge of medieval life through the skeletal remains likely to be buried here. Moreover, the site has the potential to feature in the national consciousness due to its historical function during the life and death of Robert I.

Irving, J. (1879) The book of Dumbartonshire [sic]: a history of the county, burghs, parishes, and lands, memoirs of families, and notices of industries carried on in the Lennox district, 3v, Edinburgh, 2, 306, 360.

OPS (1851) Origines Parochiales Scotiae: the antiquities ecclesiastical and territorial of the parishes of Scotland, 1, Edinburgh, 26, appx. 502.

OSA (1791-9) The statistical account of Scotland, drawn up from the communications of the ministers of the different parishes, Sir John Sinclair (ed.), Edinburgh, Vol. XVIII (1796), 218.