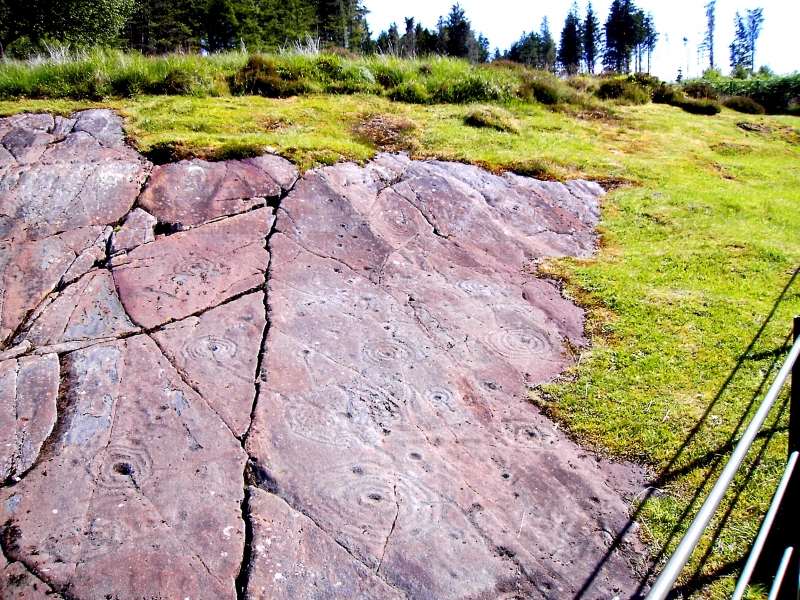 The monument comprises two groups of prehistoric rock carvings which are situated on rising ground to the N of Achnabreck farmhouse.

The major carvings are situated in an enclosure at the edge of a forestry plantation and fall into three groups. The lower group includes multiple-ringed (up to 7 rings) and guttered-ringed cups accompanied by an extensive network of grooves and 4 exceptionally large plain cupmarks. The middle group includes one of the largest cup and ring markings in Scotland, measuring almost 1m in diameter. The upper group includes a range of designs, but of special interest are two double spirals, one triple spiral and several multiple rings.

The other carvings are situated in a forestry plantation 150m E of the major group. The decoration includes at least 15 multi-ringed cupmarks, some of which have gutters.

There are two areas to be scheduled: the W area is polygonal on plan and measures 90m from NE to SW by up to 30m; the E area is rectangular on plan and measures 20m from E to W by 10m, to include the visible rock carvings and an area around in which associated remains may survive, as marked in red on the attached map extract.

The monument is of national importance because it forms perhaps the most extensive and impressive single group of prehistoric rock carvings in Scotland. Furthermore it is part of the densest and most elaborate concentration of later Neolithic and Bronze Age carvings in Scotland. The importance of the rock art of Mid Argyll has been recognised since the nineteenth century and has been the subject of several major studies. The rock carvings are part of a group of broadly contemporary ritual and funerary monuments in Kilmartin Valley, a 'ritual landscape' which has the potential to provide information about later Neolithic and Bronze Age ritual practices and, by inference, society.