A Scheduled Monument in Dalkeith, Midlothian 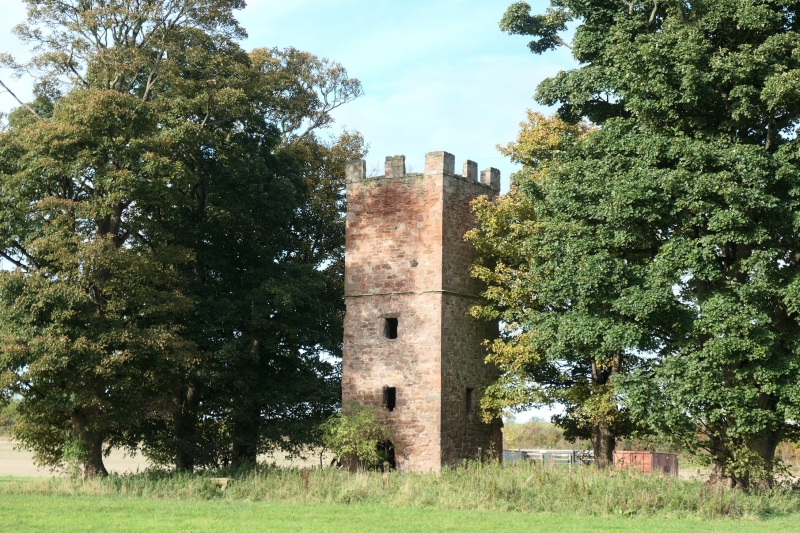 The monument consists of the remains of the 17th century tower of Old Newton Kirk also called St Mary's, its surrounding graveyard which is situated within a group of three contiguous sub rectangular

enclosures of medieval date, and an adjacent rig and furrow field system. The enclosures and field system are only visible in aerial photographs.

rubble with ashlar dressings. It has had five storeys with a

crenellated parapet. The upper storeys above the horizontal string course set at third floor level appear to have been rebuilt shortly after 1915. The tower is oblong on plan, measuring 5.1m N-S by 4.8m

E-W. The rest of the gabled church is no longer extant. It appears to have been constructed at a subsequent date to the tower and would

have been built against its N wall. The entrance from the N wall of

the tower to the body of the church has been blocked up, other

blocked entrances are in the N and W walls on the first floor. In the

window in the E wall. The wooded burial ground has been fenced off.

The rectangular area measures 28m NW by 18.5m NE. In it are three eighteenth century table tombs. The church and burial ground occupy

with two smaller enclosures of similar shape. In the NE enclosure

least one rectangular building. The area of these enclosures which appear as crop marks is 140m NW by 80m NE. To the NW of the

enclosures is an area of rig and furrow which is probably of contemporary date. This feature has been truncated by the Edinburgh

The area to be scheduled is an irregular pentagon, it includes the church tower, surrounding enclosures and a sample of the associated field system. The N boundary is defined by the line of the overhead electricity cable on the S side of the Edinburgh City bypass, the S boundary is defined by the wall of Dalkeith Park. The area measures a maximum of 280m E-W by 160m N-S, as marked in red on the accompanying map.