A Scheduled Monument in Ellon and District, Aberdeenshire 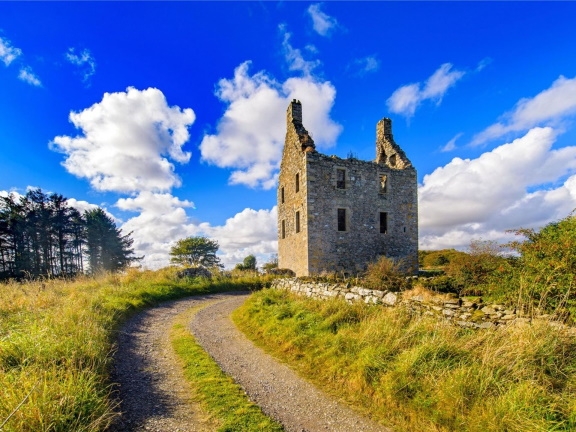 The monument consists of the remains of Knockall Castle, a sixteenth- century towerhouse with late seventeenth-century additions. It was possessed by the Udny family but was temporarily captured by Earl Marischal, a covenanter, in 1639. Knockhall fell into ruin after it was accidentally burnt in 1734.

The towerhouse is situated 150m ESE of Mains of Knockhall. The building is L-shaped, the long elevations lying N and E, with a square stair-tower projecting 3.45m from the N wall. Knockhall has had a vaulted ground floor (the vault over the kitchen has collapsed), two upper storeys and a garret. The rubble-built walls stand to roof height and measure 14.05m E-W by 14.05m N-S overall, with walls about 1.2m thick. The basic fabric dates from the sixteenth century, later modifications being confined to windows, internal details and probably the N stair-tower.

The entrance, with a lintel dated 1565, is in the re-entrant angle of the W wing. Above the entrance are two empty moulded panels. This entrance is connected by a passage directly to the stair tower. Entering off the passage on the W is the kitchen, with its fireplace, sink and drain. The E portion, originally one apartment, also has a sink and drain. The upper floors have gone and the stairs are demolished. Most of the rooms are provided with garderobes. Security features include oval gun-loops, small windows and a door with a hole for a sliding bar.

The castle was also provided with an enclosed courtyard to the S, in the SE angle of the enclosure are the foundations of a fortified round tower, 4m in external diameter. This feature was latterly converted into a dovecot. The area to be scheduled is rectangular, to include the castle and associated courtyard, and measures a maximum of 25m NE-SW by 30m NW-SE, as shown in red on the accompanying map.

The castle is of national importance as it is a well preserved example of a fortified tower-house built in the sixteenth and renovated in the seventeenth century, which retains part of its enclosing barmkin and a separate defensive round tower. Individually and as part of the body of surviving Medieval domestic residences it provides architectural, cultural and scientific evidence retrievable through excavation and analysis which has the potential to increase our knowledge of late Medieval/early modern Scotland.

RCAHMS records the monument as NJ92NE 2.