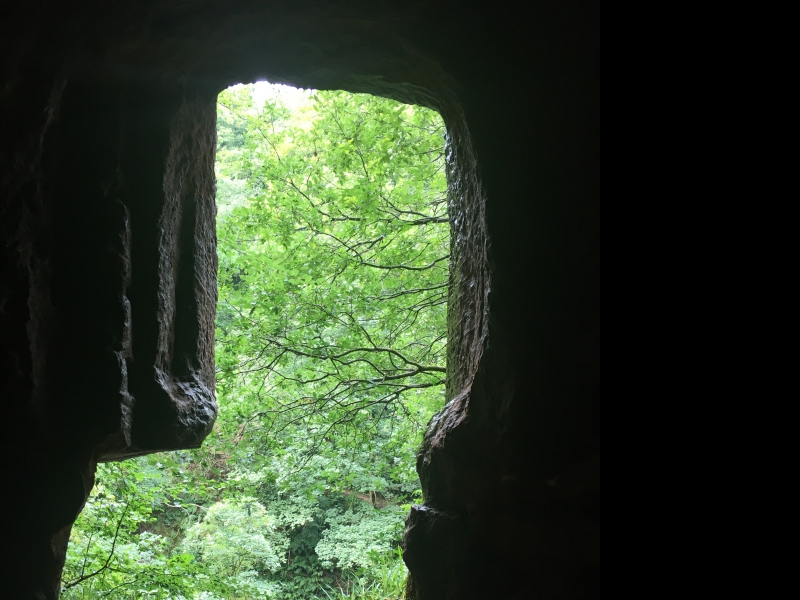 The monument comprises an artificial cave of unknown date, popularly known as 'Wallace's Cave', and a series of rock carvings of prehistoric date in a nearby recess or shelter.

The cave and the carvings are sited about 50m apart, in a precipitous cliff face in Roslin Glen. This cliff face of sedimentary rock, at this point up to 30m high, forms the eastern side of the gorge cut by the River North Esk. The carvings are located in a shallow recess in the cliff, some 10m above the river. The cave lies S of and roughly 8m higher up the cliff face than the carvings.

The small rectangular entrance to Wallace's Cave is situated on a rock ledge about 18m above the River Esk. The cave extends up to 12m into the cliff and contains two recesses. The cave is traditionally thought to have been a hiding place of Sir William Wallace (hence its popular name); it is estimated that it could have held up to 70 men. The actual date and function of the cave are unknown and no finds have been recorded. Given the presence of the prehistoric rock carvings nearby, it is possible that the cave was first used in prehistoric times and then re-used, and possibly extended, in historic times.

The recess with the carvings occupies a shelf in the cliff and is roughly triangular in shape, some 3m wide at the mouth and about 2.5m deep. The recess is partly overhung by the cliff especially along the left-hand wall. The floor is uneven, sloping and earth-covered. On the left (N) wall of the recess the carvings are arranged serially along a bed in the sedimentary rock c.1.5m above the floor. After an angle in the rock the carvings continue on and below the right-hand wall, where the rock slopes obliquely towards the front of the shelter.

The rock carvings are highly unusual and well-preserved. On the left-hand wall is a rich array of barred circles, triangles, spirals, a scutiform design and other shapes, including some signs resembling the alphabet letters 'I H O', all executed by pecking. The carvings on and below the right-hand wall include a complex double-spiral, an S-spiral, concentric circles and numerous other circles. Other carvings are likely to be concealed beneath soil accumulated at the base of the rock.

The carvings are likely to be Bronze Age in date; they share affinities with some Irish Bronze Age rock art.

The cave is of national importance because of its potential historic associations with William Wallace and because it has the potential to provide archaeological evidence for its formation, development and function(s) in antiquity.

The rock carvings are of national importance as a well-preserved and rare occurrence of prehistoric rock art in eastern and lowland Scotland, still in their original setting. The rock shelter and carvings have the potential to produce important information about the techniques, style and symbolism of prehistoric rock art and any ritual or associated activities, as well as about artistic and other contacts across the Irish Sea during prehistory.