A Scheduled Monument in Abbey Hulton and Townsend, Stoke-on-Trent 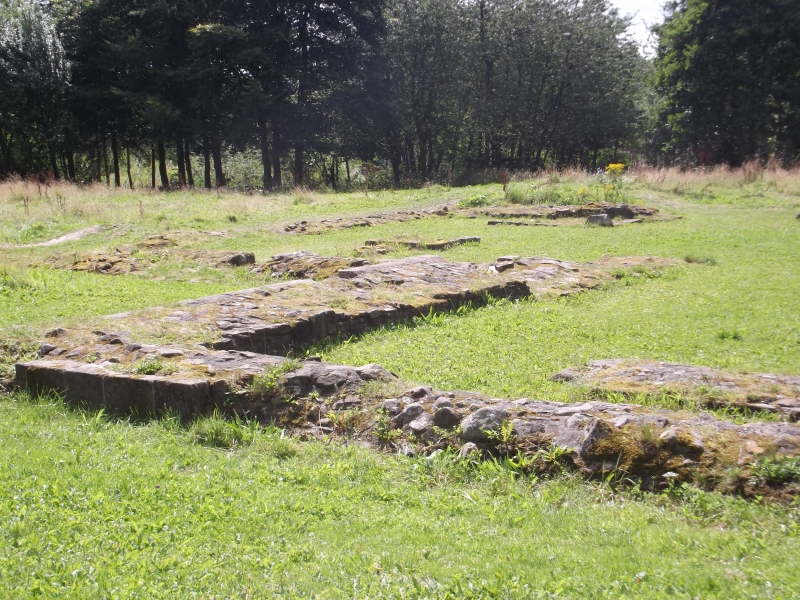 The monument includes the standing structural and buried remains of a
Cistercian monastery, known as Hulton Abbey, and associated earthwork and
buried remains of water management features. The abbey occupies a slightly
elevated position on the eastern side of the upper Trent valley at Abbey
Hulton, a suburb of Stoke on Trent. The abbey was founded by Henry de Audley,
a local nobleman, and like all Cistercian monasteries, was dedicated to St Mary.
The first brethren were professed in 1219 and the foundation charter issued in 1223.
Its foundation was overseen by an established abbey,
or mother house, at Combermere in Cheshire. Hulton Abbey was the last of
three Cistercian monasteries to be founded in north Staffordshire. The other
two monasteries, at Croxden and Dieulacres, are the subjects of separate
schedulings.

Documentary sources indicate that the abbey at Hulton was never very
wealthy, despite having acquired substantial estates in the vicinity during
the 13th century. At this time much of the abbey's income was derived from
sheep farming, but with a tannery and fulling mill at Hulton providing
additional funds. By the 16th century the abbey owned coal mines at Hulton and
Hanley, and a smithy at Horton. Documentary sources also indicate that the
ecclesiastical community at Hulton Abbey was not large. In 1377 and 1381 it
numbered only five (including the abbot) and in 1538, when the abbey was
dissolved, there were eight monks and an abbot.

After the Dissolution, the church bells were taken down and sold, and the
lead removed and melted down. The abbey quickly fell into ruins and was used
by local people as a convenient source of building stone. The site of the abbe
was entirely incorporated into agricultural land by the early 19th century and
around 1880 was occupied by Carmountside Farm. In the 1930s Carmountside
Secondary School was constructed on the abbey site. The majority of the school
buildings were demolished in the late 20th century and the area is now a
public open space.

The abbey was rediscovered in 1884 when drainage works at Carmountside Farm
uncovered the remains of ruined buildings. This discovery prompted more
extensive excavations, which revealed the ground plan of the principal
structures. These buildings included the church, the chapter house (used for
the regulation of religous duties and business), dormitories, a kitchen and a
refectory. They were laid out around a square cloister, with the church on the
northern side, and are collectively known as claustral buildings. During this
investigation decorated coffin lids were found, together with numerous
fragments of medieval floor tile and pottery. Human burials were also
discovered in the church. Periodic small-scale archaeological excavations
undertaken between 1930 and 1983 examined parts of the church and the
associated claustral buildings.

A further programme of archaeological work was undertaken between 1987 and
1994, which involved the excavation of the church and the adjacent chapter
house. The structural fabric of these buildings was examined in detail, and
burials within the church were also analaysed. In the area surrounding the
claustral buildings limited excavation also revealed the monk's graveyard to
the north east of the church, and other contemporary buried remains and
structural features to the south. Both of these areas are included in the
scheduling.

Archaeological excavations indicate that the church is of basic cruciform
design. It is about 41.5m long and 32m wide across the transepts and has a
relatively short nave. The most recent archaeological work has demonstrated
that the chancel and the south transept were built first, with the remainder
of the church constructed later in the 13th century. The rectangular chapter
house to the south of the church was built about 1270.

The eastern part of the church remains visible, with bases of walls standing
up to 0.8m high. All the walls are constructed of red sandstone and some
retain their ashlar facings. Column bases at the eastern end of the nave and
the altar plinths in the chancel and transepts are also visible. All other
parts of the church and the other claustral buildings survive as buried
features.

About 150m south east of the church are the remains of a large dam,
approximately 80m long, constructed of earth and stone. Its outer face stands
to a maximum height of 3.2m, and has a stepped profile at its north western
and south eastern ends. The dam retained a sizeable pond, which was used as
the source of power for the abbey mill. The pond was drained and the area
infilled in modern times. The dam is included in the scheduling, although the
site of the pond is not included. Water from the pond flowed westwards into
the River Trent. This area, to the south of the claustral buildings, would
have served as the focus of industrial activity, which is known from
documentary sources to have contributed to the economic basis of the
monastery. Limited archaeological excavation here has shown that water
channels of medieval date survive well as buried features. This area is also
included in the scheduling.

To the west of the claustral buildings, in the valley bottom close to the
River Trent, fishponds belonging to the abbey were constructed. This area was
developed for housing in modern times and is not included in the scheduling.

A number of features are excluded in the scheduling. These are: all paths,
paved and tarmacadam surfaces, fences, all posts and the brick-built gate
piers, the utility poles, the modern free-standing brick-built walls, the
concrete bridge over the stream, the education centre and the boxing club, and
the associated outbuildings; however, the ground beneath all these features is
included.

Hulton Abbey is a good example of a small Cistercian monastery. The
archaeological excavations undertaken here have revealed the layout of the
claustral buildings and have demonstrated that the majority of these
structures survive well as buried features, despite the damage caused during
the use of the site as a farm and as a school. It is clear from these
investigations that contemporary deposits, including floors and external
surfaces, are also well-preserved. The artefacts and organic remains contained
within these deposits will provide valuable insights into the daily lives of
the brethren. Limited archaeological work to the north east of the church
indicates that the monk's cemetery survives well. The skeletal remains that
are preserved will provide significant information about the living
conditions, diet, health and funerary practices of a discrete medieval
community. The evidence existing here can be compared with the burials of the
senior clergy and members of the patron's family who were interred within the
church. The area south of the claustral buildings will provide evidence about
the organisation and development of the various industries located here.
Associated waterlogged deposits containing a variety of organic remains will
also provide evidence about the contemporary environment, including land use
in the surrounding area. The mill pond dam survives well and retains evidence
relating to its construction and subsequent modification. The importance of
the monument is further enhanced by documentary sources, which provide
additional information about life in the abbey, the associated activities of
the brethren, and about the benefactors. The monument is in local authority
ownership and has considerable educational potential.