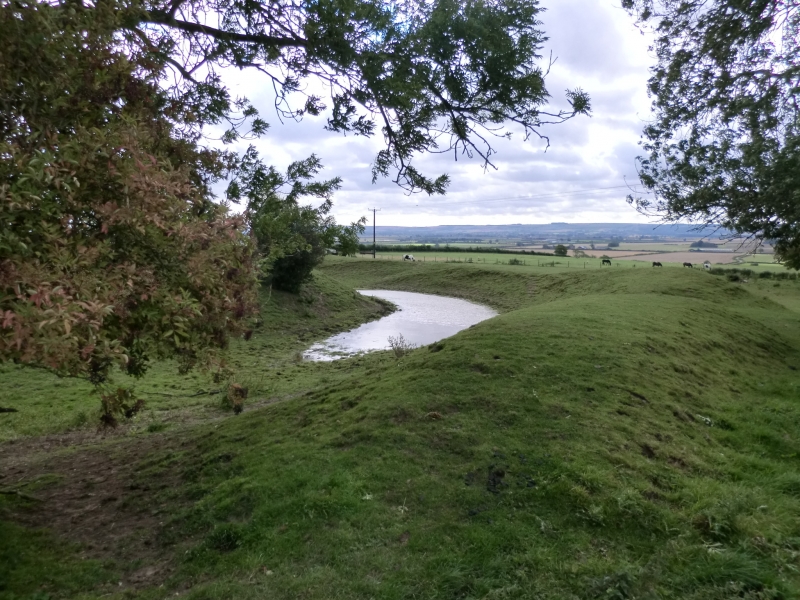 The monument includes a substantial moated site, together with traces of
an outer enclosure and later ridge and furrow. This is one of a number of
defended manor houses along the northern edge of the Vale of Pickering.
Unusually, the defences at Wilton Hall are very substantial, making this
the best preserved moated site in the area. A licence to crenellate was
granted to John de Heslerton in 1335.

The moat itself is roughly circular, averaging 9m across and 2.4m deep,
with an outer bank surviving up to 2m high and 6m wide. The moat survives
well on three sides, but on the north side the moat is overbuilt by the
modern road. Within the moat stands a level platform with a
sub-rectangular shape, measuring roughly 65m by 80m. Traces of masonry
protrude from the ground, including some chamfered ashlar. The inner banks
of the moat also show traces of buried stone revetments.

An excavation in 1975, at the north east corner, revealed evidence of
occupation from the 12th century or earlier. The ditch on the north side
of the site is of 13th century date and smaller than the ditch on the
other three sides, possibly because the village was on this side. The
northern defence line appeared to consist of a substantial mortared wall,
which was part of a building and gatehouse complex. The inner bank
appeared to be of one period, while the outer bank showed two phases. The
northern ditch was open until at least the 14th century, and was later
filled by the levelling of the second phase of the rampart.

Aerial photographs reveal that the moated site was enclosed on at least
three sides by a larger, rectangular enclosure, with a ditch running
roughly 40m beyond the moated site on its west, south and east sides, with
ridge and furrow of `reversed S' type running up to this from the south.
Within the modern field containing the moat, the ridge and furrow
terminated at the outer enclosure ditch, but both of these have now been
flattened by modern ploughing. However, in the next field to the west, the
ridge and furrow continues across the partially-visible ditch and the
interior of the enclosure, and both survive as earthworks. This ridge and
furrow is straighter and more tightly spaced than that further east,
suggesting that this is post-medieval in date.

The churchyard wall, hedges and field gates are excluded from the
scheduling, although the ground beneath them is included. In the centre of
the roadside section of the moated area is a short length of walling,
showing a piece of medieval dressed masonry sandwiched between two lesser
pieces of masonry. All of this masonry is included in the scheduling.

Wilton Hall is one of a series of castles and defended manor houses along
the northern edge of the Vale of Pickering. It is unusual in displaying
earthworks in a good state of preservation, with the moat and bank
surviving on three sides. Protruding masonry and documentary sources
suggest that substantial masonry structures once stood on the inner
platform, and that a gatehouse complex provided access from the north
side, where the settlement stood. Environmental evidence is likely to
survive well in the ditch deposits.

Aerial photographs indicate that the moated site stood within a large
rectangular enclosure, providing a ditched outer bailey, clearly respected
by the ridge and furrow to the south. Further ridge and furrow, probably
of later date, survives to the west and overlying the outer eclosure.