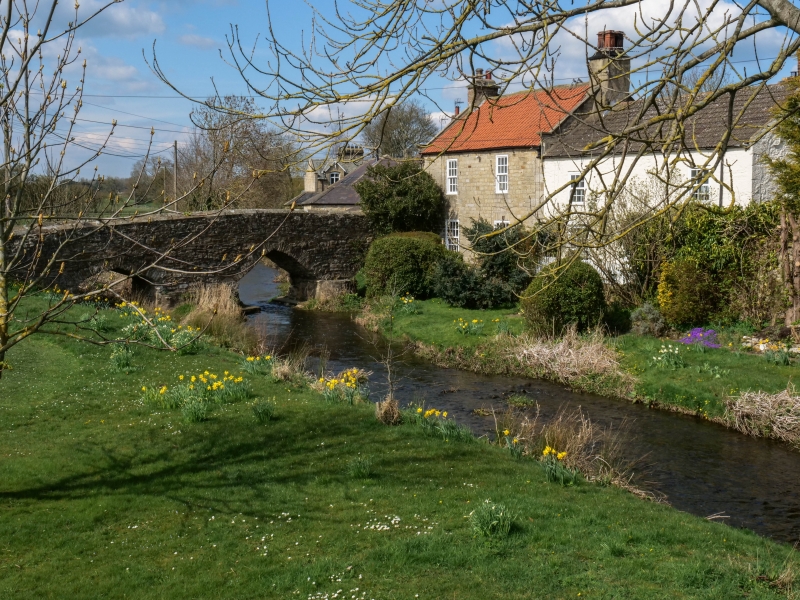 The monument includes a narrow bridge of three arches within the village
of Aldbrough St John. Originally built for packhorses, but now carrying a
footpath between High Green and a smaller green to the south, it crosses
Aldbourgh Beck approximately 40m upstream from the more recent road
bridge. It is known to the County Council as Bridge number 273.1. The
bridge is listed Grade II.

Aldbourgh St John lies 1km west of Dere Street, the north-south Roman road
which is still in use as the B6275 and, further to the south, as the A1.
The village and its packhorse bridge lie on a route that diverges from
Dere Street south westwards towards Richmond. It is thought to have formed
part of a major medieval packhorse route linking Tyneside with Lancaster
crossing the Tees at Piercebridge and then after Aldborough continuing via
Marske, Hawes and Ingleton.

The packhorse bridge is of rubble stone construction and very irregular in
design. Including abutments it is approximately 25m long with a total span
across the beck of nearly 15m. The bridge's two piers are of different
widths, the southern being twice as wide as the northern pier, but they
are of similar design. Both have crude cutwaters which are triangular
upstream and domed downstream. With the abutments, these support three
irregular pointed arches. The southernmost arch is the smallest. This is
fairly flat and has a double arch ring of rubble stone. The other two
arches are both higher and wider but only have single arch rings. There is
some evidence that this pair of arches are later than the piers, as there
is a slight change in build. They also spring from lines of corbel stones
that extend out from the piers and the northern abutment. Elsewhere,
similar corbel stones have been identified as being for timber supports
for a wooden deck. However they may also have been to support temporary
timber work used during the construction of the stone arches. The current
deck of the packhorse bridge is covered in modern concrete. The parapets
are just over 1m high, topped with ashlar coping stones of triangular
cross section and are 1.4m apart, sweeping outwards at either end. There
is some evidence that these parapets are a later addition to the bridge,
rising from an original 0.15m high curbing. Another more recent addition
to the bridge are concrete aprons that extend around the piers in the
river bed. These are designed to protect the piers from being undermined
by scouring.

In common with many packhorse bridges, the dating of the various parts of
the bridge is uncertain. It does lie on a known medieval packhorse route
and thus is believed to be early in origin. A common medieval bridge
design, first introduced by the Romans, used stone piers and abutments to
support a timber deck. The corbelling on the bridge's piers could be
evidence of the use of this design. Pointed stone arches are used in
bridges from the 14th century, but Aldborough's could date as late as the
17th century. However the bridge is thought to pre-date the cottage that
is built on the eastern side of the northern abutment. This cottage and
its garden wall, which butts up against the bridge, lie immediately
outside the monument. Similarly on the south bank the upstream, western,
parapet butts up to a stone field wall that also lies immediately outside
of the monument. Excepting these two parts, the monument includes an area
extending 2m beyond the standing structure of the bridge, as well as the
area beneath the arches.

The packhorse bridge across Aldbrough Beck, immediately south west of High
Green is a good example of a minor bridge. It retains a wide range of
construction features and evidence of alterations that add to its interest
and importance. The bridge has not been strengthened in modern times and
is thus expected to retain original deposits in the interior of the
bridge's structure.