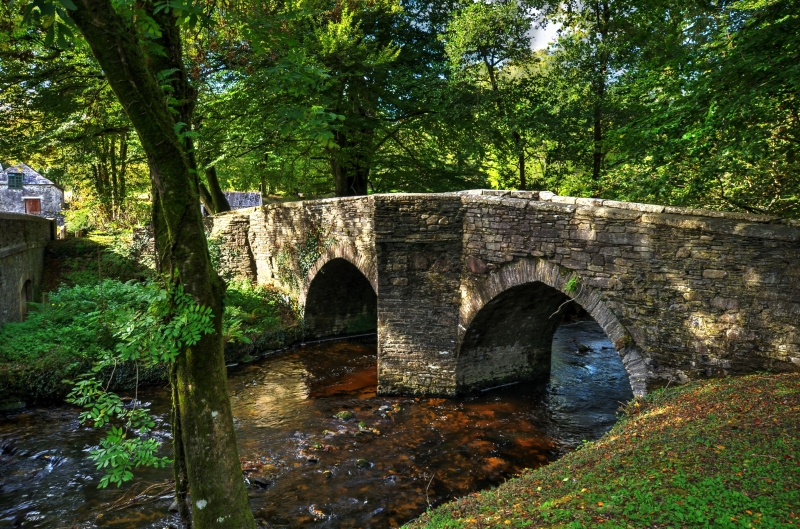 The monument includes a later medieval bridge known as Treverbyn Bridge,
crossing the River Fowey 2.1km east of St Neot in south east Cornwall. The
greater part of its build is of early 15th century date but the western
part of the bridge incorporates substantial remains from an earlier phase.
Treverbyn Bridge is a Listed Building Grade II*.
Treverbyn Bridge spans the river east-west by three arches at a relatively
wide point in its otherwise narrow steep-sided valley south of Bodmin
Moor. Beneath the bridge, the river flows in two unequal channels. The
main, eastern, channel is spanned by two broad slightly pointed arches,
each about 4.25m across, separated by a pier about 2.5m wide with pointed
cutwaters. This pier marks the highest point of the bridge's carriageway,
its cutwater faces continued into the parapet as triangular refuges
alongside the road. A slate string course marks the parapet base on the
cutwaters' outer faces. The central arch ring is flush with the sides of
the bridge above; the eastern is slightly recessed, more so and
assymetrically on the upstream side where a second arch ring carries the
parapet. This recessing and the second upstream arch-ring result from an
18th century widening of the bridge approach. The eastern abutment
projects slightly from the riverbank, with widely splayed sides rising to
the level from which the arch-ring springs. The masonry facing these
eastern two arches, pier and the eastern abutment is mostly of local
slatestone rubble, with only a very sparse scatter of granite blocks.
By contrast, the bridge's western arch over the smaller river channel is
much narrower; about 3m across, capped by flat granite slabs resting on
small rubble supports built out at each side. Beneath these slabs, a
deeply recessed arch-ring under the upstream, northern, side is considered
a later strengthening addition. The 18th century widening of the bridge
approaches is reflected by a granite slab carrying the parapet out across
the angle between the downstream face of the arch and the face of the
bridge's western abutment. The pier separating this arch from the eastern
two is about 3.5m wide upstream, 4.5m wide downstream, with dissimilar
pointed cutwaters to each side: the upstream cutwater occupies the full
pier width, but the downstream one only fronts the western 2m of the pier.
Neither cutwater on this pier carries up into refuges in the parapet,
their upper ends truncated by uneven and roughly-faced rubble surfaces
sloping steeply outwards from the top of the parapet. The western abutment
is faced by a flat wall along the riverside, splayed back along the
riverbank on the south side of the bridge but rising on the north to the
height of the parapet base and projecting incongruously beyond the bridge
face as a wall stub. The fabric of the bridge's western abutment, arch and
pier combines slatestone rubble with frequent granite blocks and rounded
slabs. Dressed granite slabs also face the apex of the pier's upstream
cutwater, whose base is founded on three courses of large dressed granite
slabs. The bridge's carriageway narrows from 3.65m wide at its parapets'
eastern end to 2.6m wide alongside the refuges above the eastern pier.
From there it barely widens until it crosses the western arch where the
18th century widening allows the south parapet to curve out above the
western abutment. The parapets are generally 0.5m to 0.7m high and about
0.3m wide; that on the north is 25.3m long while the southern is 28m long.
They are mostly of local slatestone, again with a higher granite content
over the western pier, arch and abutment where the parapet is partly
rebuilt but will have reused the dismantled rubble of its predecessor.
The parapets are capped by iron-cramped granite coping slabs displaying a
diversity of lengths and forms, with most dressed to a shallow chamfer
along each upper edge.
Set upright in the carriageway against the southern parapet's western
curve are four slabs: the three smallest lack obvious evidence for former
use but the largest slab, 1.02m by 0.56m and cracked in two, has a 0.04m
diameter hole near its centre from which two worn grooves extend about
0.12m across one surface.
Although on a minor road in the modern highway network, Treverbyn Bridge
is situated on the medieval main route linking the important market towns
of Liskeard and Bodmin. The route had been bridged over the River Fowey
prior to the 15th century but this early Treverbyn Bridge was described as
`threatening total ruin' in 1412-1413 when the Bishop of Exeter granted an
Indulgence for its repair, providing a pardon of 40 days penance for their
sins to all who contributed to the bridge's repair: a frequent method of
gaining funding for bridge repairs at that period. The works resulting
from that Indulgence are identified as the two broader eastern arches and
pier, their form and construction typical of surviving early 15th century
bridges elsewhere in south west England, while the markedly different
form, construction and fabric of the western arch, pier and abutment
denote their origin as a remnant of the earlier bridge. The slight
carriageway widening evident at both ends of the bridge is attributable to
a reported 18th century episode of bridge-widening here. The road carried
by Treverbyn Bridge lost its importance in the early 19th century when it
was replaced by a new, more direct, turnpike road 2.5km to the south,
passing through the Glynn Valley, the A38 trunk road in the modern
network. By the early 20th century, the bridge was again in poor repair
and unsuited for the growing quantity and size of traffic even on such
minor roads. Consequently in 1929 it was replaced by a new bridge, beyond
this scheduling, which crosses the river about 10m downstream, leaving the
medieval bridge used only by pedestrian and light traffic.
The modern sign, its granite plinth and all barbed-wire fencing are
excluded from the scheduling, although the ground beneath these features
is included.

Treverbyn Bridge survives very well, retaining its medieval structure
substantially intact with only limited post-medieval modification. The
date for most of its structure is well-documented by the extant early 15th
century Indulgence from which it was funded, but the bridge is also highly
unusual in retaining substantial remains of the earlier bridge structure
to which that Indulgence refers, demonstrating developing methods of
bridge construction and architectural style during the later medieval
period. The presence of Treverbyn Bridge on what is now a minor road, and
largely by-passed by a modern bridge, illustrates the historical
importance of this route and the evolution of the highway network since
the medieval period.