A Scheduled Monument in Selworthy, Somerset 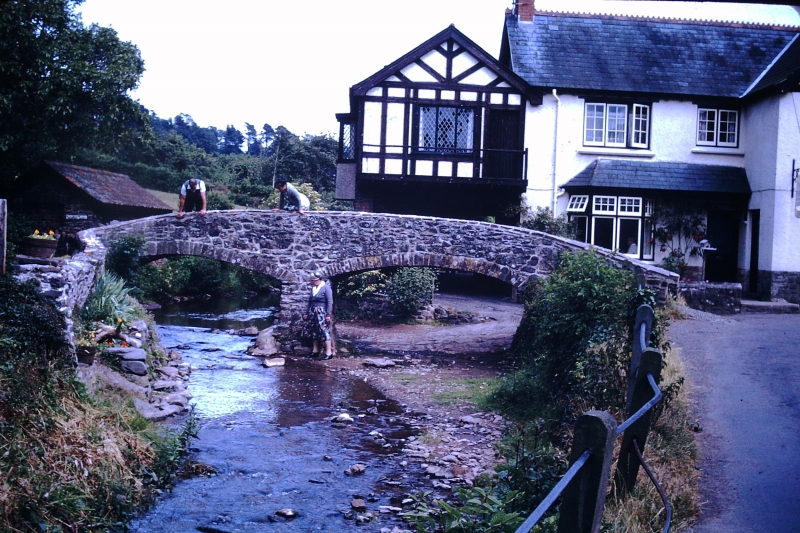 The monument includes a medieval packhorse bridge which crosses the Aller
Brook between Higher Allerford and Cross Lane Farm. The bridge, which is known
as Allerford packhorse bridge, is constructed in red sandstone random-rubble
with two arches separated by a central pillar which has an angled cutwater on
the eastern, upstream side. The arches are segmental in shape with
random-rubble voussoirs and those on the western, downstream side have a
slightly flattened shape. The bridge pathway is of cobbled stone with an
average width of 1.3m between coped parapet walls which are 0.5m high and 0.3m
wide. The parapet walls on the north side of the bridge splay outwards and
extend for a further 1.9m on the west side. A deep ford is located adjacent to
the east side of the packhorse bridge.
The bridge is Listed Grade II*.
All fencing and fence posts are excluded from the scheduling, although the
ground beneath these features is included.

Allerford packhorse bridge, immediately north of Cross Lane Farm survives
well with no major modern refurbishment and is a good example of its class of
monument, which has remained continually in use. The packhorse bridge is well
known and provides an important focal point in a village which is very popular
with tourists.