A Scheduled Monument in Egton with Newland, Cumbria 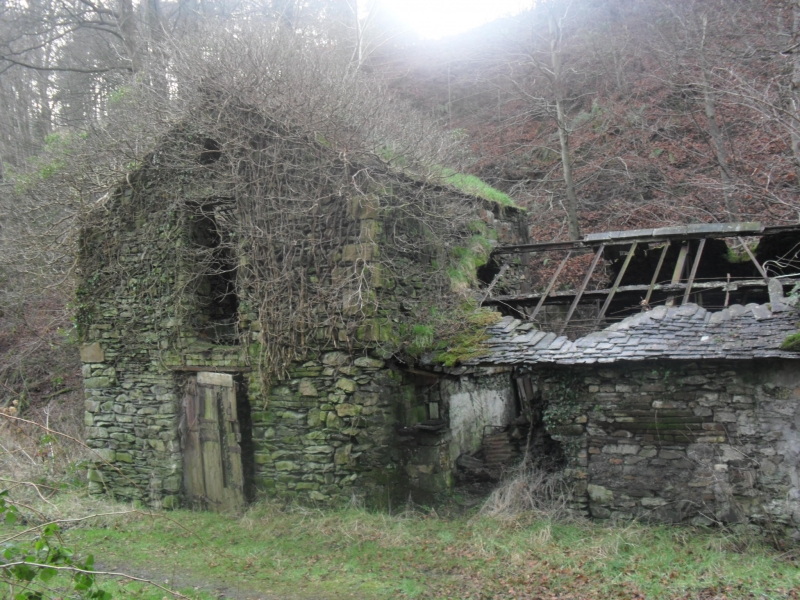 The monument includes the upstanding and buried remains of Newland blast
furnace, blacking mill, associated buildings and water management systems.
It is located on either side of Newland Beck within and immediately north
west of the hamlet of Newland and includes the blast furnace and some of
its adjacent buildings; the leat and infilled water wheel pit associated
with the blast furnace; the buried remains of part of the nearby charcoal
barn complex together with an old trackway, loading platform, bridge
abutment and retaining wall; the blacking mill and its adjacent associated
buildings, and the leat that provided the waterpower for turning the water
wheels at the blacking mill. The monument is divided into four separate
areas of protection.

Newland Furnace was built in 1746-47 by Richard Ford and his associates in
what came to be known as the Newland Company. It was used to cast, smelt
or make pig iron, or any other sort of iron or cast metal including 3 to
32 pounder round shot which was produced for the Office of Ordnance at
Woolwich. The fuel used was charcoal, and iron of excellent quality was
produced using the rich local haematite iron ore. In 1783 a forge, now
converted into a domestic dwelling, was added in order to convert cast or
pig iron into wrought iron. In 1799 a rolling mill was constructed in
order to roll metal to specific thicknesses, but by the mid-19th century
this building had become a blacking mill where charcoal was ground and the
finished product used to line the foundry moulds and to put a smooth
finish on castings. During the early 19th century the Newland Company
became Harrison, Ainsley and Company. In 1874 considerable improvements
were made to the furnace which enabled coke and coal to become the fuel
used in the manufacture of iron. A general depression in the iron trade
led to the closure of Newland Furnace in 1891. During the remainder of
that decade some fittings were removed to a furnace at nearby Backbarrow
and further dismantling was undertaken at the time of World War I. The
furnace building was used as part of a wheelwright and funeral director's
business during the early 20th century while the blacking mill became a
sawmill about the same time.

The water-powered charcoal-fired blast furnace is located at SD30007971
amongst a rubble-built, slate-roofed complex of associated buildings, now
partly roofed and partly ruinous. The furnace stack is a substantial stone
structure, square in plan, with battered walls. It has wide splayed
openings in its west and south sides, the former being the blowing arch,
the latter the casting arch. The shaft inside the furnace stack has a
square stone rubble base within which was built the hearth and the
crucible into which the melt settled as the charge in the shaft above was
in blast. Above this the furnace shaft is lined with refractory bricks
which had to be renewed as necessary after successive blasts. Attached to
the west side of the furnace stack is a multi-phased three storey
structure which combined within it the blowing house, where bellows to
increase the air flow to the furnace were housed, a bothy for
accommodating workmen, and the charging house from where charcoal and iron
was carried to the top of the furnace. The charging house occupies the top
floor; it was extended to the west during the 19th century over a head
race or leat which fed Newland corn mill some 50m to the south. The bothy,
which occupied the first floor, was entered by a door at the south end of
the west wall; its floor has now been removed. The blowing house on the
ground floor still retains a number of substantial stone blocks which were
used as supports for the machinery of the bellows. On the south side of
the furnace stack is the casting house where the molten iron was cast; it
is now a roofless shell. The building has wide openings in its east wall,
some of which are now blocked; these are thought to have assisted
ventilation when molten iron was being run off. These openings also gave
access to a storeroom which is shown on photographs of the site taken in
the mid-1890s. The east and south walls of this storeroom have been
demolished but the west wall adjacent to the east wall of the casting
house survives as does the north wall which is incorporated in the south
wall of a building that was added to the east side of the furnace stack.
Situated on the northern side of the blowing house is the water wheel pit,
now largely infilled. The water wheel powered the bellows machinery and
the water came from Newland corn mill head race which was taken off
Newland Beck some 80m to the north west. The water escaped through a
channel on the north side of the wheel pit, however its course has not yet
been traced. A short distance north west and uphill of the wheel pit
stands the substantial multi-phased charcoal barn complex. The upstanding
buildings are now used as a coal depot and are not included within the
scheduling. However, the buried remains of a substantial part of the
second charcoal barn, thought to have been demolished after closure of the
furnace in 1891, are included. These buried remains lie beyond the south
west corner of the surviving charcoal barn complex at SD29957970 and
documentary sources indicate that the remains are approximately 31m long
by 9m wide. An old trackway runs behind the site of the second charcoal
barn and continues to a loading platform immediately behind the upstanding
north-south oriented original charcoal barn. Adjacent is a loading bridge
abutment; maps show a loading bridge running from a road behind and above
the charcoal barns complex into the original charcoal barn. At its road
end the bridge opened from a semi circular parking area with a stone
revetment wall.

The blacking mill, thought to have originally been a rolling mill, is
located at SD29897981. After ceasing to be a blacking mill it had become a
saw mill by 1913, then a piggery. It is now roofless and is reduced to its
stone rubble walls. The west wall near the beck has two blocked openings
thought to relate to the support of water wheel axles. Water to power the
wheels was stored in a large mill pond to the north and fed via a rock cut
leat on the west of Newland Beck which led from the south west corner of
the dam to a timber launder. This launder carried the water across the
beck to the rolling mill water wheel at the north end of the mill's west
wall. A photograph shows that latterly this wheel was replaced by one
positioned at the southern end of the mill's west wall with the launder
being subsequently extended along the west side of the mill. A short tail
race, now infilled, led water from the water wheels back into the beck. In
the blacking mill waste charcoal, also known as slack, from the iron
furnace charcoal barns would be ground down to a fine powder by placing it
within a circular iron pan and crushing it using a heavy rotating edge
grinder. To the south of the blacking mill is a range of buildings of
stone rubble construction with slate roofs. The northern end of the range,
part of which has been rebuilt in brick, consists of two single storey
rooms thought to latterly have been used as a cartshed and stable, while
the southern end of the building is two storey. This range is thought to
originally have been charcoal drying rooms, a storeroom and the manager's
dwelling. Cast iron rather than timber was used to support the roof of
this range, an innovative safety feature given the flammable nature of
dried charcoal.

The surfaces of all paths and access tracks, a telegraph pole, all modern
walls, a low concrete platform immediately south of the upstanding
charcoal barn complex, a flight of stone steps and its flanking walls on
the south west side of the furnace complex, a timber footbridge across the
leat north of the furnace complex, and a gate and gateposts at the south
west corner of the charcoal barn complex are all excluded from the
scheduling, although the ground beneath these features is included.

The blacking industry was predominantly a by-product of the iron industry
and is generally concentrated around areas high in forge and foundary
work, especially where there is a predominance of coppice woodland used
for charcoal making. Blacking is a fine charcoal dust or powder used to
coat the face of moulding sand when producing good quality metal castings,
the powder giving a smooth finish to the casting and helping to release
the casting after it had solidified. It was also used as a filter for
clarifying domestic water in the days before piped supplies became common.
Blacking was also applied to fire grates, boilers and kitchen ranges.
Features associated with the blacking industry include drying stores,
grinding mills within which grinding pans and edge grinders would be
housed, water wheels for driving the grinders, and leats, dams and mill
ponds for supplying the water power to drive the water wheels.

Newland blast furnace, the blacking mill and the buildings and water
management systems associated with both the blast furnace and the blacking
mill survive reasonably well and are a rare surviving example of the
juxtaposition of iron and blacking industry production. In particular the
importance of the blast furnace lies in part, in the preservation of the
furnace, store, casting house, blowing house, bothy and charge house group of
buildings. Additionally the charcoal drying house with its innovative cast
iron roof support is considered to be one of the earliest attempts at
fireproofing such a structure in Cumbria. Its survival is regarded as unique
in the north of England.