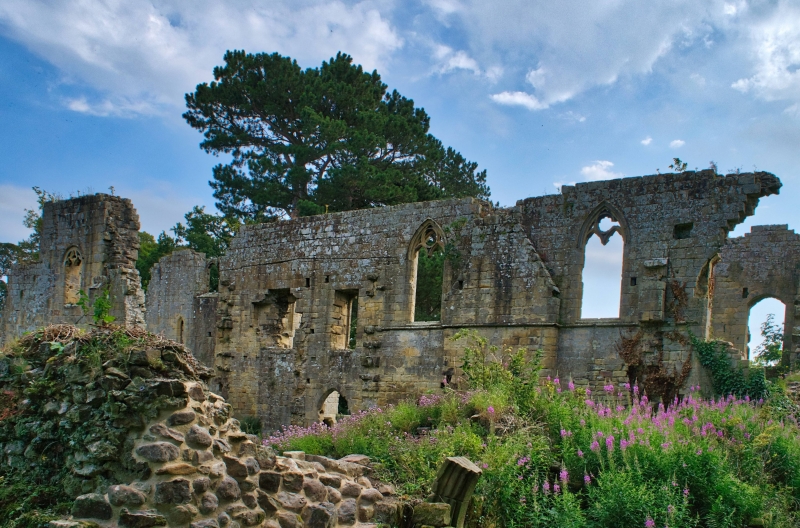 Following the Dissolution of the monasteries it was common for surviving
remains to be partly reused by their new owners. High status houses built
in the post-Dissolution period comprise a distinctive group of buildings
which differ in form, function, design and architectural style from
country houses of both earlier and later date. They are the products of a
particular historical period in which a newly-emerged Protestant elite of
lawyers, courtiers, diplomats and other officials, mostly with close
contacts at court, competed with each other to demonstrate wealth, taste
and loyalty to the sovereign, often overstretching themselves financially.
Many designs and stylistic details were copied from Continental
pattern-books, particularly those published in the 1560s on French,
Italian and Flemish models. Symmetry in both plan and elevation was an
overriding principle, often carried to extremes in the Elizabethan
architectural `devices' in which geometric forms were employed to express
religious and philosophical ideas. This complex network of influences
resulted in liberal and idiosyncratic combinations of architectural styles
which contrasted with the adoption of the architecture of the Italian
Renaissance, later in the 17th century. The grand house also had a grand
garden, the most characteristic feature being a core of regular or
geometric layout, typically located and orientated in relation to the
major residences of which they formed the settings. Garden designs are
numerous and varied and include a number of recognisable components such
as flat-topped banks or terraces, walkways, waterways, ponds and
multi-walled enclosures. Other features fashionable across the period
include: mounds used as vantage points for views and vistas, walled closes
of stone or brick, fountains, statuary and garden buildings such as
summerhouses and pavilions. In addition to formal geometric planting
arrangements some areas were set aside as romantic wildernesses. Formal
gardens were created throughout the period as a routine accompaniment of
the country seats of the landed elite. The grand house and gardens have a
particular importance reflecting the social expectations and aspirations
of the period. They represent a significant and illuminating aspect of the
architectural and artistic tastes of the time and provide an insight into
politics, patronage and economics in the early post-medieval period. All
examples with significant surviving archaeological remains are considered
to be of national importance.
By the 19th century fashion had changed and the regular formality of
gardens had given way to the more natural approach of the Picturesque
Movement. Although design changed some themes remained consistent such as
the careful positioning of garden structures to afford specific views and
vistas. Similar to earlier grand houses the country house and associated
landscape of the 19th century also reflected the status and position of
their owners. Icehouses were underground structures designed specifically
to store ice, usually removed in winter from ponds and used in the summer
for preserving food and cooling drinks. They were initially built only by
the upper level of society, but by the end of the 18th century they were
commonplace and can be regarded as a significant component of local
distinctiveness and character. Icehouses only became obsolete after the
introduction of domestic refrigerators in the early 20th century.
During World War II munitions and stores were held throughout the country
and remains of these are extremely rare given their temporary nature, thus
the features at Jervaulx offer important insight into the development of
munitions storage during this period.
Taken together the surviving remains at Jervaulx demonstrate the changing
use of the land over at least 1000 years. The monastic remains, both
ruined buildings and buried features within the wider precinct survive
particularly well. As well as the monastic remains the monument preserves
important evidence of earlier agricultural activities and demonstrates the
changes in taste, fashion and social attitudes of the provincial elites
from the post-medieval period to the present day.