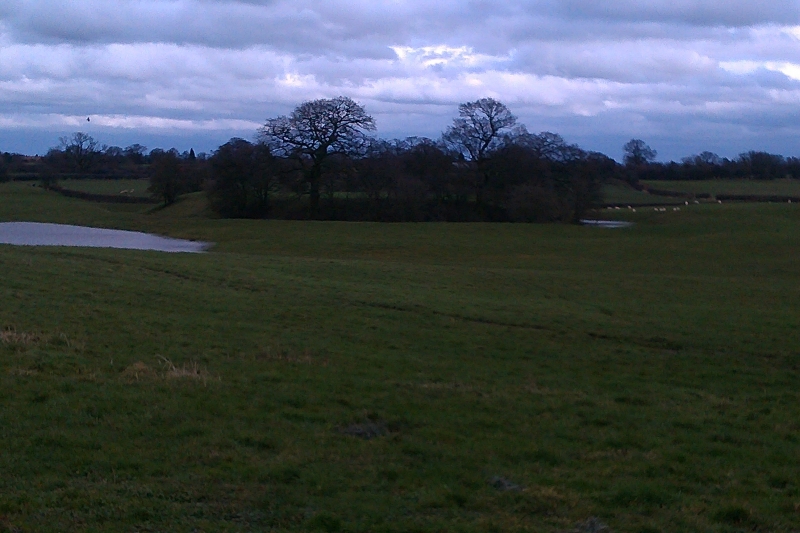 The monument includes the earthwork and buried remains of a motte and bailey
castle, occupying a low-lying position in an area of undulating and formerly
marshy land. From this location there are extensive views to the east and
north east, including the nearby town of Whitchurch where an early medieval
castle is also known to have been built.
The oval, steep-sided, flat-topped motte measures approximately 62m by 78m at
its base and 47m by 60m across the top and stands to a height of 4.5m. It is
surrounded by a waterlogged ditch, between 7m and 15m wide, and a large outer
bank, averaging 17m wide and up to 1.2m high. Within the northern part of the
ditch is a causeway. As part of a small-scale archaeological investigation
conducted in 1916 this causeway was partly excavated and the remains of a
bridge were found.
Occupying the sloping ground to the south of the motte is a large
parallelogram-shaped bailey. The earthwork defences enclose an area of nearly
2ha. It is defined on the western and southern sides by a rampart between 7m
and 13m wide, and standing up to 1.5m high, with an external ditch averaging
14m wide which retains water. To the east the bailey is defined by a scarp up
to 1m high. The adjacent external ditch has been infilled and is no longer
visible at ground level, but will survive as a buried feature about 12m wide.
The northern side is bounded by a natural depression where the slopes appear
to have been deliberately accentuated in places. Across this depression a
raised causeway has been constructed, which probably connected to a bridge
providing access to the motte. On the western side of the bailey, about the
mid-point, there is a break in the defences, which has been enlarged in modern
times but may represent the site of an original entranceway into the bailey.
The causeway across the south west corner of the defences is entirely modern.
A series of drainage ditches cutting across the bailey and the low-lying
surrounding ground appear to be post-medieval and modern in date. Within the
bailey, on the eastern side, are the remains of two small rectangular ponds,
constructed to provide water for livestock.
All fence posts, the water trough and the surrounding concrete slabs, are
excluded from the scheduling, although the ground beneath all these features
is included.

The motte and bailey castle known as Pan Castle is a well-preserved example of
this class of monument. The small-scale excavation has demonstrated that
extensive buried remains of structures that stood on the motte and within the
bailey can be expected to survive. Buried structures, together with associated
artefacts and organic remains, will provide valuable evidence about the
activities and lifestyles of those who inhabited the site. In addition,
organic remains preserved in the buried ground surfaces beneath the motte, the
external bank and the bailey rampart, and deposited within the ditches, will
provide information about the local environment and the use of the land prior
to and following the construction of the motte and bailey castle. The
importance of the castle is enhanced by its proximity to, and contemporary
association with, the nearby medieval settlement at Whitchurch.