A Scheduled Monument in Prettygate, Essex 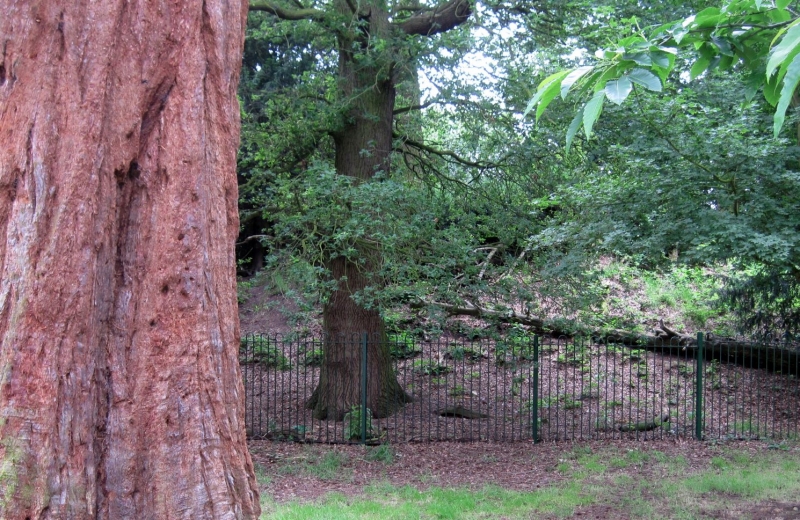 The monument includes the buried and upstanding remains of Lexden Mount, an
earthen burial mound, or barrow, located in the garden of No 11 Wordsworth
Road, south of London Road and some 2.5km west of Colchester town centre.

The barrow is circular in plan, measuring some 30m in diameter and 5m high.
The mound may originally have been completely conical in profile, but by
1759, when William Stukeley included an illustration of the barrow in his
study of the earthworks on Lexden Heath, the summit appears to have been
flattened. Stukeley, who referred to the mound as `Cunobelini Tumulus'
(the burial of the British king Cunobelin), depicted the barrow crowned by
an ornamental copse, encircled by a low wall or hedge and ascended by a
path across the northern slope.

The single documented investigation of the barrow took place in 1910 under the
auspices of the Morant Club. Excavation was limited in scale but the
approximate date of the barrow was established by the presence of fragments of
Roman tiles in the material of the mound. The central burial area was found to
have been disturbed or robbed at an earlier date.

All fences and garden features are excluded from the scheduling, although the
ground beneath these features is included.

Earthen barrows are the most visually spectacular survivals of a wide variety
of funerary monuments in Britain dating to the Roman period. Constructed as
steep-sided conical mounds, usually of considerable size and occasionally with
an encircling bank or ditch, they covered one or more burials, generally
believed to be those of high-ranking individuals. The burials were mainly
cremations, although inhumations have been recorded, and were often deposited
with accompanying grave goods in chambers or cists constructed of wood, tile
or stone sealed beneath the barrow mound. Occasionally the mound appears to
have been built directly over a funeral pyre. The barrows usually occur
singly, although they can be grouped into "cemeteries" of up to ten examples.
They are sited in a variety of locations but often occur near Roman roads. A
small number of barrows were of particularly elaborate construction, with
masonry revetment walls or radial internal walls. Roman barrows are rare
nationally, with less than 150 recorded examples, and are generally restricted
to lowland England with the majority in East Anglia. The earliest examples
date to the first decades of the Roman occupation and occur mainly within this
East Anglian concentration. It has been suggested that they are the graves of
native British aristocrats who chose to perpetuate aspects of Iron Age burial
practice. The majority of the barrows were constructed in the early second
century AD but by the end of that century the fashion for barrow building
appears to have ended. Occasionally the barrows were reused when secondary
Anglo-Saxon burials were dug into the mound. Many barrows were subjected to
cursory investigation by antiquarians in the 19th century and, as little
investigation to modern standards has taken place, they remain generally
poorly understood. As a rare monument type which exhibits a wide diversity of
burial tradition all Roman barrows, unless significantly damaged, are
identified as nationally important.

The Roman barrow known as `Lexden Mount' lies within the borders of an
extensive late Iron Age settlement surrounding modern Colchester
(`Camulodunum' in antiquity). This settlement, or territorial oppidum (after
the Latin `oppida' for town), encompassed an area of about 25 sq km
between the converging courses of the River Colne and the Roman River to the
west of the Colne estuary. In addition to the rivers the settlement was
defined and protected by the largest group of linear earthworks of the
period in Britain.

These dykes have been interpreted as an expression of the settlement's status,
as a means to control and protect grazing stock and as an effective defence
against chariots - one of the principal features of later Iron Age warfare.
The interior of the oppidum is thought to have been largely agricultural - a
mixture of enclosed fields, pasture and woodland - with small occupation sites
scattered throughout and two particularly large and complex areas of activity
located at Gosbecks to the west and Sheepen to the north. Associated with the
settlement sites are burial grounds, the most prominent of which are The
Mount, Lexden Tumulus, a group of excavated burial enclosures at Stanway
(beyond the western dykes) and a similar (unexcavated) enclosure at Gosbecks.
These sites reflect the beliefs and complex burial rituals afforded to the
society's elite. A large number of less elaborate burials have also been
discovered across the oppidum.

Camulodunum was clearly of central importance to the region in AD 43 when it
formed the primary military objective for the invading Roman army. After the
collapse of local resistance the Emperor Claudius personally led his
victorious forces into the oppidum, which was subsequently reorganised to
provide a centre of provincial government and bridgehead for the further
conquest of Britain. As the focus of military activity shifted further north
and west the fortress established at Colchester was redesignated as a
`colonia', a chartered town for a colony of retired soldiers. `Colonia
Victricensis' (City of Victory) was the first Roman town established in
Britain and thus the earliest truly urban settlement in the country. Native
settlement and burial practices continued within the territorial oppidum which
was probably run as a `civitas' or self governing town.

Although partly excavated in 1910 (and found to have been previously
disturbed) Lexden Mount remains substantially intact. Although the central
burial, most possibly that of a native aristocrat, has been disturbed, further
burials may remain undisturbed both beneath the barrow and within the sides
of the mound. The mound itself will contain valuable evidence for the date and
manner of its construction, and the old ground surface, sealed at the time of
the barrow's construction, may retain evidence of funerary rituals or earlier
activity within this part of the oppidum. The Mount is one of the more
prominent funerary monuments of Camulodunum and, together with the other
high status burial sites in the area, provides significant insights into the
continuation of elite burial practices under Roman government.