A Scheduled Monument in Stanway, Essex 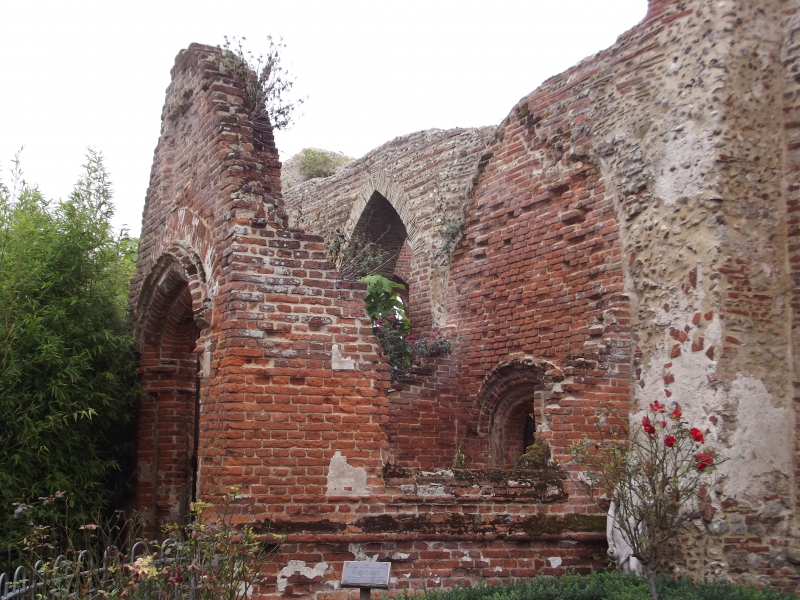 The monument includes the buried and standing remains of All Saints Church,
which lies in an isolated position within a predominantly rural landscape some
2.5km south of the village of Stanway. Originally the parish church of Great
Stanway, it was converted into a private chapel of the Stanway Hall estate in
the early 17th century.
The early church, dating to the 13th century, was a simple two celled-church
comprising a nave and a chancel. The 13th century walling is of coursed
sub-rectangular Kentish ragstone blocks, flint rubble and significant amounts
of reused Roman tile and brick. The remains of these walls survive in the
nave, to a height of 3m to 3.6m externally and 2.3m to 3.3m internally, and
the buttresses of the south nave wall are contemporary with this period.
Documentary references from the 13th century include a church valuation of
1254 and a reference to the parish church at Great Stanway dated 1291.
During the latter part of the 14th century the nave collapsed and was rebuilt.
This new work can be seen in the south, east and west walls of the nave - the
upper courses of medieval peg-tile being particularly characteristic of this
period. In the 15th century the church was enlarged with the construction of
the west tower, the addition of the north aisle and the insertion of a
three-bay arcade. The mainly brick built tower survives largely intact.
In the early 17th century the church was converted into a private chapel. This
conversion is evidenced by the blocked arcade (with the north nave door
constructed through) and chancel arch, and the brick built north porch. The
chancel and north aisle were demolished at this time. No further structural
activity of note appears to have taken place, other than blocking and repair,
after the church became disused in the late 17th or early 18th century. By the
early 18th century, the building was said to be utterly decayed and all the
material of the roofs has subsequently been lost. The church is Listed Grade
II.
Sometime during the 20th century a large sectional cast-iron water tank was
inserted into the bell chamber of the tower.
The water tank, all modern fencelines and paths around the church, telegraph
poles and lines and a modern shed on the south side of the nave are excluded
from the scheduling; however, the ground beneath these features is included.

The surviving fabric of All Saints Church graphically illustrates its
history: its development from a 13th century simple two-celled structure into
a fairly large 15th century parish church, and then its conversion into a
smaller private chapel in the 17th century. The sequence of events evident in
the surviving fabric can be tied into the documented history. Further elements
of the 12th to 15th century church no longer visible above ground will survive
below ground, in particular the foundations of the 13th century nave and the
15th century north aisle demolished in the 17th century.
Underneath the present church there may lie the remains of an earlier
foundation. The manor of Stanway is listed in the Domesday Book. The name
Stanway is formed from two Anglo-Saxon words - stan, meaning stone and weg or
waeg, meaning way, the name originating from the proximity of two Roman roads
to the parish. The church also may have originated during this period under
the auspices of the adjacent hall. If so, the archaeological remains of this
earlier church can be expected to survive as buried features.
The ground beneath the church and immediately alongside is also likely to
contain burials related to both the parochial and later private use of the
building.