A Scheduled Monument in Westgate, Newcastle upon Tyne 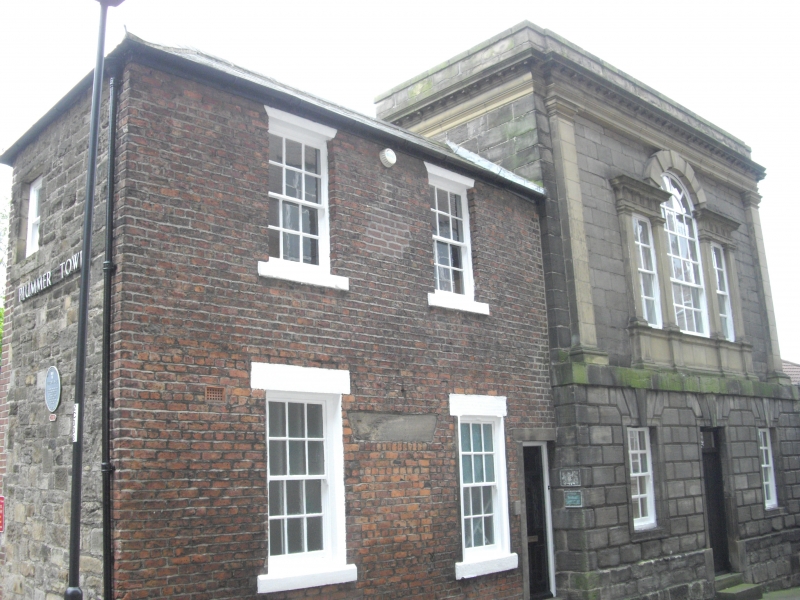 The monument is situated at the southern end of Croft Street immediately
opposite Plummer House. It includes the upstanding and buried remains of part
of the town defences of Newcastle upon Tyne. The section of town defences in
Croft Street represent part of the eastern side of the circuit and includes
two short lengths of curtain wall, a tower and a 17th century bastion. The
tower and the upstanding length of curtain wall are a Listed Building Grade I.
Further sections of the town defences to the south and west are the subject of
separate schedulings.
Newcastle upon Tyne town defences were constructed from the mid-13th century
to the middle or late 14th century enclosing an area of more than 60ha; the
riverside lengths of curtain wall were added during the 15th century. The
masonry defences were strengthened by a berm and a ditch, except on the south
side where they were bounded by the River Tyne. Gateways were built at the
principal points of entry to the town. Internally a cobbled inter-mural lane
followed the line of the defences. The defences were refurbished during the
medieval period and were reinforced and repaired several times during the
post-medieval period.
The first length of curtain wall within this section is attached to the south
side of the tower and is 7.6m long, standing 4.25m high to the parapet
walkway. Rising above the walkway, the parapet is 1.15m high and is complete
with its ridged coping stones. Two building phases are visible in this short
stretch of curtain wall indicating that the curtain wall and the attached
tower were built separately. Excavation in 1989 showed that the wall has
rubble foundations within a trench 0.70m deep. On the external face, the
curtain wall retains a double chamfer.
Within the thickness of the curtain wall near its junction with the tower,
there is a small irregularly shaped chamber; although not visible today,
antiquarians recorded the existence of a blocked doorway connecting this
chamber to the ground floor of the tower. It is thought that the area of the
modern mural chamber was, in medieval times, the site of a short stair rising
from within a corner of the tower giving access to the wall walk. The second
length of curtain wall, attached to the north side of the tower, is about 6m
long and is thought to survive as a buried feature below the 19th century
extension to the north of Plummer Tower.
The tower, known as Plummer Tower projects some 4m from the outer face of the
curtain wall. It is visible as a semicircular shaped structure constructed of
coursed and squared ashlar sandstone standing up to 4.5m high. Above two of
the lower courses of the tower there is an external chamfer course. Excavation
in 1989 showed that the tower was founded on a single course of angular
sandstone blocks laid within a trench about 0.28m deep. Although the interior
of the tower has been much altered, it is thought that it contained a single
chamber covered by a vaulted roof.
At the time of the Civil War, Plummer Tower was converted into an artillery
bastion by the addition of an outwork surrounding the tower on its north, east
and south sides. During the 1989 excavations part of this structure was
uncovered; it was revealed to consist of an arrow-shaped stone built structure
whose outer face was visible as ashlar sandstone with a rubble core resting on
reused wooden planks. Within the area examined a single wooden beam was set
horizontally within the stone wall where it would have projected beyond the
wall of the bastion; this feature is thought to have served as a form of
timber lacing. Outside the stone built bastion there was a berm 1m wide
flanked by what was thought to be a substantial flat-bottomed ditch. Partial
excavation of the deposits within the ditch produced pieces of pottery and
other objects dating from the mid- to late 17th century. Three musket balls
were recovered from excavation trenches to the north, east and south of the
bastion. Although the full extent of the bastion was not uncovered, its form
suggests that it is of arrow head type with the point of the arrow immediately
opposite, and 7m from, the centre of Plummer Tower.
The tower was modified further during the 17th century when it housed the
Company of Cutlers and during the 18th century when it was obtained by the
Company of Masons. During the 18th century an upper storey and a new western
facade were added and subsequently a new external stair was built to the south
side of the tower. In the 19th century, when the upper levels of the curtain
wall were levelled to provide building stone, an extension to the north of the
tower was added.
The 18th century upper part of the original medieval tower, above the
chamfered offset plinth, is excluded from the monument. The drain pipe
attached to the east wall of the tower and all fixtures and fittings
associated with the conversion and use of the tower for commercial purposes,
are excluded from the scheduling although the structure to which they are
attached is included. The 19th century extension on the north side of the
tower, the 18th century western facade, the external staircase on the west
face of the curtain wall and all paving, walling and hard surfaces are
excluded from the scheduling although the ground beneath all of these features
is included.

Between the Roman and the post-medieval periods a large number of English
towns were provided with defences. These defences also served to mark the
limits of the town or its intended size and could be used to defend the town
in times of trouble. Their symbolic role in marking out the settlement was
also significant.
Newcastle was first granted permission to build a town wall in 1265. It
enclosed the Roman and medieval core of the town and served to form its
protection throughout the medieval and post-medieval periods. Building of the
wall began on the north side of the town and continued around the eastern and
western sides simultaneously. During its construction, the planned line of the
walls was changed; on the west side, where it had been heading towards the
castle, the walls turn abruptly south towards the river, and on the east side,
they make an eastwards extension in order to enclose the suburb of Pandon,
granted to Newcastle upon Tyne in 1298.
The curtain wall is of squared and coursed sandstone blocks, although the
ashlar varies considerably in character and quality. Where excavation has
taken place, the wall is seen to have been constructed in a narrow foundation
slot, straight onto the ground surface or on a broad raft of sandstone blocks.
Above the foundation base there is a double chamfered plinth which in some
places is stepped down in order to accommodate a change in the gradient. The
wall also displays great variety in thickness and height; the height range
from the top of the footings to the wall walk of all the upstanding sections
of the curtain wall is from 4.4m to 6.6m. The thickness of the wall
immediately above the double chamfered plinth ranges from 1.98m to 3.3m. The
curtain wall was surmounted by a parapet walkway, and where it survives it
varies in height from 1.53m to 1.68m above the top of the wall walk. The wall
contained 17 interval towers which projected forwards from the line of the
wall and about 40 intermediate turrets, normally flush with the outer face of
the curtain wall but overhanging the internal face on a series of corbels.
Gateways were built at Newgate, Westgate, Closegate, Sandgate, Pandongate and
Pilgrimgate, each defended by a pair of gatehouses. A lesser gateway at
Sallyport and two posterns, Blackfriars and Whitefriars, were also built.
The wall was strengthened by an external ditch up to 20m wide and 4.5m deep
separated from the wall by a berm (a level space between a defensive wall and
a ditch in order to defend it). The ditch, known as the King's Dykes, was
completed in 1316, sometime before completion of the wall.
The defences continued to function as the town's main form of defence through
to the 19th century. During the 16th and 17th centuries, the towers and some
of the gates became the meeting places of a variety of town companies who
generally added an upper storey to form a meeting hall. The defences were
reinforced during the English Civil War in 1638 when England was threatened by
invasion from Scotland. The town was stormed in 1644 by the Scots acting in
support of Parliament; the defences were subsequently repaired. In 1745, at
the time of the Jacobite uprising, the defences were repaired against the
rebels which included walling up all of the gateways. The defences were last
repaired at the time of the Napoleonic Wars in the early 19th century.
Subsequently, when the threat had passed and with the continuing development
of Newcastle upon Tyne, their function as a defensive town boundary ceased.
The walls were allowed to fall into decay, and several sections were levelled
in the years following 1823.
Newcastle upon Tyne's town defences survive in various states of preservation.
Some parts of the curtain wall still stand to full height, and the towers and
turrets are also clearly visible. The ditch is also clearly visible for part
of the western side as a pronounced earthwork. Other parts of the defences are
no longer visible above the present surface of the ground, but in these areas
sections of the walls and the ditch survive below ground level as buried
features, and sufficient evidence exists for their positions to be accurately
identified.
Given the role played by the town defences in one of England's major
commercial towns, and their contribution towards an understanding of medieval
and later urban development, all sections of Newcastle's town defences that
exhibit significant archaeological remains are considered to be nationally
important.
In spite of the fact that they have been modified in the post-medieval period,
the standing and buried remains of the medieval town defences in Croft Street
survive reasonably well. The length of curtain wall containing a tower is a
rare survival, particularly on the east side of the circuit, where the curtain
wall and its associated features are visible in few locations. The survival of
a 17th century bastion, constructed to strengthen the defences of Newcastle
during the Civil War, is the only surviving example known on the defensive
circuit, and this enhances the importance of the remains. As a monument which
is visible to the public, this section of Newcastle's town defences serves as
an important educational and recreational resource which will increase our
understanding of how Newcastle's defences developed through time.