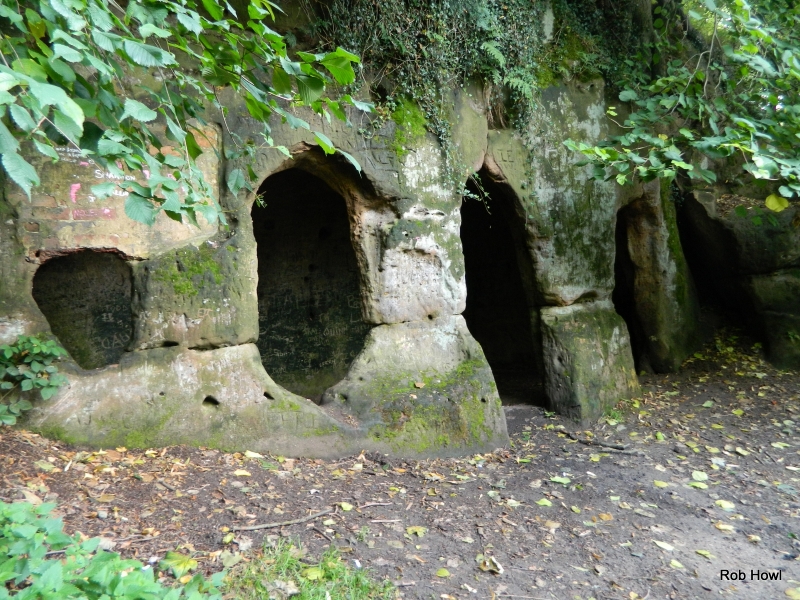 Church of England Parish: Stanton-by-Dale St Michael and All Angels

The monument includes the rock cut and buried remains of a hermitage which is
situated approximately 250m south east of Dale Abbey on the south side of Sow
Brook.
The hermitage was first mentioned in the 12th century. It is believed that it
was created by a baker from Derby who had a vision which told him to go and
live in Depedale (the old name for Dale village). When he arrived he found the
place was a marsh, `exceedingly dreadful and far distant from every habitation
of man'. He carved a small dwelling and altar from the rock, and lived there
`by day and night, he served God in hunger and thirst and cold and nakedness'.
On seeing the poverty of the hermit, Ralph Fitz Geremund, a local dignitary at
the time, gave him his mill and tithe at Borrowash. The hermit later moved to
a cottage and oratory which he built to the west of the hermitage.
The monument survives as a rock cut cave which has internal measurements of
approximately 6m east to west and 2.75m north to south. On the eastern wall
inside the cave is a carved cross. On the north face are two doorways with
rough ogee arches, and two windows, one of which has been partly blocked. All
are carved through the local bedrock. Above the doors and windows on the
external face are the remains of at least four joist holes and creasing, which
suggest that there was a building attached to the rock shelter on the northern
side. Further remains of this structure are believed to survive beneath the
ground surface on the northern side outside the cave.

Following St Augustine's re-establishment of Christianity in AD 597,
monasticism formed an important facet of both religious and secular medieval
life in the British Isles. Although most monasticism centred on communities,
some men and women chose to live solitary lives of contemplation and
simplified religious observance, akin to those of the Christian fathers and
early British saints. They lived in what we now refer to as hermitages,
occupying secluded sites such as isolated islands and caves in river banks,
marshy areas or forests. The hermits lived off alms or under the patronage of
the nobility who established hermits to pray for the souls and well-being of
their families. Hermitages were generally simple, comprising a dwelling area,
an oratory or room set aside for private prayer, and perhaps a small chapel.
Hermitages fell out of favour with the general dissolution of religious
establishments in the middle of the 16th century. Around 500 hermitages are
known from documents but the locations of very few have been identified and
this is therefore a rare monument type. All examples which exhibit surviving
archaeological remains are worthy of protection.

The rock cut and buried remains of Dale Abbey hermitage, 170m south east of
All Saints Church, provide a rare and well preserved example of this type of
monument. The documented history of the site and its relationship to Dale
Abbey combine with the rock cut and buried remains to provide a detailed
picture of the religious landscape around Dale village. Taken as a whole, the
site will contribute to our knowledge and understanding of monasticism during
the medieval period.