Market cross at the junction of Bath Street, Union Street and Church Street

A Scheduled Monument in Cheddar, Somerset 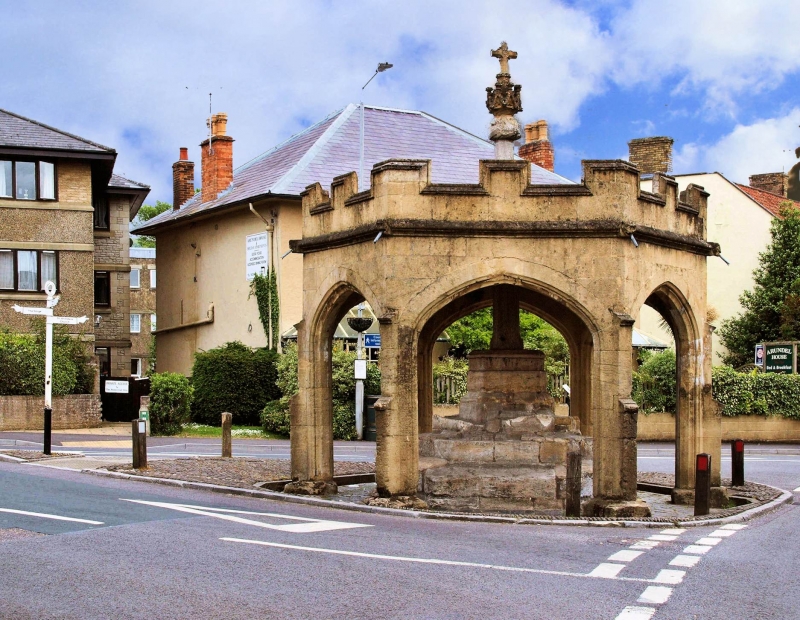 The monument includes a medieval market cross located in the town centre at
the junction of Church Street, Bath Street and Union Street. The ashlar market
cross which is Listed Grade II* was constructed in two stages. The initial
stage of construction, dating from the 15th century includes a three stepped
octagonal base surmounted by a socket stone which supports an octagonal shaft.
The sides of the lower base step are 1.9m long and 0.56m high; the sides of
the upper step are 1.1m long and 0.25m high. Each face of the socket stone is
0.45m wide and 0.9m high. The shaft is set into the socket stone and is square
at the base, tapering to an octagon and crowned by a carved abacus with
niches, each containing a sculpted figure. The second stage of construction
took place during the 16th or 17th century and includes a hexagonal open
arched structure which encloses the original cross. The six arches, formed by
low buttressed piers, 1.9m apart and 3.2m high, support a solid embattled
parapet which encloses a hexagonal tiled roof with wooden rafters through
which the shaft passes. The original wooden rafters were replaced in 1834.
Gargoyles with lead drainage pipes are mounted on each angle of the parapet.
The present cross head was erected after 1877.

Despite having been partly restored the market cross at the junction of Bath
Street, Union Street and Church Street, in Cheddar, retains some fine late
medieval features. It provides a focal point at a junction of three roads in
the town centre and is a highly visible reminder of the town's prosperous
past.