A Scheduled Monument in Harbottle, Northumberland 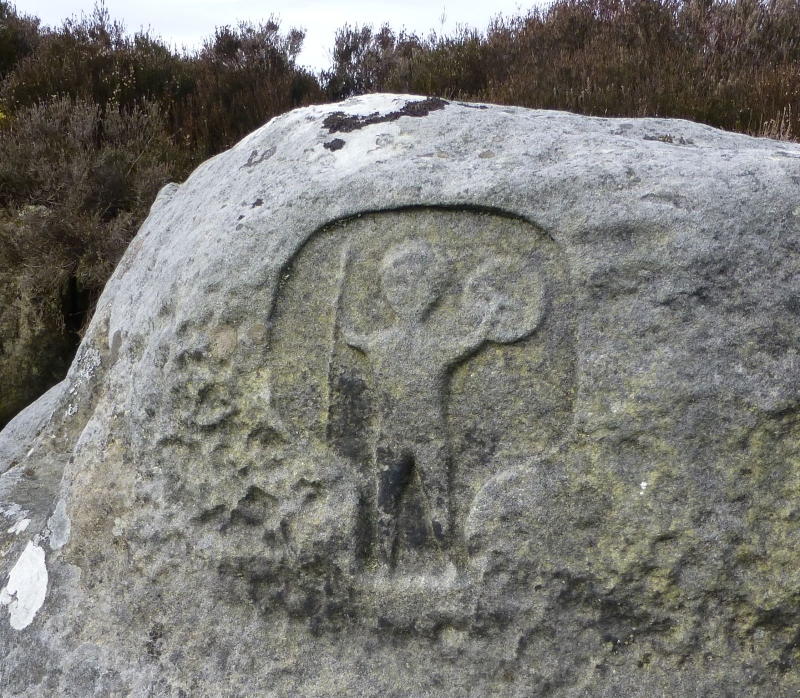 The monument includes the remains of a shrine of Romano-British date, situated
at 300m above sea level, immediately below the summit of a long ridge on the
right bank of the Rowantree Cleugh. The shrine is visible as a roughly square,
natural chamber formed in bedrock; the east side is assembled from large
boulders, leaving an opening 0.45m wide at the north east corner which opens
onto a natural gully. The chamber is 2m square and between 1.5m to 2m high. On
the north side of the chamber there is a rock cut ledge which originally
supported one side of a roof. Immediately to the east of this feature there is
a niche 0.4m by 0.15m interpreted as a place to hold a lamp or offerings. On
the rock face at the north side of the entrance there is a carved figure 0.32m
high and 0.20m wide within a small niche 0.36m high by 0.32m wide. The figure,
which is unclothed except for a cap or helmet, stands with feet apart and arms
outstretched. It holds a spear in its right hand and a small round shield in
its left hand. The style of the figure is that of a Celtic god but the nature
of the craftsmanship indicates a Roman artist. The carving has been identified
as the local Celtic god Cocidius.
The shrine was excavated in 1980 when evidence of human modification of
the natural chamber was found. This included tool marks caused by cutting away
the bedrock along the west wall of the chamber in order to create a low bench,
and an attempt to dress the south door jamb of the chamber. A post hole was
also uncovered set into the bedrock floor of the shrine adjacent to the
doorway, and a threshold had been created by the laying down of a single layer
of small stones. A small hearth was also discovered in the south east corner
of the chamber associated with a crude attempt to create a chimney or flue.
The excavation also uncovered evidence that the chamber had seen use in modern
times.

Roman religion had adopted wholesale the classical pantheon of the Greeks. To
this the Romans grafted on their own Italic or Etruscan beliefs, frequently
associated with fertility and vegetation, and thus with the conquest of
Britain (AD 43-410) brought to the province classical deities covering a wide
range of functions. The indigenous population of Britain had already evolved a
comprehensive mythology of its own, based partly on the worship of natural
phenomena and partly on those aspects of life it considered vital -
prosperity, fertility, war and death. Roman toleration of native religions
enabled the deities of both conqueror and conquered to intermingle by means of
a process known as syncretism. The Roman god Mars, for example, originally an
Italic deity associated with fertility and untamed woodlands, became linked
with Celtic warrior deities such as Cocidius along Hadrian's Wall.
In the more Romanized parts of the Empire, formal temples were constructed and
could be elaborate structures, but on the fringes of the Empire where pre-
Roman traditions were more likely to continue, as well as the more formal
Romanized temples, places of veneration also took the form of simple round or
rectangular structures which continued the traditions of pre-Roman Celtic
shrines.
Despite the fact that it has been used in later times and has been excavated,
the Romano-Celtic shrine 540m ESE of South Yardhope is well preserved and
retains evidence of its original use. The relief carving is a particularly
fine one and is one of few known rock cut examples in Northumberland. This
carving also illustrates the process of syncretism as practiced in the
frontier region of northern England during the Roman occupation.