A Scheduled Monument in Osgodby, Lincolnshire 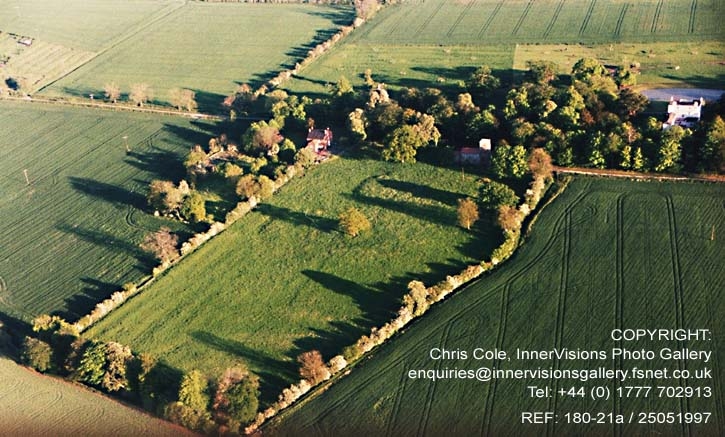 The monument includes the remains of a motte and bailey castle, constructed
before 1216, and those of an early medieval church and associated
ecclesiastical complex. At the time of the Domesday survey the manor of
Kingerby was held by the Bishop of Lincoln; in the 12th century it was
tenanted by the Amundeville family, who founded an Augustinian hospital (later
priory) at Elsham 20km to the north, granting to it the advowson of Kingerby
church. During the 12th and 13th centuries a planned village was established
around the castle, including an ecclesiastical complex around the church where
the priory's holding, including a vicarage and tithe barn, was located. In
1216 the castle was burned and then ordered to be destroyed, following which
the motte was altered to create a platform for a moated manorial residence.
During the 17th century the village became depopulated as arable land was
converted to sheep pasture. In 1812 the late medieval manor house was replaced
by the present Kingerby Hall and stable block, which are Listed Grade II and
are excluded from the scheduling, although the ground beneath them is
included.

The remains of the medieval castle are located on the south side of the
present lane immediately south west of St Peter's Church. Kingerby Hall
occupies the south western part of a roughly circular platform which is raised
approximately 1.5m above the surrounding ground level. This platform is
believed to represent the remains of a motte which was partly levelled in the
later Middle Ages for the construction of a manor house. The buried remains
of the manor house, part of which remained standing until the end of the 18th
century, are believed to survive within those of the earlier motte. The
platform is surrounded on all sides by the remains of a moat, from which the
earth forming the motte was originally excavated. The moat was altered in the
post-medieval period as a feature of the gardens of Kingerby Hall; two
causeways were constructed on opposite sides of the platform separating the
north eastern half of the moat, which continues to hold water, from the south
western half, which was partly infilled and is now visible as a broad
depression, except in the south western corner where it has been redug to
create an ornamental pond. Adjacent to the east and west of the moated
platform are the remains of two `L'-shaped baileys which meet on the south
side of the moat; these take the form of raised embanked enclosures bounded
around most of the exterior by a shallow depression representing the remains
of a hollow way. In the southern part of the west bailey the inner bank has
been partly levelled and the hollow way infilled, although it will survive as
a buried feature. The northern part of the west bailey is bounded by a linear
ditch, beyond which is a broad external bank, overlain by the present lane,
which separated it from contemporary house plots adjacent to the north. The
remains of the medieval village of Kingerby formerly extended to both the
north and west of the castle but have been largely destroyed by modern
cultivation and are not included in the scheduling.

The hollow way which runs outside the northern edge of the east bailey is
partly overlain by the present lane; approximately 30m west of the church it
turns northward where it survives as a broad depression. In the angle of this
hollow way are the remains of a large rectangular enclosure representing the
holding of Elsham Priory at Kingerby.

Standing on a raised rectangular platform in the south west part of the
enclosure is the Church of St Peter, a Listed Grade 1 early medieval church
with later alterations. The earliest fabric in the church is believed to date
from the 11th century, indicating continuity of occupation over at least a
thousand years. The present church consists of a nave with clerestory, south
aisle, porch, chancel and western tower. The tower is of three stages of
diminishing height with a shallow cornice moulding at the top, made of
ironstone repaired with brick. In the east side of the tower, exposed above
the nave roof, the earlier roof pitch of the nave can be seen. As this is cut
by the 13th century string course, it is likely that this represents a
probable 11th century Anglo-Saxon nave roof pitch. The west wall of the nave
has a blocked circular window (indicating an Anglo-Saxon/Norman date) and is
clearly earlier than the tower, which is built up against it. In addition,
inside the tower the butt joint, where the tower was built up against the pre-
existing nave west wall can be clearly seen.

The nave's king post-roof is early 17th century and a fine example with four
arch-braced moulded tie beams decorated with a carved heart at the west end,
and circular rosettes on the undersides of the two central beams. The aisle
roof is 18th century. At the west end of the nave at a high level, behind the
roof tie beam is a deeply splayed circular opening dating from the early 11th
century, which possibly represents the original west light of the Anglo-Saxon
church.

The raised platform extends beyond the limits of the present churchyard and is
believed to represent its former extent; on the south side it is partly
overlain by the present lane. To the north and east of it are the earthwork
remains of the western half of the ecclesiastical enclosure, in which the
priory's tithe barn was located.

Limited archaeological excavation in this area has demonstrated the survival
of below ground remains including stone building foundations. A documentary
source of 1270 refers to the presence of a hall and gatehouse. The complex is
bounded on the north by a further hollow way, beyond which are the remains of
medieval ridge and furrow cultivation extending to the former course of the
Kingerby Beck. The eastern part of the enclosure, in which gardens and
paddocks may have been located, has been altered by tree-planting and modern
cultivation and is not included in the scheduling.

Excluded from the scheduling are Kingerby Hall, its stable block, the Listed
Grade II entrance piers in the grounds of Kingerby Hall, the Listed Grade II
17th century tomb in St Peter's churchyard and all standing buildings, walls,
fences, gateways as well as the surfacing of the modern road, although the
ground beneath all these features is included.

The remains of the medieval castle at Kingerby survive well as a series of
substantial earthworks and associated buried deposits. The alteration of the
castle in the late medieval period to create a moated manorial site caused
limited damage to earlier remains while enhancing the interest and complexity
of the site; post-medieval and modern activities have also had a limited
effect. Waterlogging in the area of the moat, and the fills of ditches and
hollow ways, will preserve valuable evidence for the original construction of
the castle and for its alteration and occupation throughout this period.

The remains of the castle are associated with those of an ecclesiastical
complex, which also survive in the form of earthworks and buried
archaeological layers. The church is a fine example of a medieval parish
church showing development and alterations throughout its active history. As a
result of historical and archaeological investigation the nature of the
remains and their relationship to those of the castle is quite well
understood. The churchyard preserves unique evidence for a human population
spanning at least a thousand years, while the buried remains of the priory's
tithe barn will preserve structural, artefactual and environmental evidence
for economic activity on the site. Together, the castle, the church and
ecclesiastical complex represent a rare survival of the physical remains of a
relationship which was an essential and distinguishing component of medieval
society.