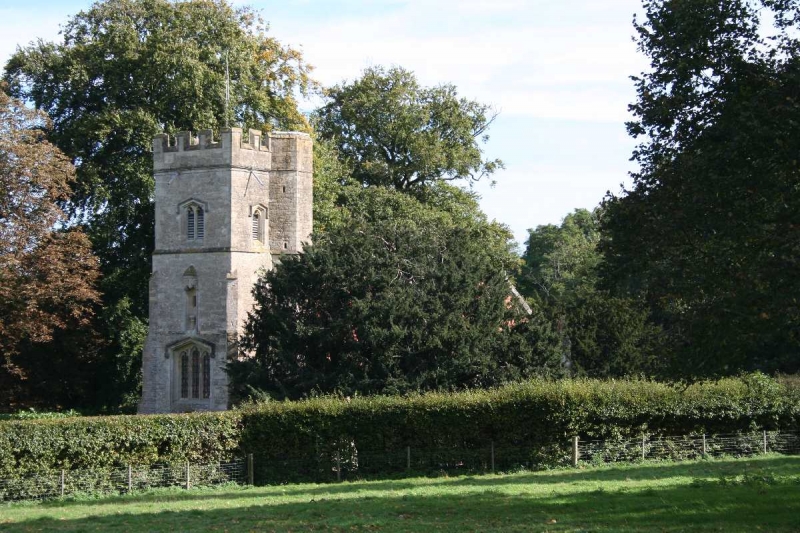 The monument includes a 15th century chantry known as Rycote Chapel which is
situated close to Rycote House in Rycote Park.
The chantry, which was consecrated in 1449, was founded by Richard and Sybil
Quatremayne of Rycote and was dedicated to St Michael. It is built of coursed,
squared limestone rubble with ashlar dressings obtained from the Taynton
quarries. The chapel includes a chancel, a nave and west tower. The nave and
chancel were built as a single structure of five bays delineated by stepped
buttresses. At the eastern end is a four centre arched window with five lights
and panel tracery. The side windows are all two light, with shallow arches of
triangular form with labels. At the west end of the north side is a fine four
centre arched doorway with moulded square surround and recessed spandrels with
quatrefoils, and there is a corresponding but plainer doorway on the south
side.
The tower is built in three stages with a crenellated top. It has a door in
the west side with a pointed moulded arch above which is a three light
triangular headed window and a canopied niche. The belfry has two light
openings with triangular heads.
The roof (which was partly repaired in the 1960s) is of a continuous wagon
style and was originally painted.
The bench pews and the base of the chancel screen are contemporary with the
building. The western gallery, the pulpit and two elaborate canopied pews,
including a supported musicians' gallery are dated to c.1610. The internal
wooden fixtures and fittings are included in the scheduling.
The elaborate baroque reredos is dated to 1682 and has four fluted Corinthian
columns and a segmented pediment. There are also barleytwist communion rails
of a similar date and later alterations include a marble bust of 1767
commemorating James Bertie, Earl of Abingdon.
To the north stands Rycote House on the probable site of the original manor
house and adjacent to the house of Sir John Heron, treasurer to Henry VIII,
which was built after 1521. This was altered after 1539 by Sir John Williams,
later Baron Williams of Thame and played host to both Elizabeth I and Charles
I. There are surviving drawings of the house in c.1695 and in 1714 prior to it
burning down in 1745. The only remains to survive the subsequent demolition
and the building of the present house are a section of wall and one tower,
both Listed Grade II*. The medieval village of Rycote Magna is believed to
have been located close to the church although its exact location within the
estate remains a matter of conjecture. The remains of Rycote House, the tower
and wall, the medieval village and the churchyard are not included in the
scheduling.
Ryecote Chapel is in the care of the Secretary of State and is a Grade I
Listed Building.

Rycote Chapel is an exceptional example of this class of monument. It retains
its original wooden features including the bench pews and the rood screen
base. In addition it contains a number of early wall paintings and good
quality later additions, notably the musicians' gallery of 1610. The chapel is
open to the public and as such forms an important educational amenity.