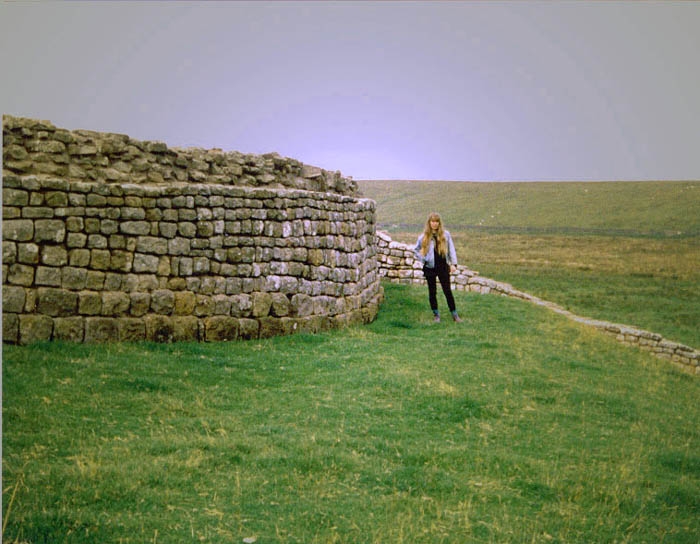 Hadrian's Wall marks one of the frontiers of the Roman Empire. The
international importance of the surviving remains has been recognised through
designation as a World Heritage Site.
The military importance of the Tyne-Solway route across the Pennines was
recognised by the Romans during their early campaigns through northern England
and into Scotland in the second half of the first century AD. At this time a
military road, the Stanegate, was constructed along with a series of forts.
Subsequently the Romans largely withdrew from Scotland and there is evidence
that the Tyne-Solway route was being recognised as a frontier by the start of
the second century AD. This position was consolidated in the early second
century by the construction of a substantial frontier work, Hadrian's Wall,
under the orders of the Emperor Hadrian. Hadrian's successor, Antoninus Pius,
subsequently attempted to establish the boundary further north, between the
Clyde and the Firth of Forth, but by c.AD 160 growing unrest amongst the
native populations of northern Britain and pressures elsewhere in the Empire
caused a retraction back to the Hadrianic line. Hadrian's Wall was then the
frontier of the Roman Empire in Britain until c.AD 400 when the Roman armies
withdrew from Britain.
Stretching over 70 miles from coast to coast, Hadrian's Wall was a continuous
barrier built of stone in the east and, initially, of turf in the west. The
stone wall was originally designed to be ten Roman feet wide and sections of
this width are termed broad wall. A change of plan shortly after construction
began led to a reduction in the width of the Wall to eight Roman feet, such
sections being termed narrow wall. Today, stretches of both wall types
survive, including some sections of narrow wall built on broad wall
foundations. For most of its length a substantial ditch on the northern side
provided additional defence. Where the Wall crossed rivers, bridges were
constructed to carry it across. Construction of the Wall was organised and
executed by legionary soldiers. From the beginning the barrier was planned to
comprise more than just a curtain wall. At regularly spaced intervals of about
a mile along its length lay small walled fortlets known as milecastles. These
were attached to the southern side of the Wall and most had a gateway through
the Wall to the north. Hence they controlled crossing points through the Wall
as well as affording space for a small stable garrison. Between the
milecastles were two equally spaced towers known as turrets. Together the
milecastles and turrets provided bases from which the curtain wall could be
watched and patrolled. Both the turrets and milecastles are thought to have
been higher than the Wall itself to provide suitable observation points. It is
often assumed that a platform existed on the Wall so that troops could
actually patrol along the wall top; it is however far from certain that this
was the case.
At the western end of the Wall a system of towers, small fortlets and palisade
fences extended the frontier system another 30 miles or so down the Cumbrian
coast and helped control shipping moving across the estuary of the Solway
Firth.
As originally planned, and apart from whatever space there was in the
milecastles, provision for the accommodation of garrison troops manning the
Wall was left with the line of forts which already lay along the Stanegate. At
some point a fundamental change of plan took place and forts were constructed
along the line of the Wall itself. There are now known to have been 16 forts
either attached to the Wall or in close association with it. Some overlay
earlier features such as turrets or milecastles. At this stage another linear
element, the vallum, was also added to the defensive system to the south of
the Wall. This was a broad flat-bottomed ditch flanked by a pair of linear
banks. It shadows the course of the Wall for almost all its length, sometimes
lying very close to it but sometimes up to a kilometre away from it. The
vallum's main function was to act as a barrier to restrict access to the Wall
from the south. It also had a function in linking the forts along the Wall
with a method of lateral communication. When the forts were placed along the
wall line no provision was made for a road to link them. This situation was
clearly found impracticable and a metalled track was therefore provided in
places along the vallum between the north mound and the ditch.
Later, after the withdrawal back to the Hadrianic line from the Antonine Wall,
various refurbishments were made throughout the frontier line. At this stage a
new linear feature was added: the `Military Way'. This was a road linking all
elements of the Wall defence, running from fort to fort within the area
bounded by the Wall and the vallum.
Throughout its long history the Wall was not always well maintained. It was
often neglected and sometimes overrun, but it remained in use until the late
fourth century when a weak and divided Roman Empire finally withdrew its
armies from the Wall and Britain.
It now survives in various states of preservation. In places, especially in
the central section, the Stone Wall still remains several courses high and the
attached forts, turrets and milecastles are also clearly indentifiable.
Earthwork features such as the ditch, vallum and Military Way also survive
well in places. Elsewhere the Stone Wall has been virtually robbed out and
only its foundations survive beneath the present ground surface. Similarly,
stretches of the earthwork remains, including sections of the Turf Wall, have
been levelled or infilled and now only survive as buried features. Although
some sections of the frontier system no longer survive visibly, sufficient
evidence does exist for its position to be fairly accurately identified
throughout most of its length.

Housesteads Roman fort and its associated features in the section of Hadrian's
Wall between the field boundary west of milecastle 36 and the field boundary
west of turret 37a survives well as a series of upstanding and buried remains.
Significant information on the development of the frontier system over time
will be preserved. Housesteads is probably the best preserved Roman fort on
display in England. It has produced many significant archaeological finds
including quantities of statuary, altars, inscriptions, pottery and small
finds. The silted ditches will contain environmental evidence which will allow
the character of the surrounding area in the Roman period to be better
understood.