A Scheduled Monument in Rollright, Oxfordshire 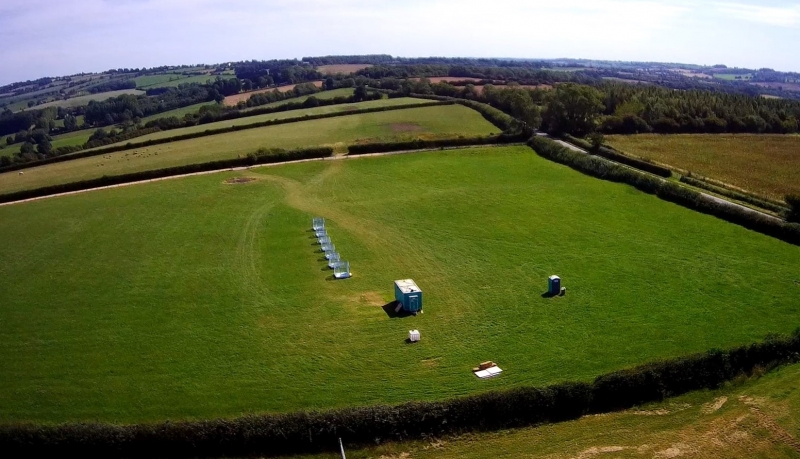 The monument includes an Iron Age enclosed settlement site consisting of two
ditched enclosures, pits and further features including part of a Late Bronze
Age or Early Iron Age ditched trackway. The site lies 150m north east of the
King Stone within the vicinity of the Rollright Stones prehistoric monument
group on the Oxfordshire - Warwickshire border, the subject of a separate
scheduling. The site lies on a slight but broad ridge aligned roughly east to
west, along which trackways have run since prehistoric times.
The settlement is no longer visible at ground level but survives buried below
the present ground surface, and is clearly visible as cropmarks on aerial
photographs. These marks are caused by the richer soil in ditch fills causing
the crops to grow taller with darker shades of colour than the surrounding
crop. The main enclosure is approximately 40m in diameter and is slightly oval
in plan. The second enclosure is smaller, being only about 20m in diameter,
and lies to the north west. A section of trackway runs from the west of the
monument towards the main enclosure.
The main enclosure was first noted by William Stukeley in 1743 when it was
still visible as an upstanding earthwork. It was relocated from aerial
photographs taken in 1961 which also showed the second enclosure for the first
time. The main enclosure was subsequently partly excavated in 1982 as part
of a wider project investigating the monuments of the area.
This showed the enclosure to be surrounded by a rock-cut ditch with a stone
wall on its inner side. This would have provided a formidable defence at the
time and enclosed an area of approximately 0.26ha. Located within this
enclosure were pits shown to have served as grain storage pits and at least
two cess pits. The pits and posts extended outside the defended enclosure
however, and may represent different phases of settlement related to changing
levels of security felt by the inhabitants.
Finds from the excavation included pottery from the local area and of a type
believed to have originated at Droitwich in the West Midlands. An infant
burial, animal skulls and fragments of animal bones were also found associated
with several features in and around the enclosure.
The second enclosure although not excavated is expected to include a similar
range of features and finds.
The trackway, also partly excavated in 1982, was shown to be probably
earlier than the excavated section of the settlement. Ploughsoil of Iron Age
date found surviving along its course represents all that remains of a once
much more extensive field system.
Excluded from the scheduling are all boundary fences, although the ground
beneath them is included.

The size and form of Iron Age enclosed settlements vary considerably from
single farmsteads up to large semi-urban oppida. Farmsteads are generally
represented by curvilinear enclosures containing evidence of a small group of
circular domestic buildings and associated agricultural structures. Where
excavated, these sites are also found to contain storage pits for grain and
other produce, evidence of an organised and efficient farming system. The
surrounding enclosures would have provided protection against cattle rustling
and tribal raiding.
In central southern England, most enclosed Iron Age farmsteads are situated in
areas which are now under intensive arable cultivation. As a result, although
some examples survive with upstanding earthworks, the majority have been
recorded as crop- and soil-marks appearing on aerial photographs.

The enclosed Iron Age farmstead settlement 150m north east of the King Stone
is known from aerial photographs and part excavation to survive buried below
the modern plough soil. It has been shown to contain archaeological remains
relating to its construction, occupation and the landscape in which it was
built.
In addition to being a good example of its date and class, the settlement lies
within a small area of the Oxfordshire Cotswolds containing examples of
several rare forms of burial monument of differing dates, which appear to have
acted as foci for ceremonial and ritual activity. This evidence of human
activity within a single area over a period spanning several thousand years
will provide important information on how human activity in the landscape has
changed over time and how farming practices have been affected by both
changing technology and needs. It will also provide information on the
religious and social beliefs of those who occupied the site, and how they were
affected by the physical remains of those who went before them.