A Scheduled Monument in Ticknall, Derbyshire 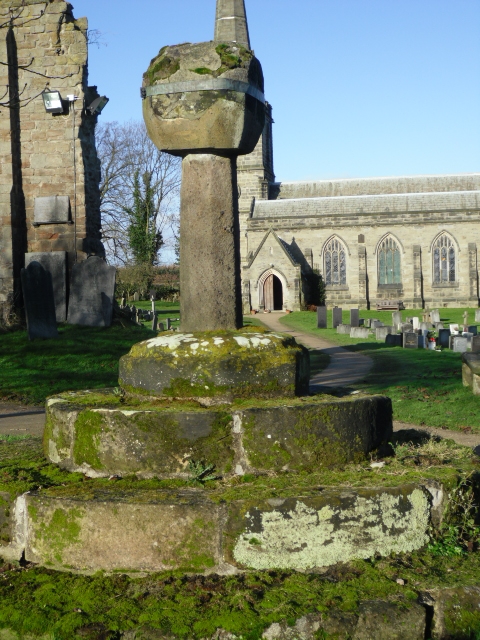 The monument includes the standing and buried remains of Ticknall medieval
church and cross. The remains of the medieval church lie approximately 45m
south of the present church of St George and the cross 10m further south.
The church, originally built as a chapel dedicated to St Thomas Becket, is
first mentioned in about 1200 in a charter of Ralph, the sixth earl of
Chester, but was confirmed, along with the mother church at Repton, to Repton
Priory in 1271 and again in 1279. In the early 14th century it was almost
completely rebuilt and again underwent considerable changes in the 15th
century. After the Dissolution of Repton Priory, the rectorial tithes passed
from the crown to Edward Abell, the Lord of the Manor. In 1625 the manor and
tithes were purchased by Sir John Harper and by 1650 the chapel became the
parish church. In 1692 the church was reported as being in disrepair and
church wardens accounts from 1720 document extensive repairs. In 1755 the
three aisles were re-roofed and leaded and a porch built on the southern side.
Nearly 100 years later the church was completely re-pewed. It was during the
18th century that the cross is believed to have been moved to its current
position in the churchyard, 10m south east of the porch.
In January 1834, the insecure state of the building was reported to Sir George
Crewe, the patron of the church. Because the church only accommodated 350 to
400 people and the population of the parish had increased to around 1500 it
was decided that a larger church should be built. Permission was granted and
the church was blown up with gunpowder in 1841. Some of the stone was used in
the building of the new church which also contained two 14th century monuments
removed from the old church.
The church, a Grade II Listed Building, survives as both above and below
ground remains. Two fragments of the structure survive above ground, including
a section of the east wall of the chancel and the south west angle of the
tower. These are constructed of coursed, squared sandstone and ashlar. The
remains of the tower stand to approximately 6m in height and comprise the
corner, which is defined by angle buttresses, and a section of the south wall
which runs for approximately 1.5m in an easterly direction. A section of the
west wall extends for approximately 2m in a northerly direction and retains
the jamb and the first three voussoirs (shaped stones which form an arch) of a
double chamfered four centred arched window.
Only the lower part of the east wall of the church survives but this retains a
complete three light window, with intersecting tracery, and the beginning of a
return wall running north west. The rest of the church survives as slight
earthworks but these have been degraded in some areas where later burials have
taken place. Despite this degradation the earthworks correlate with 19th
century drawings to provide a clear plan of the church.
Extending north for approximately 9m from the surviving fragment of the east
wall is a low bank which terminates at a line of recent burials. This
represents the east wall of the north aisle, shown on the illustrations to
have ran the full length of the nave and chancery. The north wall of this
aisle has been disturbed by the modern burials which have, during the digging
of the graves, produced fragments of a marble effigy. Further earthworks south
west of the ruined east wall indicate the alignment of the south aisle which
extended from the tower along the full length of the nave. The position of the
porch to the south of the tower is less clearly defined because a network of
modern pathways converge at this point and have distorted the earthworks. A
low mound, to the west of the main path leading to the present church,
probably represents the west wall of the porch. Further remains of the west
wall of the tower have also been distorted by burials. Approximately 12m south
east of the standing remains of the tower is a standing stone cross built in
sandstone. The cross, which is Listed Grade II and principally of medieval
date, was originally a village or market cross which, it is believed, was
moved into the churchyard in the 18th century. It is of stepped form, with a
base consisting of a plinth, two steps, a socket stone, a shaft and the
remains of the cross head. The steps are circular in plan and are constructed
of sandstone blocks resting on a plinth of just over 2m diameter. The socket
stone stands on the upper step and is octagonal in plan with step moulding
around its upper edge. The shaft, which is also octagonal in plan, stands to a
height of approximately 1m and is surmounted by a large irregular square
finial which has been repaired in cement with an iron band. Although moved
from its original location, the cross probably relates to the position of the
18th century south porch and may mark the spot of an earlier cross.
All modern path surfaces, benches and grave markers and the slate altar, built
from grave marker stones, to the west of the east wall remains are excluded
from the scheduling, although the ground beneath these features is included.

A standing cross is a free standing upright structure, usually of stone,
mostly erected during the medieval period (mid-10th to mid-16th centuries AD).
Standing crosses served a variety of functions. In churchyards they served as
stations for outdoor processions, particularly in the observance of Palm
Sunday. Elsewhere, standing crosses were used within settlements as places for
preaching, public proclamation and penance, as well as defining rights of
sanctuary.
Standing crosses were also employed to mark boundaries between parishes,
property, or settlements. Crosses in market places may have helped to validate
transactions. After the Reformation, some crosses continued in use as foci for
municipal or borough ceremonies, for example as places for official
proclamations and announcements; some were the scenes of games or recreational
activity.
Standing crosses were distributed throughout England and are thought to have
numbered in excess of 12,000. However, their survival since the Reformation
has been variable, being much affected by local conditions, attitudes and
religious sentiment. In particular, many cross-heads were destroyed by
iconoclasts during the 16th and 17th centuries. Less than 2,000 medieval
standing crosses, with or without cross-heads are now thought to exist. The
oldest and most basic form of standing cross is the monolith, a stone shaft
often set directly in the ground without a base. The most common form is the
stepped cross, in which the shaft is set in a socket stome and raised upon a
flight of steps; this type of cross remained current from the 11th to 12th
centuries until after the Reformation.
Standing crosses contribute significantly to our understanding of medieval
customs, both secular and religious, and to our knowledge of medieval parishes
and settlement patterns. All crosses which survive as standing monuments,
especially those which stand in or near their original location, are
considered worthy of protection.
The standing and buried remains of the medieval church and cross at Ticknall
are well preserved despite disturbance from burials, footpaths and the attempt
to blow it up in the 19th century. The well documented and unusual history of
the site is particularly important in understanding the medieval and
subsequent settlement of the village and its status within the wider
landscape.