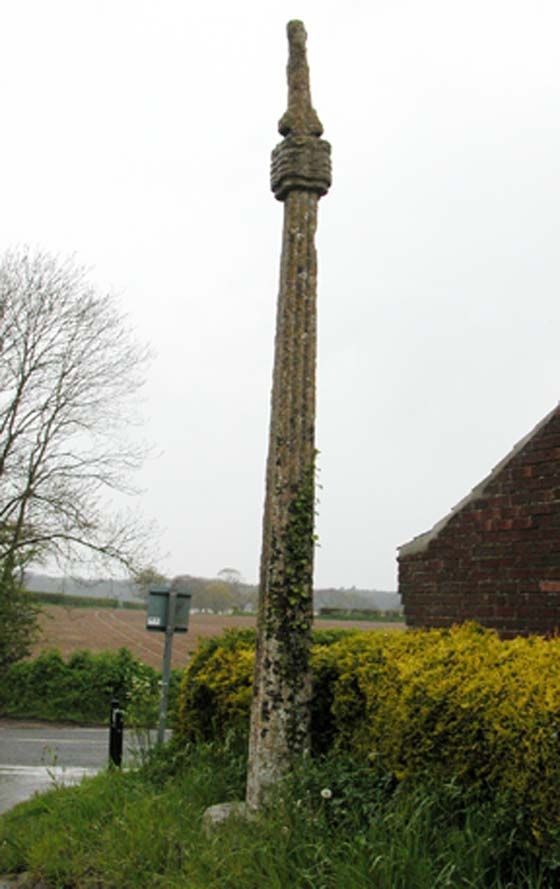 The monument includes a medieval standing stone cross located 120m south west
of Tollgate Farm on the parish boundary between North Walsham and Worstead.
The cross, which is Listed Grade II, includes the socket stone, the shaft, the
capital and the remains of the head. The socket stone is 0.7m square at the
base and 0.36m in height, rising through chamfered corners with stop angles to
an octagonal section on the surface. The shaft, which is mortised into the
socket stone and bonded with mortar, is square in section with rounded corners
and decorated with roll moulding. It measures 0.26m square at the base and
tapers upwards to a height of about 4m. Resting on top of the shaft is the
restored capital. This is quatrefoil in section with horizontal moulding and
measures about 0.26m square by 0.35m high. The capital supports the head,
which although now very worn, is thought originally to have represented the
figure of Christ. The head which faces west, measures about 0.6m in height
tapering upwards from about 0.3m wide at the base to 0.1m wide at the top. The
full height of the cross is about 5.31m.
This cross together with one 300m to the south west (the subject of a separate
scheduling) are thought to relate to the battle at which Henry le Despencer,
Bishop of Norwich, crushed the 1381 Peasant's Revolt lead by Jack Lytester. It
is traditionally believed that one or both crosses were set up after the
battle.
The kerb and the surface of the road to the south of the cross are excluded
from the scheduling, although the ground beneath them is included.

The cross 120m south west of Tollgate Farm is a good example of a medieval
standing cross. It survives particularly well with a square to octagonal
socket stone, a tapering moulded shaft, an elaborate capital and a head which
is thought to represent Christ. Situated close to the site of the 1381 battle
between Henry le Despencer and the peasants, this cross is believed to stand
in or near its original position, and its traditional association with the
commemoration of the battle and its association with another standing cross
300m to the south west gives it additional interest. The cross has not been
significantly restored and has continued in use as a public monument and
amenity from medieval times until the present day.