A Scheduled Monument in Hellesdon, Norfolk 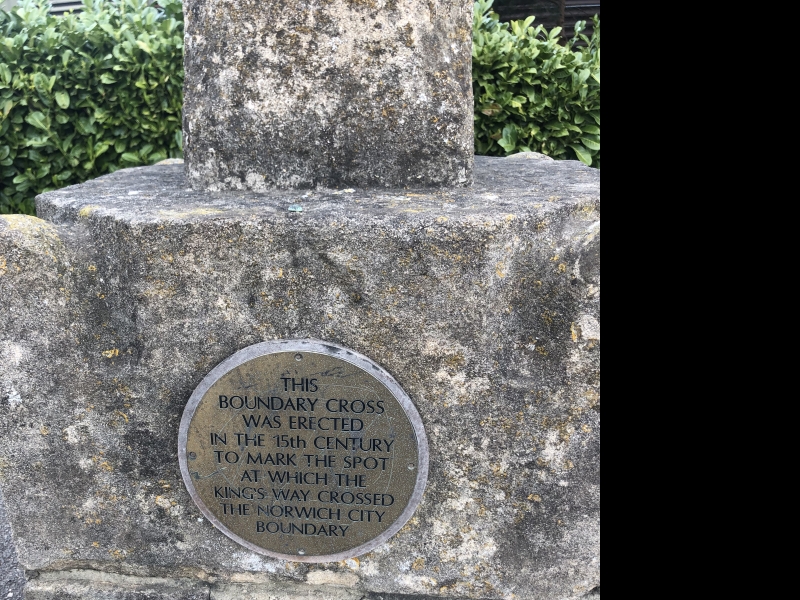 The monument includes a standing stone cross located at the junction of
Drayton High Road and Boundary Road, close to the boundary which separates the
Hellesdon parish from the City of Norwich. The cross dates principally to the
medieval period with some later additions. It includes the base plinth, the
socket stone, the shaft, the capital and the iron head.
The socket stone is set on a plinth, which is constructed of dressed flint
with ashlar corner stones. It measures 0.68m square by 0.49m high. The socket
stone is also 0.68m square and 0.4m in height, rising through chamfered
corners with stop angles to an octagonal section on the surface. Attached to
the south face of the socket stone is a circular bronze plaque inscribed with
the words: `This boundary cross was erected in the 15th century to mark the
spot at which the King's Way crossed the Norwich City Boundary'. The shaft,
which is mortised into the socket stone, measures 0.3m square at the base and
rises through chamfered corners to a tapering octagonal section. The lower
part of the shaft, 1.44m in height is original. The upper part, which extends
for a further 0.68m, and the capital above it are modern additions and are
constructed from a single block of stone. The capital is 0.4m high and
supports the modern iron head which measures about 0.5m high and 0.2m wide and
faces east and west. The full height of the cross in its present form is
approximately 4m.
The pavement, where it falls within the monument's protective margin, is
excluded from the scheduling, although the ground beneath it is included.

The wayside cross at the junction of Boundary Road and Drayton High Road
is a good example of a medieval standing cross with a square to octagonal
socket stone and a square to octagonal shaft. Situated to the north of the
parish boundary separating Hellesdon from Norwich and less than 800m to the
north east of the parish church of St Mary's where another cross, which is the
subject of a separate scheduling, stands in the churchyard, it is believed to
stand in or near to its original position. Most of the cross has survived from
medieval times and subsequent restoration has resulted in its continued
function as a public monument and amenity.