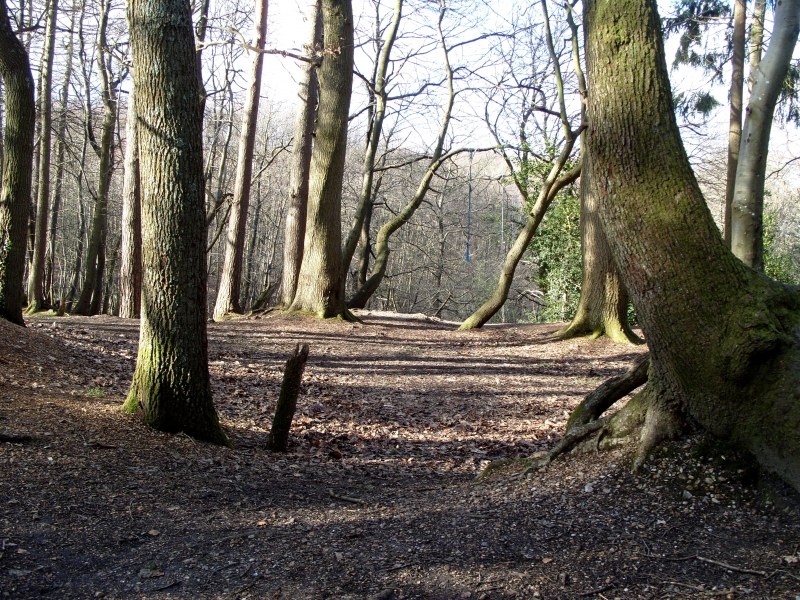 The monument includes the remains of a slight univallate hillfort constructed
on a gravel-capped spur which projects east from a gravel plateau. The
hillfort, the western limit of which has not been precisely defined, was
constructed approximately 250m from the end of the spur and is likely to have
been roughly rectangular or oval in shape. It slopes steeply on the north and
south sides but is easily approached along the spur from the east and west.
The width of the hillfort across the spur is approximately 130m; the length is
unknown but is likely to have been about 190m.
Gravel extraction has caused disturbance to the monument and the interior of
the hillfort survives only as an irregular strip of high ground immediately
within the ramparts and as several remnant mounds of the original ground
surface, now raised up to 4m above the quarried ground level. Surrounding the
interior, the defensive circuit survives in various states of preservation. A
section of the defences survives in good condition on the south and south east
sides as a 2m-3m high rampart, an infilled ditch and 1m high counterscarp
bank. A possible outer infilled ditch or trackway survives at the south east
corner, and traces of a probable quarry ditch survive within the rampart on
the south side. Discontinuous sections of truncated rampart or steepened scarp
survive on heavily disturbed ground along the north and north west sides of
the hillfort, while traces of an infilled ditch and an area of high ground and
mature vegetation indicate the likely location of ramparts on the south west
side. A probable entrance to the hillfort from the east is now buried beneath
the gravel track which crosses the site. A staggered entrance with outworks is
indicated by an apparent eastward projection of the rampart north of the
track.
Later banks and ditches, enclosing medieval woodland and areas of common and
heath, skirt the hillfort to the north and south east and extend onto the
ramparts at the eastern and western ends. A relationship between these
woodlands and a medieval manor house known as `God's House' at Hickley Farm
has been suggested. A 5m-7m wide trackway approaches the hillfort from the
east and skirts around the south east rampart. These bank and trackway
features are included within the scheduling where they abut or run adjacent to
the hillfort. A shallow dewpond is located within the interior of the
hillfort.
The surface of the gravel track that crosses the monument is excluded from the
scheduling, although the ground beneath it is included.

Slight univallate hillforts are defined as enclosures of various shapes,
generally between 1ha and 10ha in size, situated on or close to hilltops and
defined by a single line of earthworks, the scale of which is relatively
small. They date to between the Late Bronze Age and Early Iron Age (eighth -
fifth centuries BC), the majority being used for 150 to 200 years prior to
their abandonment or reconstruction. Slight univallate hillforts have
generally been interpreted as stock enclosures, redistribution centres, places
of refuge and permanent settlements. The earthworks generally include a
rampart, narrow level berm, external ditch and counterscarp bank, while access
to the interior is usually provided by two entrances comprising either simple
gaps in the earthwork or an inturned rampart. Postholes revealed by excavation
indicate the occasional presence of portal gateways while more elaborate
features like overlapping ramparts and outworks are limited to only a few
examples. Internal features included timber or stone round houses; large
storage pits and hearths; scattered postholes, stakeholes and gullies; and
square or rectangular buildings supported by four to six posts, often
represented by postholes, and interpreted as raised granaries. Slight
univallate hillforts are rare with around 150 examples recorded nationally.
Although on a national scale the number is low, in Devon they comprise one of
the major classes of hillfort. In other areas where the distribution is
relatively dense, for example, Wessex, Sussex, the Cotswolds and the
Chilterns, hillforts belonging to a number of different classes occur within
the same region. Examples are also recorded in eastern England, the Welsh
Marches, central and southern England. In view of the rarity of slight
univallate hillforts and their importance in understanding the transition
between Bronze Age and Iron Age communities, all examples which survive
comparatively well and have potential for the recovery of further
archaeological remains are believed to be of national importance.

Despite disturbance by subsequent gravel extraction, the extant defensive
components and interior ground surfaces of the slight univallate hillfort at
Hickley Wood indicate that archaeological remains and environmental evidence
relating to the hillfort's original construction and later use will survive.
The linear bank and trackway features associated with the hillfort are
indicators of the site's later use, probably as medieval woodlands.
The hillfort's urban location within a public access conservation area, and in
which an Armada beacon is also situated, gives it significance as a public
amenity.