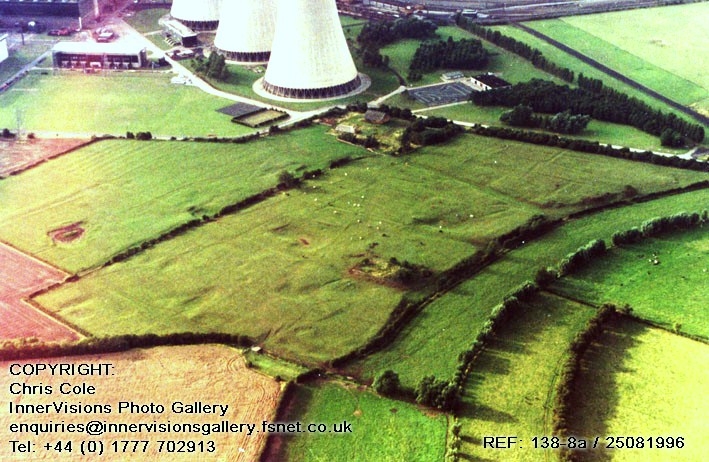 Medieval rural settlements in England were marked by great regional diversity
in form, size and type, and the protection of their archaeological remains
needs to take these differences into account. To do this, England has been
divided into three broad Provinces on the basis of each area's distinctive
mixture of nucleated and dispersed settlements. These can be further divided
into sub-Provinces and local regions, possessing characteristics which have
gradually evolved during the last 1500 years or more.
This monument lies in the Pennine Slope sub-Province of the Central Province,
which embraces the varied scarp and vale topography flanking the higher
portions of the southern Pennines, where narrow escarpments of limestone and
sandstone and softer shale vales give a distinct north-south grain to the
landscape. Dispersed settlement increases from extremely low to medium
densities in the south east of the sub-Province to high densities at the north
west. With the exception of Sherwood Forest, the region is well stocked with
nucleated settlements, some old but others the result of 18th- and 19th-
century industrial developments. Anglo-Saxon `wood' names are common among
placenames, and the area was well wooded in 1086.
The Millstone Grit Scarps local region is an undulating terrain of north to
south sandstone ridges separated by vales. It is characterised by village
settlements, with low densities of scattered dwellings and farmsteads between
them. Many of the villages have, however, grown in recent centuries, and the
medieval settlement pattern was of hamlets and farmsteads set in a woodland
landscape.

Medieval villages were organised agricultural communities, sited at the centre
of a parish or township, that shared resources such as arable land, meadow and
woodland. Village plans varied enormously, but when they survive as earthworks
their most distinguishing features include roads and minor tracks, platforms
on which stood houses and other buildings such as barns, enclosed crofts and
small enclosed paddocks. They frequently include the parish church within
their boundaries. In the central province of England, villages were the most
distinctive aspect of medieval life, and their archaeological remains are one
of the most important sources of understanding about rural life in the five or
more centuries following the Norman Conquest.
Medieval villages were supported by a communal system of agriculture based on
large, unenclosed open arable fields. These large fields were subdivided into
strips (known as lands) which were allocated to individual tenants. The
cultivation of these strips with heavy ploughs pulled by oxen-teams produced
long, wide ridges and the resultant `ridge and furrow' where it survives is
the most obvious physical indication of the open field system. Individual
strips or lands were laid out in groups known as furlongs defined by terminal
headlands at the plough turning-points and lateral grass baulks. Furlongs were
in turn grouped into large open fields. Well preserved ridge and furrow,
especially in its original context adjacent to village earthworks, is both an
important source of information about medieval agrarian life and a distinctive
contribution to the character of the historic landscape. It is usually now
covered by the hedges or walls of subsequent field enclosure.
The earthwork and buried remains of the medieval settlement of West Burton are
particularly well preserved and retain significant archaeological deposits.
The earthworks and historical documentation provide a clear picture of the
village layout and how it fitted within the wider environment. The documentary
sources also provide evidence of how the village was administered and data
indicating reasons for its desertion. Taken as a whole, the medieval
settlement of West Burton will add greatly to our knowledge and understanding
of the development of settlement in the area during this period.
This monument has been reviewed and the mapped depiction amended to more
accurately reflect the extent of the remains in the area immediately east of
Low Farm.