Village cross at junction of Grantham Road and Market Street

A Scheduled Monument in Bottesford, Leicestershire 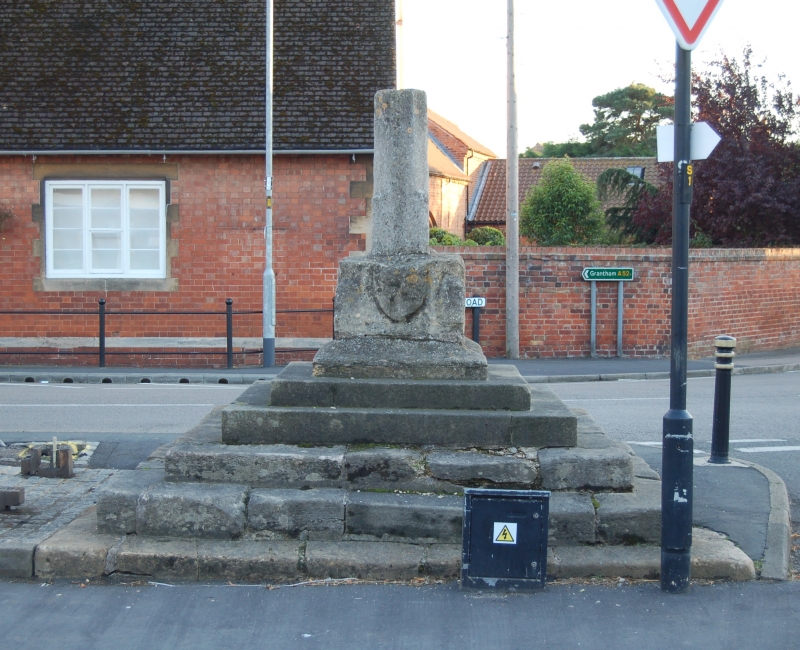 The monument includes the village cross at the junction of Grantham Road and
Market Street. The cross is a standing stone cross of medieval and later date
and is Listed Grade II. It includes a base consisting of five steps, a socket
stone and the remains of a shaft.
The steps are square in plan and constructed from ashlar blocks. On the
uppermost step stands the socket stone, which is 0.74m square at its base and
includes large stop-angles and shields on each of its four faces depicting the
arms of the de Roos family. Set into the centre of the socket stone is the
shaft, of square section at its base, rising through chamfered corners in
tapering octagonal section to a maximum height of 0.97m. The full height of
the cross is 2.47m. The shaft, the socket stone and the majority of the lower
three steps are thought to date from the 15th century. The top two steps are
modern repairs.
The surface of the path, the road, the kerb, the road sign, the electrical box
and the fence posts and paved area around the adjacent stocks are excluded
from the scheduling, although the ground beneath them is included.

The village cross at the junction of Grantham Road and Market Street
represents a good example of a medieval standing cross which is believed to
stand in or near its original position. Limited activity in the area
immediately surrounding the cross indicates that archaeological deposits
relating to the monument's construction and use will survive intact. While
much of the cross survives from medieval times, the subsequent restoration of
segments of the base illustrates its continued function as a public monument
and amenity.