A Scheduled Monument in Hockley, Essex 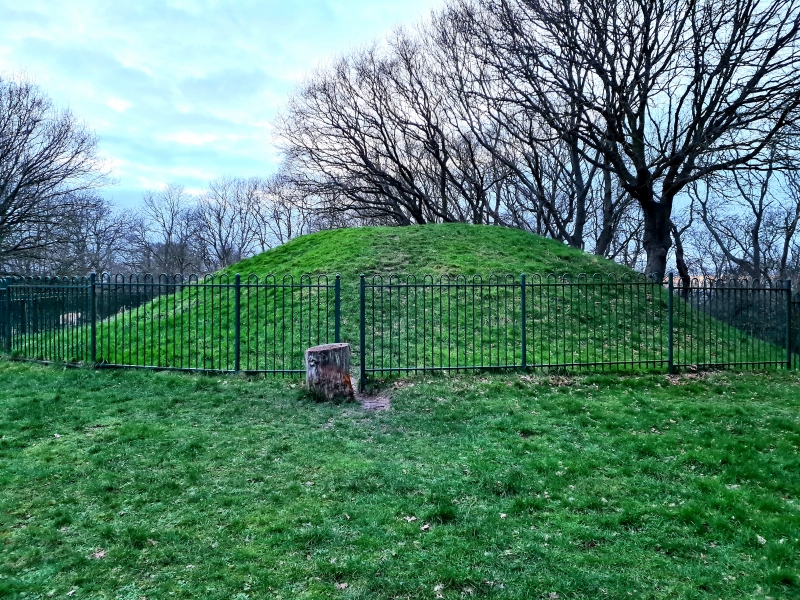 The monument includes the earthen mound known as Plumberow Mount which stands
on the summit of a natural knoll to the north of the town of Hockley, a
position commanding extensive views to the south across the Thames estuary,
and to the north and east over the valleys of the rivers Crouch and Roach.
The mound stands to a height of about 4m and is slightly oval in plan,
measuring approximately 23m from east to west by 18m transversely. A flattened
area on the summit reflects the former position of a summer house. Exploratory
excavations took place in 1913, during which three trenches were cut into
the mound, from the north, east and south sides, extending into tunnels which
met beneath the summer house. Although no evidence of a burial was found, the
excavators did retrieve a coin of the emperor Domitian (c.AD 84), a shale or
jet bead and numerous sherds of Romano-British pottery. Beneath the centre of
the mound a large post hole was found to cut through a gravel surface, which
may have been artificial. A few sherds of Saxon pottery were recovered in the
upper part of the mound during the excavations, perhaps reflecting a later
burial. In the absence of evidence for an encircling ditch, the mound is
thought to have been either constructed from earth and sub-soil deposits
quarried elsewhere, or from material gathered from the surface of the
surrounding hillside.

Despite past disturbance Plumberow Mount survives well and remains a
conspicuous feature in the landscape. Although the 1913 excavations failed to
find evidence for the principal burial, it was demonstrated that the mound was
created no earlier than the first century AD. The interpretation of the mound
as a Roman barrow, although unproven, remains the most probable explanation.
The greater part of the mound remains undisturbed and it is possible that the
burial, if placed away from the centre of the mound (as in a larger Roman
barrow on Mersea Island, 27km to the north east), will remain intact. The
discovery of later pottery fragments within the mound is also highly
significant. Excavations of comparable monuments have demonstrated that
pre-existing monuments were attractive locations for subsequent burials,
especially in the pagan Anglo-Saxon period. Evidence of such activity at
Plumberow Mount would prove highly valuable for the study of post Roman
occupation in the area.