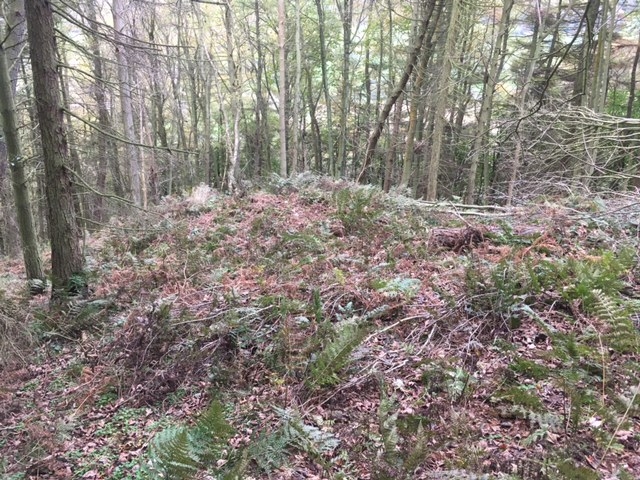 The monument includes a round barrow situated just below the top of the
east-facing scarp slope into the River Derwent valley, towards the northern
edge of the Tabular Hills.
The barrow has an earth and stone mound standing up to 0.8m high. It is round
in shape and measures 9m in diameter. In the centre of the mound there is a
hollow caused by part excavation in the past.
The barrow lies within a dense concentration of prehistoric burial monuments
in an area which also includes the remains of prehistoric settlement and land
division.

The Tabular Hills in the Wykeham Forest area contain a dense concentration of
prehistoric monuments, dating from the Neolithic to the Iron Age, which
includes field systems, enclosures and land boundaries as well as both round
and square barrows. The spatial and chronological relationships between the
round and square barrows in this area, and between both types of barrow and
other prehistoric monuments, are of considerable importance for understanding
the development of later prehistoric society in eastern Yorkshire.
Despite limited disturbance, the barrow 330m south east of Coomb Slack Farm
survives well. Significant information about the original form of the barrow
and the burials placed within it will be preserved. Evidence for earlier land
use and the contemporary environment will also survive beneath the barrow
mound.