A Scheduled Monument in Tickhill, Doncaster 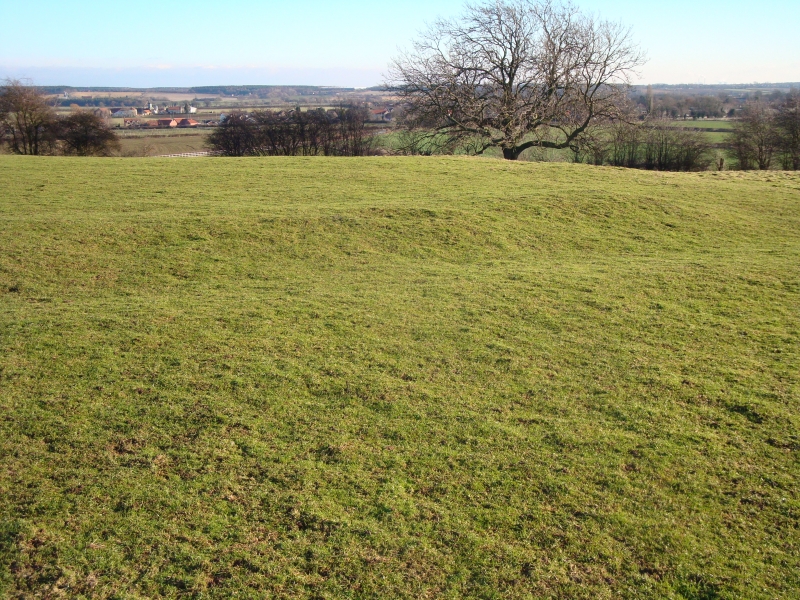 The monument includes the earthwork and buried remains of All Hallows Church,
Dadesley, which lie in isolation on the top of All Hallows Hill, north east of
the town of Tickhill.
The borough of Dadeslie was first mentioned in the Domesday Book of 1086 where
it is recorded as one of two places in the West Riding at that time with urban
status. It is unclear where the associated settlement of Dadesley was
situated, but it is thought to have been the predecessor of the present town
of Tickhill. The church at All Hallows Hill served the area prior to the
Norman Conquest but was replaced, certainly by the 13th century, with the
Church of St Mary situated approximately 1km to the south east in the centre
of Tickhill.
The change in name from Dadesley to Tickhill implies a physical movement of
the settlement possibly from an original site, close to Dadesley church, to
one which developed around the 11th century castle in Tickhill.
The monument survives as a series of earthworks and a geophysical survey has
revealed considerable detail of the underlying archaeological deposits. The
church is aligned east to west, measures approximately 15m long and 7m wide
and includes two sub-rectangular compartments, the nave and the chancel, which
are positioned end to end. These are arranged in a cellular layout, which
means the two were separated by a chancel arch similar to a door. The nave,
which is the larger of the two, lies at the western end. The earthworks
defining the building survive to a height of approximately 0.75m.
The church lies within a small `D' shaped graveyard enclosure which, despite
the removal of some field boundaries, is still clearly visible on the ground.
The eastern edge of the enclosure is still marked by a field boundary. The
enclosure measures approximately 70m by 65m and is approximately 2m higher
than the field to the east, which has been repeatedly ploughed. The enclosure
is defined by a bank which survives up to 1m in height on the southern side
but slightly lower on the northern side. A large amount of stone lies on and
around the site and there are reports that the remains of grave stones have
been recovered. In the time of Richard II it is documented that some stone
from the site was taken and used in the construction of Laughton Chapel in the
later Church of St Mary.
All modern fencing is excluded from the scheduling, although the ground
beneath is included.

The earthwork and buried remains of the Saxon church of Dadesley are well
preserved and retain significant archaeological deposits which will include
important information about the structure, architectural style, ritual use and
status of the church. The well documented and unusual history of the site is
particularly important in understanding the early medieval and subsequent
settlement of the area and its status within the wider landscape. Taken as a
whole, the Saxon church of Dadesley will greatly enhance our understanding of
religion and economy during the Saxon period and the position of these within
the wider social landscape.