Round barrow cemetery and hollow ways on Beacon Hill

A Scheduled Monument in Warnford, Hampshire 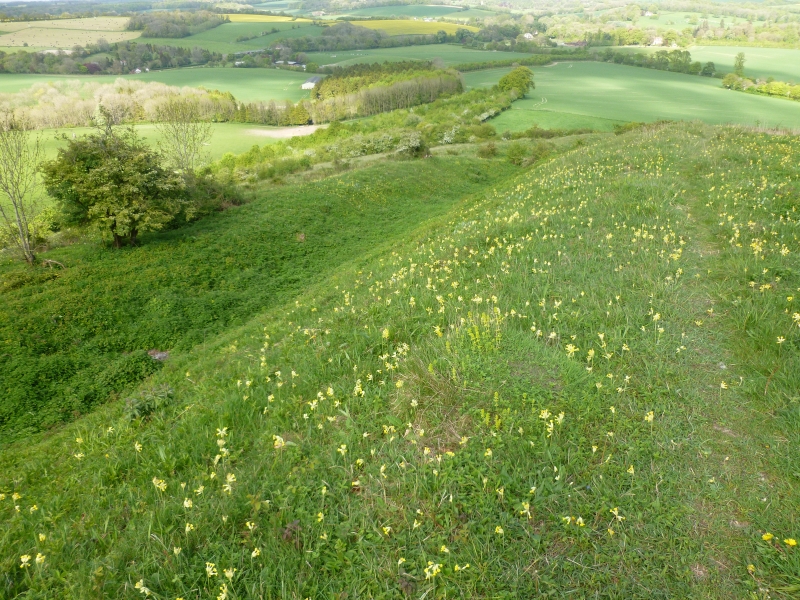 The monument includes a round barrow cemetery of Late Neolithic or Bronze Age date and a series of deep,parallel hollow ways of probable early medieval date,situated on the summit and sides of a prominent spur projecting east from Beacon Hill towards the Meon Valley.It holds commanding views overlooking Butser Hill,Old Winchester Hill and the village of Exton to the south east,and Southampton Water and the Isle of Wight to the south west.The round barrow cemetery is situated where the spur widens at the end of a narrow neck connecting it to Beacon Hill.It includes six bowl barrows which cluster towards the western neck and along the southern crest of the spur,and a saucer barrow situated on the spur's steeply sloping eastern face.The bowl barrows are relatively low and inconspicuous.They comprise flat topped,circular mounds ranging in size from 6m to 10m in diameter and from 0.15m to 0.6m in height.The most prominent and best preserved bowl barrow also includes a 2m wide surrounding ditch flanked by a low outer bank,3m wide,although this barrow has a deeply hollowed centre indicative of later excavation.Shallow quarry ditches,from which material would have been obtained for the mounds'construction,may also survive as buried features around the other barrow mounds,although these have now become infilled.The saucer barrow forms a more conspicuous feature visible over a wide distance from the valley floor and downland to the east,including a prehistoric round barrow cemetery on Old Winchester Hill which it faces.It includes a low,saucer shaped mound,15m in diameter,surrounded by a 2.5m wide ditch and a 5m wide outer bank which are most pronounced on the eastern,downslope side.The round barrow cemetery is partly enclosed by later,medieval hollow ways which climb from the south east towards the western neck,diverging around both sides of the spur.On the southern flank of the spur they include a single,slightly hollowed terraceway,5m wide.Around the eastern toe and northern flanks they are more prominent,where they include two parallel hollow ways,up to 2m deep and 3m-5m wide at the base,separated by a 10m wide bank.The lower,northern hollow way is flanked further to the north by a second bank,also 10m wide and 2m high,which forms part of the boundary of the Late Saxon estate of East Seaxena Tun and the later medieval parish of Exton.This feature extends beyond the area of protection to the east and west as a much lower bank,0.3m high,and now forms the modern boundary between the parishes of Exton and Warnford.It is,itself,flanked to the north by a later terraceway,5m wide,which,at the toe of the spur turns south,cutting the boundary bank to run along the lower hollow way.At this point,the hollow ways are also interfered with by a number of apparently modern features including a trackway,a number of possible quarry pits,and a relatively sharp bank,0.5m-1.5m high,which curves around the eastern side of the monument.The hollow ways and boundary bank appear to be contemporary features and to have been used over a period of some duration.Both are first recorded in an Anglo Saxon charter dated AD 940 which describes the boundary as following along part of the route of the great ridgeway from Winchester to the east which bends south east over Beacon Hill,forming a relatively easy gradient for cart traffic down the Meon Valley's steep western escarpment and extending in a direct line further south east towards Old Winchester Hill.To the north
west,the boundary bank and a single hollow way extend past the neighbouring Saxon estate and early medieval village of Lomer,occupied from the 10th century until 1851.To the east,they diverge:the boundary descending down the steep eastern face of the spur into the coombe lying between Beacon Hill and the river;the hollow ways appearing to connect with an old trackway and fenceline,marked on the first edition Ordnance Survey map,which extends to Beacon Hill from the south east in the direction of Shawford,an old river crossing 750m north east of Exton.The later use of the monument may also be associated with a medieval beacon after which the hill is named,called Lomer Beacon on Saxton's Map of Hampshire of 1579.John Norden's map of Hampshire of 1595 shows two beacons as being located at the summit of Beacon Hill,approximately 250m to the west of the monument,where some irregular earthworks survive.The beacon,said to have been fired by a man from Wickham,was probably first constructed in the 14th century during the reign of Edward II,and continued to be marked on maps until the Ordnance Survey six inch to the mile map issued in 1858.The wire and post fences which cross the monument are excluded from the scheduling,although the ground beneath them is included.

MAP EXTRACT
The site of the monument is shown on the attached map extract.It includes a two metre boundary around the archaeological features,considered to be essential for the monument's support and preservation.

Round barrow cemeteries date to the Bronze Age(c.2000-700 BC).They comprise closely-spaced groups of up to thirty round barrows-rubble or earthen mounds covering single or multiple burials.Most cemeteries developed over a considerable period of time,often many centuries,and in some cases acted as a focus for burials as late as the early medieval period.They exhibit considerable diversity of burial rite,plan and form,frequently including several different types of round barrow,occasionally associated with earlier long barrows.Where large scale investigation has been undertaken around them,contemporary or later "flat" burials between the barrow mounds have often been revealed.Round barrow cemeteries occur across most of lowland Britain,with a marked concentration in Wessex.In some cases,they are clustered around other important contemporary monuments such as henges.Often occupying prominent locations,they are a major historic element in the modern landscape,whilst their diversity and their longevity as a monument type provide important information on the variety of beliefs and social organisation amongst early prehistoric communities.They are particularly representative of their period and a substantial proportion of surviving or partly-surviving examples are considered worthy of protection.

The prehistoric round barrow cemetery on Beacon Hill survives well and can be expected to retain archaeological remains and environmental evidence relating to the monument and the environment in which it was constructed.Its association with later hollow ways and banks demonstrates a change in use of the site by the time of the early medieval period to become a line of communication and land boundary between neighbouring villages and estates.The later use of the hill,towards the end of the medieval period,as a Spanish Armada beacon illustrates a further military significance to the strategic panorama that the site commands over Southampton Water and the Isle of Wight.In view of the survival of many contemporary Saxon and later medieval earthworks and structures surrounding Beacon Hill,the preservation of the monument is considered to be of particular importance in contributing to the complete picture of settlement in the wider Meon Valley landscape during these periods.