A Scheduled Monument in Royston, Hertfordshire 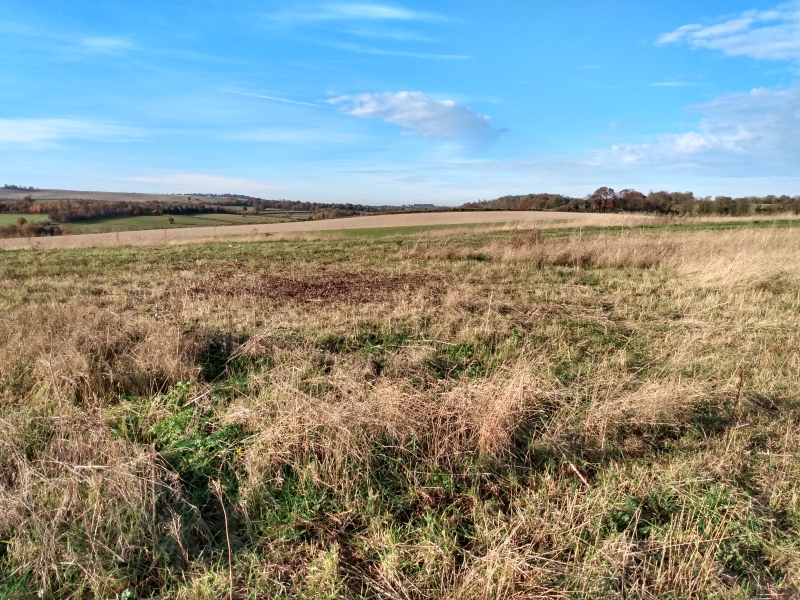 The monument includes the buried remains of a Bronze Age Springfield style
enclosure and five adjacent barrows located on Whiteley Hill, a pronounced
knoll on the eastern end of the Chiltern escarpment, some 1.5km to the south
east of Royston. The knoll provides extensive views to the south across a
broad bowl-like vale formed by a ridge of higher ground between Therfield and
Barley. Also visible, through a gap in the hills to the north, is part of the
route of the prehistoric trackway known as the Icknield Way, extending into
the lower ground south of Cambridge.

The monument, which is in two separate areas of protection, lies within land
subject to prolonged ploughing which has left few indications of the enclosure
or barrows at ground level. However, these buried features are clearly visible
as cropmarks and soilmarks which have been recorded by aerial photography on
numerous occasions since the 1950s, and most notably during the dry summer of
1976.

The larger part of the monument includes the enclosure, and four barrows on
the eastern side of the Royston to Barkway road which bisects the enclosure
on a north west to south east axis. The enclosure occupies the summit and part
of the southern slope of the knoll, and is defined by two concentric
subcircular ditches with maximum diameters of approximately 140m and 75m. The
outermost circuit contains an area of approximately 1.4ha. Both inner and
outer circuits are broken by narrow entrance causeways at corresponding
positions to the north.

Limited excavation in 1957 revealed that the outer ditch measured 2.8m in
width and 1.8m deep and provided some evidence for the former existence of an
internal bank. A trench across the inner ditch showed that this measured 3.4m
wide and 2.8m deep, and was perhaps flanked by an external bank. The enclosure
has been identified as a defended domestic enclosure constructed in the Late
Bronze Age.

The eastern arc of the outer enclosure is flanked by the remains of three
Bronze Age bowl barrows. The barrows can be identified on aerial photographs
by the ditches which formerly surrounded the burial mounds. These were also
partly investigated in 1957. The northern bowl barrow occupies a natural chalk
outcrop some 12m to the east of the present road and 14m from the outer
enclosure, the ditch measuring approximately 32m in diameter and about 0.45m
in depth. The second barrow ditch lies less than 8m to the east of the
enclosure, measuring about 18m in diameter and 0.9m deep, and the third lies
adjacent to the present road some 24m to the south of the outer enclosure
ditch. This latter barrow ditch measures some 28m in diameter, 0.9m deep and
6m wide, nearly twice the width of the other two. The fourth barrow on this
side of the present road lies between the northern and eastern bowl barrows
and approximately 20m from the outer enclosure ditch. This is visible on
aerial photographs as a dark circle, about 13m in diameter, which is thought
to represent the central depression of a pond barrow. The encircling bank,
which also typifies this class of monument, has, like the bowl barrow mounds,
been reduced by ploughing. A similar infilled depression represents a fifth
barrow on the western side of the road, some 70m to the north west of the
enclosure, and is in a separate area of protection.

Worked flints were found during archaeological excavation within the ditch of
the eastern bowl barrow and more widely distributed within the plough soil
covering the knoll. A comparable spread of Romano-British pottery fragments
has indicated later occupation on the site, and further fragments have been
found in the upper fills of both the enclosure and barrow ditches. A cobbled
hearth found overlying the infilled ditch of the northern barrow may also date
from this period.

The modern surface of the Royston to Barkway road is excluded from the
scheduling, although the ground beneath it is included.

Springfield style enclosures are roughly circular enclosures, typically found
on a hilltop or spur and dating to the Middle/Late Bronze Age, with some
occupied into the Early Iron Age. They are named after the type site at
Springfield, Essex, one of the few examples in the country which has been
fully excavated. They are characterised by either single or double enclosure
ditches with simple internal or external banks or box ramparts. Within the
enclosure, one or more circular buildings may be found with numerous pits and
postholes. Their function appears to be domestic and such sites will yield
archaeological and environmental information about the lifestyle of the
communities living in them. They are found in eastern England, usually
surviving as cropmark sites visible through aerial photography, and are
thought to number no more than fifty in total. All surviving examples are
considered to be of national importance and will merit protection.

Despite the damage caused by prolonged ploughing, the Springfield style
enclosure on Whiteley Hill survives well and will retain valuable
information. Part excavation has shown that the enclosure ditches remain well
preserved and demonstrated the survival of buried features in the interior. In
both instances, these features were found to contain artefactual evidence
related to the period of occupation. Environmental evidence will also be
preserved, and may illustrate both the appearance and ultilisation of the
landscape in which the enclosure was set. In addition to domestic use, some
Springfield style enclosures are considered to have served as centres for the
production and exchange of Bronze Age metalwork and to have performed ritual
functions. In this latter respect, the proximity of the adjacent barrows is
highly significant.

Bowl barrows, the most numerous form of round barrow, are funerary monuments
dating from the Late Neolithic period to the Late Bronze Age, with most
examples belonging to the period 2400-1500 BC. They were constructed as
earthen or rubble mounds, sometimes ditched, which covered single or multiple
burials and often acted as a focus for further burials in later periods. Pond
barrows are a broadly contemporary (but far more rare) form of funerary
monument. They are found either in isolation or, more frequently, within round
barrow cemeteries. They were constructed as regular circular depressions
surrounded by an embanked rim, and excavated examples have been shown to
contain single or multiple pits (or cists) containing human remains beneath
the central depression.

Both forms of barrow are highly representative of their period and provide
valuable evidence for the nature and variety of beliefs amongst prehistoric
communities. A substantial proportion of surviving bowl barrows, and all
examples of pond barrows, are considered worthy of protection.

Although the barrows on Whiteley Hill have been degraded by ploughing, the
part excavation of the bowl barrow ditches has demonstrated the preservation
of buried remains, and the other deeper features both beneath the former
mounds and (particularly) within the pond barrow depressions may also be
expected to survive. These will contain further artefacts (including funerary
remains) and sealed environmental evidence illustrating the appearance of the
landscape in which the barrows were set.

The barrows are considered to be broadly contemporary with the use of the
enclosure and, in addition to providing valuable information in their own
right, their presence may also provide insights regarding the character of
this adjacent site. The area between the barrows and the enclosure is of
particular importance in this respect, and in the light of evidence for later
Romano-British occupation on the site.