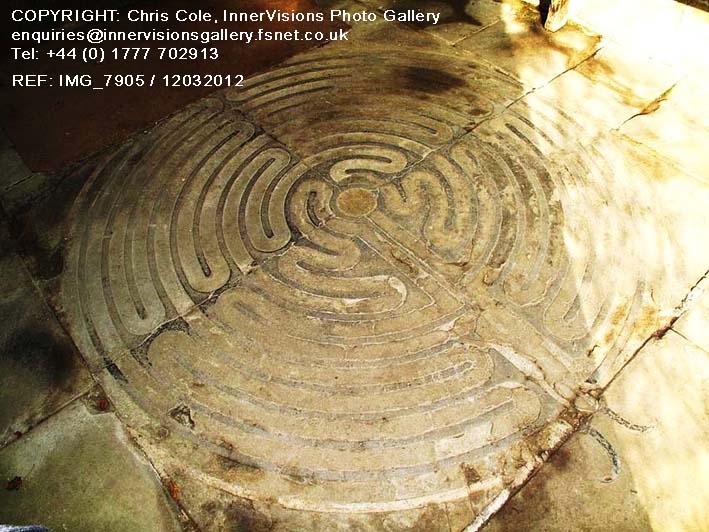 The monument includes a circular maze cut into the turf on the edge of the
scarp above the River Trent floodplain.
The earliest known documentary reference to the maze at Alkborough is in the
Diary of Abraham de la Pryme written between 1671 and 1704. However, the maze
is thought to be at least medieval in origin, and it is believed to have been
cut as a monastic penitence maze. The church and land at Alkborough was
granted to Spalding Priory sometime before 1146 when the Bishop of Lincoln
settled a dispute between the priory and Peterborough Abbey which also held
land in Alkborough and Walcott. Alkborough church is recorded as a dependancy
of Spalding Priory with a prior, three monks and a secular chaplain until at
least 1220 and at the Dissolution of the Monasteries in 1534, Spalding still
held a grange and a rectory at Alkborough. The copy of the maze design in the
floor of the porch to Alkborough Church and in one of the stained glass
windows date to 1887. These were installed by Goulton Constable, an
antiquarian and owner of Walcott Hall, as a means of preserving the design in
case the turf maze ever became overgrown and lost.
The maze is circular, and of traditional medieval Christian design, similar to
the pavement maze in Chartres Cathedral, France. It has a single convoluted
path which threads its way through 11 concentric rings to reach the centre.
The whole maze is just over 12m in diameter and formed by cutting away the
turf either side of the path. Maintenance of the maze over the centuries has
now left the surface of the maze up to 0.5m below the surrounding ground
surface.

Mazes have a long lived history and have a variety of form and purpose, most
commonly as garden features. They are thought by some to derive from
prehistoric cup and ring marked stones and other megalithic sculpture
with spiral designs, several examples of which are found in the British Isles.
The earliest recognized maze design is the seven ring classical or Cretan
labyrinth, single pathed and found as designs carved on stone, cut into turf
or marked by boulders. Mazes also exist as designs on Roman produced mosaic
pavements; and six are known to be in Britain. The medieval Church adopted a
new design of maze, the earliest known full sized example being the pavement
maze in Chartres Cathedral laid out in 1235. These medieval Christian mazes
are circular or octagonal, with a single path following 11 concentric rings
and forming an overall cruciform design, probably meant to be used as a
penance, completed on the knees to gain forgiveness for sins. More secular
uses of mazes continued until at least the 18th century, although between 1649
and 1659 maze games were one of the activities either discouraged or outlawed
by the Puritan dominated Republic. The first more complicated puzzle mazes
developed from the 15th century as features of ornamental gardens, with paths
separated by hedges or flower borders, the most famous being the Hampton Court
maze which was laid out in 1689-96. In the 19th century there was a revival of
interest in mazes of all designs which continued into the 20th century. It is
thought that there were over 100 medieval turf cut mazes in England of which
the approximate locations of 60 are known. Of these, less than eight are
believed to survive in their original locations. A number of other maze types
are also known, including small finger mazes carved on natural rock walls in
Cornwall, and at least one boulder maze on the Isles of Scilly.
Mazes are a rare monument type, providing an unusual insight into early
social, recreational, religious and ritual activity. All examples still in
their original position and with a documented antiquity are likely to be
nationally important.

Julian's Bower is a well preserved example of a turf maze, its sunken form
demonstrating its great age. It has been suggested that the maze was cut by
Spalding Priory before 1220, and thus predates the pavement maze in Chartres
Cathedral. It is one of the few surviving turf mazes believed to be medieval
in origin.