A Scheduled Monument in Manaton, Devon 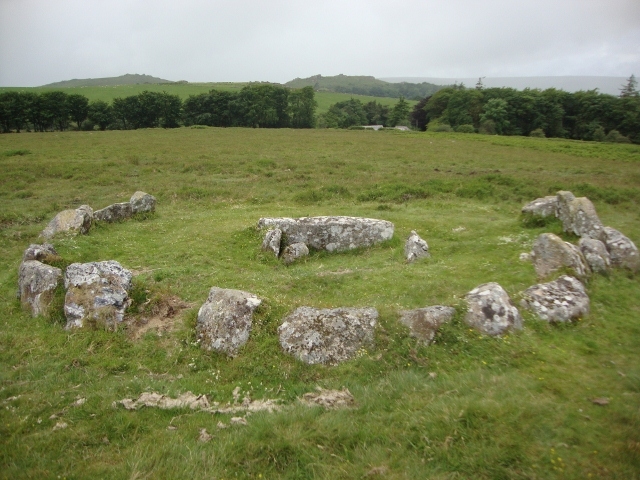 The monument includes a ring cairn situated on a ridge overlooking the valley
of the East Webburn River. The cairn survives as a 6.5m diameter and 0.15m
high mound defined, except on the west, by a ring of at least 19 close set
granite stones. In the centre of the cairn is a north to south orientated
cist, with both end stones and the western side stone remaining visible.

Dartmoor is the largest expanse of open moorland in southern Britain and,
because of exceptional conditions of preservation, it is also one of the most
complete examples of an upland relict landscape in the whole country. The
great wealth and diversity of archaeological remains provide direct evidence
for human exploitation of the Moor from the early prehistoric period onwards.
The well-preserved and often visible relationship between settlement sites,
major land boundaries, trackways, ceremonial and funerary monuments as well as
later industrial remains, gives significant insights into successive changes
in the pattern of land use through time. A ring cairn is a prehistoric ritual
monument comprising a circular bank of stones up to 20m in diameter
surrounding a hollow central area. The bank may be kerbed on the inside, and
sometimes on the outside as well, with small uprights or laid boulders. Ring
cairns are found mainly in upland areas of England and are mostly discovered
and authenticated by ground level fieldwork and survey, although a few are
large enough to be visible on aerial photographs. They often occur in pairs or
small groups of up to four examples. Occasionally they lie within round barrow
cemeteries. Ring cairns are interpreted as ritual monuments of Early and
Middle Bronze Age date. The exact nature of the rituals concerned is not fully
understood, but excavation has revealed pits, some containing burials and
others containing charcoal and pottery, taken to indicate feasting activities
associated with the burial rituals. Many areas of upland have not yet been
surveyed in detail and the number of ring cairns in England is not accurately
known. However, available evidence indicates a population of between 250 and
500 examples. As a relatively rare class of monument exhibiting considerable
variation in form, all positively identified examples retaining significant
archaeological deposits are considered worthy of preservation.

Despite part robbing, the ring cairn 215m east of East Lodge survives
comparatively well and contains archaeological information relating to the
monument and the environment in which it was constructed. Its position on a
ridge suggests that it is likely to have also served as a territorial marker.