A Scheduled Monument in Brilley, Herefordshire, 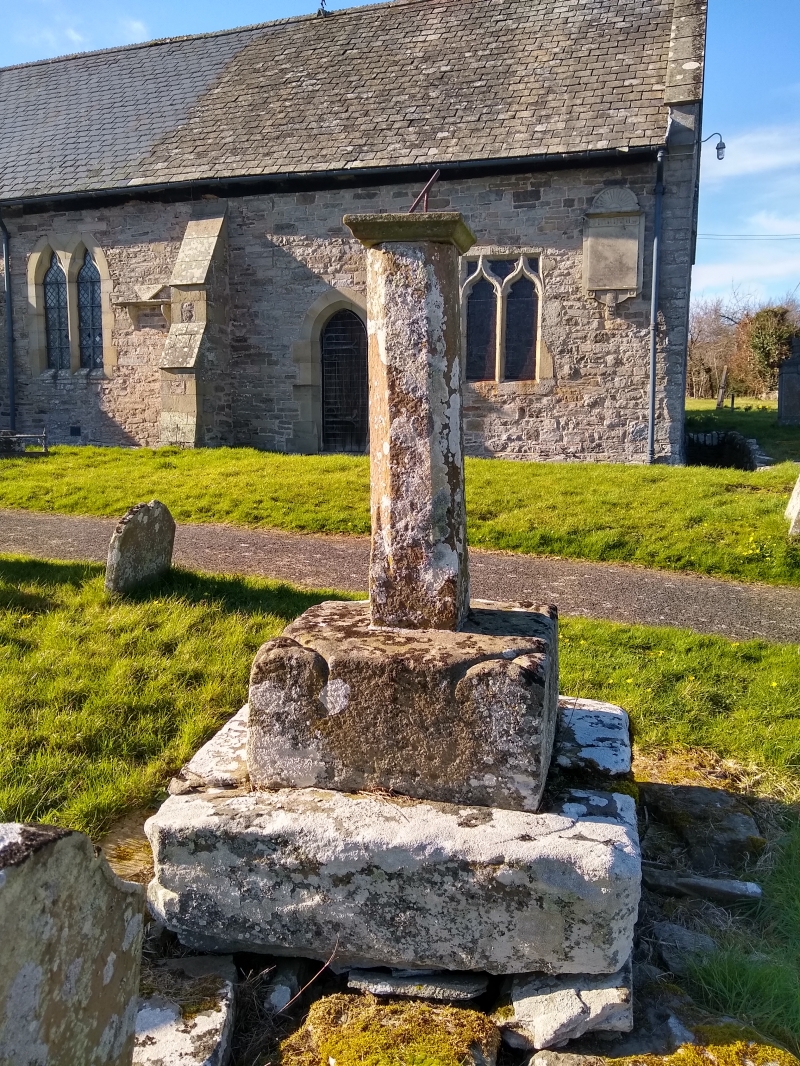 The monument includes the remains of a standing stone cross located
approximately 8m to the south of the chancel and 16m to the south east of the
south porch of St Mary's Church. The cross is of stepped form, and is medieval
in date. It includes the base of two steps and a socket stone, the remaining
part of the shaft, and a later stone capital and a sundial. The cross is
Listed Grade II.

The steps are square in plan and are constructed of grey sandstone blocks,
similar to those utilised in the construction of the church. The bottom step
measures 1.88m square and lies flush with the ground level. The top step
measures 1.12m square and 0.28m high. Both steps are unmortared, and the
rubble foundation is visible through a large gap between the two steps. The
rectangular socket stone rests on the top step. It measures 0.78m east-west by
0.64m north-south and 0.3m high. The socket stone has decorative chamfers in
low relief on the upper four corners, and an octagon scored onto the upper
surface. The shaft is mortised into the socket stone and bonded with lead. It
is 0.23m square at the base and rises through chamfered corners to a tapering
octagonal section and a height of 0.94m. Positioned on top of the shaft is a
moulded square capital with an 18th century, circular, bronze sundial set into
it. The capital measures 0.28m square and 0.1m deep and the sundial has a
diameter of 0.23m. The overall height of the cross is 1.62m.

The gravemarker immediately to the south of the cross is excluded from the
scheduling, although the ground beneath it is included.

The remains of the churchyard cross at St Mary's represent a good example of a
medieval standing cross with a square stepped base, a rectangular to octagonal
socket stone and shaft. It occupies a prominent position to the south east of
the south porch and is believed to stand in or near its original position. The
cross has not been significantly altered and the addition of the sundial
demonstrates the continued function of the cross as a public monument and
amenity.