Coldberry lead mine and associated hushes 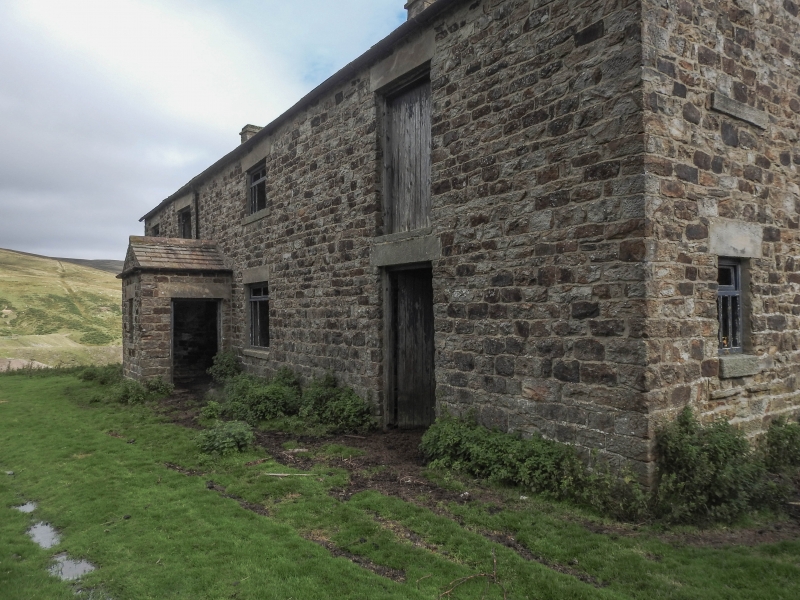 The monument includes the ruins, earthworks and other remains of the Coldberry
lead mine and Red Grooves Hushes and ore works. The monument lies between the
Hudeshope and Bow Lee becks, 3km NNW of the village of Middleton in Teesdale.
The early history of the lead workings at Coldberry is uncertain though more
than two million tons of material had been removed from the hush prior to the
mid-18th century. The mines were later worked by an extensive network of
levels and dressing floors were built on artificial terraces in the 19th
century. The mine declined thereafter though an oreshoot was worked between
the late 1930s and 1953.
The Coldberry Gutter hush, situated on the watershed between the Hudeshope and
Bow Lee becks and running through Hardberry Hill, measures 1.7m long and is up
to 50m wide by 30m deep. At the east end of the hush stand the remains of the
largely mid-19th century Coldberry Mine built by the London Lead Company. The
mine includes a two-storey mine lodging shop measuring 22m by 10m, a table and
smithy block measuring 8m by 14m, a 2m high level arch and retaining wall and
a roofed powder store, approximately 5m square, situated to the north west of
the main complex. All are Grade II Listed Buildings. All three buildings are
roughly coursed and appear to be of contemporary build. A number of 20th
century buildings, of red brick and concrete construction, are visible to the
east and retain a number of machine settings.
The dressing floors situated to the south east have been landscaped following
the removal of the waste tips for reprocessing, though extensive deposits
relating to the 19th century are considered to survive below ground surface.
The remains of a 5m diameter round buddle is exposed on the lower floors,
together with in situ timber lining, a range of timber settling tanks and
areas of flooring of edge laid fire bricks, suggesting that other buried
features will survive in adjacent areas. In addition, the scheduling includes
the remains of a water balance incline, which is one of only two known
examples in the North Pennines. This consists of a concrete engine bed,
measuring 3.8m by 6m by 1m high, and a walled incline, measuring 2.5m wide
with walls 2.5m high on either side.
The scheduling also includes the Slate Sill level situated to the west of
Coldberry Mine ore works. The level has an intact corbelled arch portal,
measuring 1.3m wide by 1.5m high, and adjacent remains of a two-roomed
mineshop, measuring 6m by 12m by 2.5m high.
At the west end of Coldberry Gutter lie the remains of the Red Grooves mines.
These include a number of levels with corbelled arch portals, generally 1.1m
wide by 1.3m high, and at least one extant stone-lined shaft measuring 1.2m in
diameter. The remains also include a bank of bouseteams (storage bays for
unprocessed ore) measuring 40m long by 3m wide by up to 2m high, including at
least 10 individual bays. In addition, a small terraced dressing floor with
deposits of buddling waste, a rectangular building with walls 1.5m high, and
bounded by a revetment wall, lie at the west end of the site.
The scheduling also includes the remains of an extensive water management
system consisting of a network of leats and dams. The largest of the dams is
situated on the watershed between the Bow Lee and Hudeshope becks, above and
to the north of Coldberry Gutter. The dam encloses three sides of an
approximately rectangular area of standing water. It takes the form of an
earthen bank, with an internal edge-laid stone revetment; the external south
side is also revetted. The bank averages 1.5m high and is 6m wide on the west
side, 10m wide on the south side and 12m wide on the east side. Immediately to
the south and running parallel to the south side is an additional lower dam.
The dam, which is orientated east to west, consists of an earthen bank 10m
wide by 2m high by approximately 80m long. Water from the upper dam appears to
have fed into the lower dam through a sluice at the centre of the south bank
as well as being diverted around the west end of the lower dam by a leat.
Numerous earthworks and denuded sections of leat in this area suggest a
complex water management system which was modified over time. Further remains
of an additional system lie at the east end of the site and were built to
serve the 19th century Coldberry Mine dressing floors. They include at least
three well preserved dams fed by a well built, stone-lined leat which collects
water from a point at least 1.25km to the north. The dams and the best
preserved section of leat are included within the scheduling.
All drystone boundary walls, fenceposts and road surfaces are excluded from
the scheduling, although the ground benath these features is included.

Approximately 10,000 lead industry sites are estimated to survive in England,
spanning nearly three millennia of mining history from the later Bronze Age
(c.1000 BC) until the present day, though before the Roman period it is likely
to have been on a small scale. Two hundred and fifty one lead industry sites,
representing approximately 2.5% of the estimated national archaeological
resource for the industry, have been identified as being of national
importance. This selection of nationally important monuments, compiled and
assessed through a comprehensive survey of the lead industry, is designed to
represent the industry's chronological depth, technological breadth and
regional diversity.
A hush is a gully or ravine excavated at least in part by use of a controlled
torrent of water, to reveal or exploit a vein of lead or other mineral ore.
Dams and leats to supply the water are normally associated, and some examples
show tips of waste from manual ore processing beside the hush itself. Shaft
and adit mineworkings sometimes occur in spatial association, though their
working will not have been contemporary with that of the hush. There is
documentary evidence for hushing from the Roman period on the continent, and
from the 16th century in England; however a high proportion of surviving
hushes are believed to be of 17th to 18th century date, the technique dying
out by the mid 19th century.
Hushes are a dramatic and very visible component of the lead mining industry.
They are common in the Pennines from Yorkshire northwards, and in parts of
Wales, but are rare in other lead mining areas. A sample of the better
preserved isolated examples and those which form part of more extensive lead
mining complexes, will merit protection.

The Coldberry Gutter is considered to be the largest and most spectacular hush
in the North Pennines. It is a dominant landscape feature that is visible for
many miles and is unusual in that it cuts through the watershed between
neighbouring valleys. The remains of the largely 19th century Coldberry Mine
retain a number of rare and well preserved features such as the water balance
incline and round buddle. The survival of in situ timberwork on the lower
floors indicates that further well preserved archaeological deposits will
survive in this area. The monument is located within a more extensive and
diverse mining landscape and forms a well preserved core area. The renovation
of the mineshop by the North Pennine Heritage Trust will add to the public
amenity and educational value of the monument.

Books and journals
Attwood, B, 'Newsletter Edition 26' in A Walk around Coldberry mineshop and nearby lead mining remains, , Vol. Autumn, (1995)
Robinson, C, 'Newsletter No.7' in Mining in the Hudeshope Valley, , Vol. February, (1987), 5