A Scheduled Monument in St. Mary's, Isles of Scilly 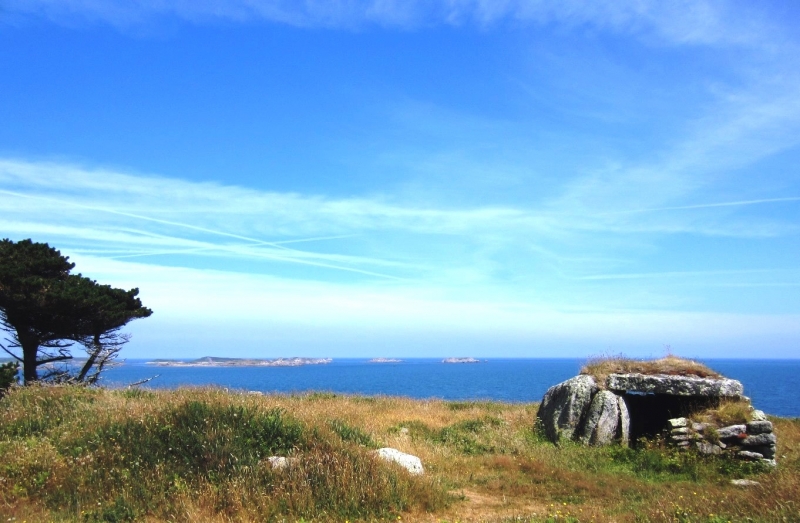 The monument includes a large 17th century battery containing an 18th century
stone-built watch house, situated on top of Mount Todden, a prominent rounded
spur on the east coast of St Mary's in the Isles of Scilly. The battery also
includes the foundation of a World War II generator-housing within its
south east sector.
The battery is visible as a subtriangular enclosure, up to 28m across
internally, behind the crest of the spur's steep north east coastal slope. The
enclosure is defined by an earth and rubble bank, generally 5m wide, 0.3m to
0.8m high internally and 1m to 2m high externally, with rounded corners facing
south west, NNW and ESE. It has a 7.5m wide entrance gap on the west with an
inturned terminal to the bank on the north. Both northern and southern
entrance terminals are revetted by edge-set slabs with wedge marks along their
edges, a splitting-method used prior to AD 1800. The battery interior is
levelled, merging with the external ground level on the west but raised to
1.7m above it on the north east. A surface hollow behind the battery's ESE
corner continues 1.3m into the inner face of the bank as a recess 3.5m wide,
considered to be the site of a former gun platform whose demolition has left a
scatter of granite blocks behind the recess, some with dressed faces.
The watch house, roughly central within of the enclosure, survives as a
rectangular building 3.5m north east-south west by 2m north west-south east
and 1.8m high internally, with an entrance on the south west. Its north west
wall is formed by a single massive 1.6m wide edge-set boulder projecting
slightly beyond the building's north east end. The other walls are generally
1m thick and faced on each side by neat granite rubble, laid to course and
mortared using the local subsoil, called ram. The south east wall has an upper
course of larger slabs which project slightly into the interior to support a
roof of six slender wedge-split slabs laid side-by-side. The north east wall
rises 1.6m high, leaving a 0.3m high lookout gap below the roof. The south
west wall, just beyond the roofed area, rises 1.2m high with an entrance gap
0.85m wide to the north west boulder wall; a vertical slot in the boulder's
face indicates the entrance was formerly closed by a door. The upper surface
of the roof and walls have a shallow-domed turf-covered rubble capping.
Other features occur on the boulder forming the north west wall of the watch
house. These include a vertical groove in the outer face of the projecting
north east end, considered to have held a flagpole whose stays were secured by
ring-headed iron pegs, one of which survives forward of the groove, lead
plugged through the slab, with broken stumps of three more behind the groove.
Within the watch house, the inner face of the boulder has a small rock-cut
candle-holder, visible as a narrow ledge with a slight central pit below a
vertical groove. Nearby, incised graffiti on the boulder's inner face includes
the markings `WW 1809' and a group containing a Union Flag on a pole, a Royal
Ordnance arrow, the date `1914' and the initials `JP'.
Close to the south east of the watch house is the flat rectangular concrete
raft of a small military generator building used during the World War II,
since demolished; the raft has a small raised plinth in its south east half.
Concrete rubble from the demolished walls is spread on the battery's south
east bank.
The battery and watch house occupy one of the most elevated situations on the
east coast of St Mary's, with an uninterrupted field of view across the
maritime approaches to the Isles of Scilly, extending across to the mainland
in clear conditions. Their position complemented the extensively surviving
system of Civil War and later defences on Scilly by giving advanced warning of
approaching danger and allowing preparation of the main system of defences
which were necessarily sited at lower levels to permit effective and accurate
gun fire with the technology available at the time. Nearby Civil War batteries
include examples on the lower northern slope of Mount Todden and on Toll's
Island, 70m and 440m to the NNE respectively. In 1792 the Admiralty surveyor
Spence described the battery and lookout as an `old watch house', but in 1796,
the Rev John Troutbeck recorded that the battery still retained one cannon,
that the watch house was bomb-proof, and that in time of war three islanders
and one soldier kept watch there every night.

The Isles of Scilly, the westernmost of the granite masses of south west
England, contain a remarkable abundance and variety of archaeological remains
from over 4000 years of human activity. The remote physical setting of the
islands, over 40km beyond the mainland in the approaches to the English
Channel, has lent a distinctive character to those remains, producing many
unusual features important for our broader understanding of the social
development of early communities.
Throughout the human occupation there has been a gradual submergence of the
islands' land area, providing a stimulus to change in the environment and its
exploitation. This process has produced evidence for responses to such change
against an independent time-scale, promoting integrated studies of
archaeological, environmental and linguistic aspects of the islands'
settlement.
The islands' archaeological remains demonstrate clearly the gradually
expanding size and range of contacts of their communities. By the post-
medieval period (from AD 1540), the islands occupied a nationally strategic
location, resulting in an important concentration of defensive works
reflecting the development of fortification methods and technology from the
mid 16th to the 20th centuries. An important and unusual range of post-
medieval monuments also reflects the islands' position as a formidable hazard
for the nation's shipping in the western approaches.
The exceptional preservation of the archaeological remains on the islands has
long been recognised, producing an unusually full and detailed body of
documentation, including several recent surveys.
Civil War fieldworks are earthworks which were raised during military
operations between 1642 and 1651 to provide temporary protection for infantry
or to act as gun emplacements. The earthworks, which may have been reinforced
with revetting or palisades, consist of earth and rubble platforms or banks
and ditches.
The Civil War fieldworks of the Isles of Scilly form a major part of the 150
surviving examples of fieldworks recorded nationally. They present an
unusually complete system of fortifications from this period, both in the
surviving range of fieldwork types represented and in the surviving pattern of
their strategic disposition.
Three main types of Civil War fieldwork have been recognised on the Isles of
Scilly: breastworks, batteries and platforms; these could be deployed
separately or in combination to form a defensive complex.
Breastworks, which on the Isles of Scilly run beside the coastal cliff edge,
consist of an earth and rubble bank, up to 4m wide and nearly 2m high but
generally much smaller, usually accompanied by a ditch on the landward side.
Sixteen surviving examples are recorded on the islands.
Batteries are levelled areas or platforms, generally up to 20m across,
situated on a hilltop or terraced into a slope to serve as gun emplacements.
They vary considerably in size and shape and are usually partially or wholly
enclosed by a bank, occasionally incorporating one or two outer ditches.
Twenty batteries survive on the Isles of Scilly, several connected by
breastworks. Adjacent to some batteries are examples of the third fieldwork
type, platforms. These are partly terraced into, and partly out from, sloping
ground and represent sites of lookouts and temporary buildings. Eight such
platforms, measuring up to 12m by 8m in size, are known to survive on the
islands. These fieldworks and fieldwork complexes were occasionally associated
with other classes of defensive monument on the islands, including earthen
artillery forts and blockhouses.
The fieldworks were designed to defend the deep water approaches to the
islands, especially St Mary's where most examples are found. Fieldworks are
also known from Tresco, Bryher, Samson, St Agnes and Gugh. The circumstances
of their construction are recorded in contemporary historical documents which
indicate most were built by the Royalist forces which controlled the islands
for the entire Civil War period except during 1646-8.

The Civil War battery and 18th century watch house on Mount Todden survive
well, forming an integral part of the 17th-18th century defensive systems
whose overall survival on Scilly is unusually extensive. The aspect and
elevated situation of the battery and watch-house gave them an unusual and key
role in the application of those defences, demonstrating clearly the
organisational and strategic methods employed by the military forces of that
period. The continued strategic importance of this location in the evolving
defences is also evidenced by its repeated military occupation from the 17th
to mid-20th centuries.