A Scheduled Monument in Kinver, Staffordshire 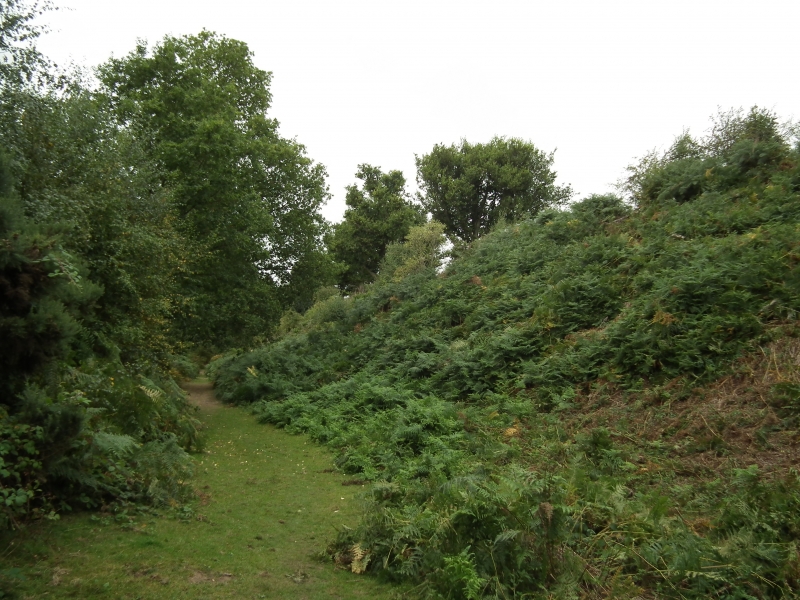 The monument is situated at the northern western corner and highest point of
the Kinver escarpment, on the south western outskirts of the village of
Kinver. It includes the earthwork and buried remains of a univallate Iron Age
hillfort.
Kinver camp is sub-rectangular in plan with external dimensions of
approximately 210m north west-south east and up to 300m north east-south west.
The defensive earthworks include a single bank and an external ditch along two
of its four sides, whilst the naturally steep gradient of the escarpment is
thought to have made the construction of a ditch along the hillfort's north
western and north eastern sides unnecessary. The bank and ditch, therefore,
define the south western and south eastern sides of the hillfort and terminate
at, or close to, the edge of the escarpment at both ends. The ditch is
approximately 24m wide and partly silted. Its north eastern and north western
terminals have later been modified by small-scale quarrying and there is no
surface evidence for the ditch at these points. The internal bank runs
parallel to the ditch and still stands to a height of 8m-9m above the base of
the ditch and 2m-3m above the hillfort interior. Towards the north western end
of the south western rampart is a small brick-built structure which has been
terraced into the outside of the bank. It is a former World War II shelter for
the Home Guard and is included in the scheduling in order to secure the
evidence for more recent defensive uses of the site. Parallel with, and some
3m from the internal face of the bank, are the remains of a low, linear
earthwork up to 0.8m high, whilst approximately 5m beyond the external ditch,
is a further low bank which also runs parallel with the defensive earthworks.
These features, although giving the impression of an interior berm and an
external counterscarp bank, are believed to be headlands resulting from 19th
century ploughing around and within the hillfort following its incorporation
into a rectilinear field system.
Surface evidence for defences along the north western and north eastern sides
of the hillfort is much less clearly visible although there is a low bank
running along the former and a slight earthwork at the north eastern corner.
The low bank is 0.7m high and can be traced intermittently for approximately
170m parallel to the edge of the scarp. It is believed to represent part of
the defences along the north western side of the hillfort and is now
surmounted by a discontinuous thorn hedge which has survived from its later
use as a field boundary (which is marked on early Ordnance Survey maps). The
slight earthwork at the north eastern corner of the site may represent an
original defensive feature and is included in the scheduling.
The original access into the interior is thought to have been at the north
eastern end of the south eastern defences. Although the quarrying and later
access arrangements in this area have resulted in a section of the ditch
becoming infilled, there is no evidence of the ditch re-emerging within the
natural scarp edge immediately to the north east, indicating that there is an
original terminus to the ditch beneath the modern path and suggesting an
entrance which has been partly lost through erosion and partly buried.
The hillfort's earthworks enclose an area of approximately 3.75ha, the ground
surface of which slopes considerably towards the south east and south. No
internal earthworks associated with the occupation of the hillfort are visible
within the interior, but the build-up of the ground surface, particularly
alongside the south eastern rampart, will preserve stratified occupation
deposits.
The toposcope in the northern part of the interior, the steps built into the
north western and south western sides of the monument and the concrete
retaining wall at the northern corner of the hillfort are excluded from the
scheduling but the ground beneath these features is included.

Kinver camp survives well and is a good example of this type of hillfort.
Within the interior of the site, buried structural and artefactual evidence
associated with the development and occupation of the hillfort will survive in
good condition. Immediately behind the south eastern and south western
ramparts in particular, there is likely to be a well stratified sequence of
deposits which, together with the environmental evidence retained within the
defensive ditch, will provide information on the economy of the site's
inhabitants and the landscape in which they lived.
Kinver Camp is accessible to the public and serves as a valuable educational
and recreational resource.