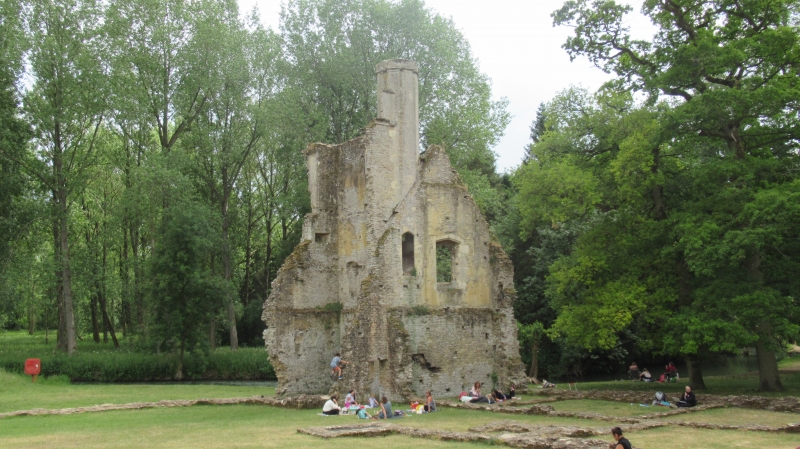 The monument includes the remains of Minster Lovell Hall, its associated
buildings, two fishponds and part of what is probably an early medieval
cemetery. The site lies immediately south and west of St Kenelm's Church on
the north bank of the River Windrush. The upstanding ruins of the hall are
Listed Grade I.
The Hall comprises the ruined remains of a manor house built in the first
half of the 15th century. An earlier house built on the site is believed
to have been completely demolished when Minster Lovell Hall was constructed.
The manor house was arranged around a quadrangle about 38m wide east-west and
open to the river on its southern side. To the north stood the great hall with
its entrance porch and the other principal rooms. The porch which is
approached from the north by a patterned cobbled pathway, has suffered the
effects of being exposed to the elements but internal plaster survives within
the vaulted roof. Decorative details can also be seen, giving an impresion of
the splendour of the building when newly constructed. The great hall measures
15m by 8m and stands 12m high from floor to wall top. The windows are known to
have originally included decorated glass showing heraldic designs relating to
the Lovell family. A small staircase led to a large upper room or solar and
there was also a chapel on the first floor. The west wing contained apartments
and chambers. The east wing was divided into two roughly equal parts by a
passage. North of this were the kitchens while the building to the south
served as the stables. East of the hall and north of the kitchen was a series
of rooms believed to have included the buttery, bakehouse and pantry. On the
south west corner stood a substantial tower and externally buttressed wall
which was added towards the end of the 15th century. Further minor extensions
and alterations to the layout and use of parts of the manor carried on over
the course of its history, notably a west facing extension and conversion of
the chapel to domestic use, sometime during the 16th century.
East of the hall buildings lies a series of earthworks representing ancillary
buildings and the earlier road line.
Two fishponds, forming part of a substantial group of ponds along this stretch
of the Windrush, lie immediately west and south of the hall. The eastern of
the two ponds was constructed using a former channel of the river which ran
immediately to the south of the manor house. This pond is roughly 50m from
east-west and is broader at its eastern (down stream) end. It remains open and
has been adapted since its original construction to form an ornamental
feature.
The pond to the west of the hall measures about 60m from east-west and is
broadest at its western end where it measures up to 25m wide. It has become
much overgrown with flora and was originally more rectangular in plan, having
become silted up over time. There is a further fishpond about 100m south east
of the hall which has been heavily dredged in the past and is not included in
the scheduling.
To the north of the great hall is St Kenelm's Church, dedicated to the
martyred son of King Kenwulf of Mercia, who is believed to have died in about
AD 819. The church, which is not included in the scheduling, is now surrounded
by a roughly square and relatively small graveyard. However, archaeological
work in late 1995 and early 1996 found evidence of burials on a strip of land
to the west of the present churchyard wall and this area is included in the
scheduling. Although undated, these burials can most probably be explained by
the earlier existence of a much larger close around the church which shrank
as the status of the church lessened as the parish became smaller.
It is known from documentary records that Minster Lovell Hall was built by a
William Lovell around AD 1440 although the land had been held by the Lovells'
since as early as AD 1130. The main additions were probably carried out by his
grandson Francis. There is much known about this important family whose
members were present on the Third Crusade (1193), and at the battles of
Bannockburn (1314) and Bosworth (1485) and others. The manor was sold in 1602
to the Coke family and they remained owners until 1812 although the manor
was dismantled in about 1747 after which they did not reside in Minster
Lovell. Several further owners followed until Mrs Agneta Terriere placed the
ruins in the care of the state in 1935.
All boundary walls, fences, the lifebelt holder posts, the surface and base of
the new access road, and all modern structures are excluded from the
scheduling, but the ground beneath these features is included.

Minster Lovell Hall is known from part excavations to contain
archaeological and environmental evidence relating to the construction,
function and development of the site. In addition, the historical activities
of the lords of Minster Lovell are well documented and connect the family to
many key historical events. The monument is open to the public as an historic
amenity.
Taken as a group, in association with the nearby fishponds, church, farm and
dovecote (the subject of a separate scheduling), the monument provides a good
example of the relationship of status, religion and economy in the medieval
period.