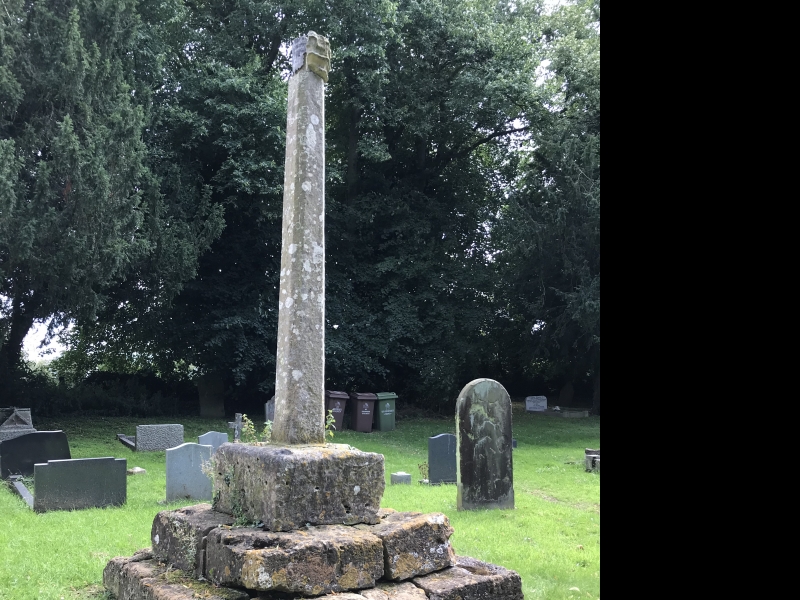 The monument includes a standing cross in the churchyard of St George's
Church, Bradley, standing approximately 6m south of the south porch of the
church.
The cross includes a tapered chamfered shaft approximately 2.25m high with
broach-stops of limestone ashlar, set into a base measuring 0.7m square and
0.4m high, set upon a three course stepped base, the lowest section of which
is 2m square and 10cm high, the central step being 1.7m square and 0.3m high
and the upper step being 1.25m square and also 0.3m high. The overall height
of the whole monument is some 3m.
The cross shaft retains part of an octagonal capital which has a damaged,
crenellated top. The cross is believed to date to the 14th or 15th century,
and it is Grade II Listed.
All paved surfaces and a headstone are excluded from the scheduling, although
the ground beneath them is included.

The cross is thought to be in its original position, and is considered to be a
good example of a 14th or 15th century cross which survives in good condition.

Other
Department of the Environment List, (1986)
Humberside SMR, Sites and Monuments Record Sheet, (1996)