A Scheduled Monument in Seaton Ross, East Riding of Yorkshire 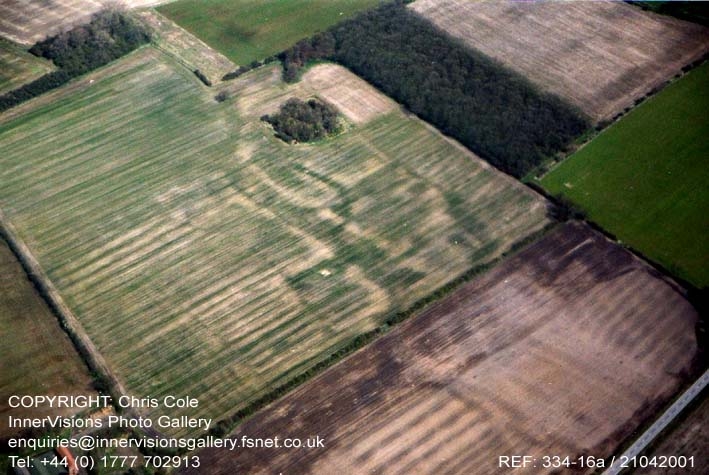 The monument, a moated site, is situated 450m north east of Manor Farm and
includes a small, quadrangular raised platform area with dimensions of 30m
north-south by 28m east-west, surrounded by moat ditches. The monument has
overall dimensions 50m north-south by 48m east-west. The platform area is
around a metre above the level of the exterior ground surface.
The `U' shaped moat ditches range from between 7m to 12m wide, across their
tops, and are about 1m to 2m deep. The moat ditches are intact on all sides,
but any trace of related exterior banks has been largely removed by close
ploughing to the edges of the ditches.
In the centre of the platform the buried remains of a timber structure
associated with the occupation of the moat are reported to exist.
The remains of an inlet channel located at the south eastern corner of the
site, have been largely infilled by modern ploughing, but the channel will
survive as a buried feature and is included in the scheduling.
The remains of earlier ridge and furrow cultivation surrounding the monument
on its eastern and southern sides show as crop marks of cultivation from the
air, but does not survive well enough to be included in the scheduling.
All post and wire fencing is excluded from the scheduling, although the
ground beneath is included.

The moated site north east of Manor Farm survives in good condition and as
the moat island is unencumbered by modern building, it will retain evidence of
the structure which originally occupied it. The surrounding moat survives
well and is undisturbed. It will thus retain environmental evidence relating
to the period of the monument's construction.
The monument is one of a number of moated sites in this part of East
Yorkshire, clustering along both the northern and southern sides of the River
Humber, which represent a typical form of settlement of low-lying and flood
plain land such as this in the medieval period.