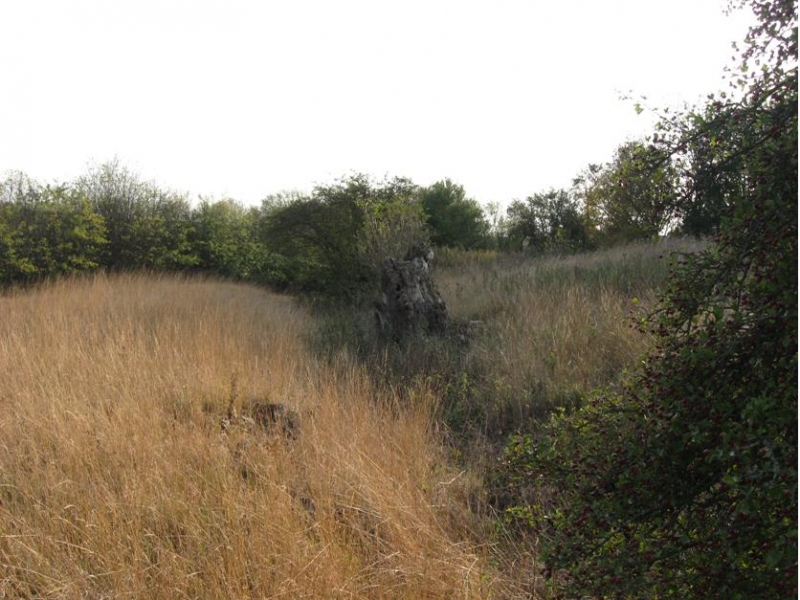 The monument includes a medieval motte and bailey castle with associated
cultivation earthworks and fishponds, located approximately 600m to the NNE of
St Andrew's Parish Church on the tip of a low promontory projecting northwards
from the southern margin of Woodwalton Fen.

The castle utilises a natural hillock near the end of the spur, and the
central motte is largely a remodelling of the summit, which stands about 8m
above the level of the fen. During the period of occupation, the stronghold
crowning the summit was surrounded by a circular ditch measuring about 10m
wide and 2m deep, and with a diameter of about 50m. Post-medieval quarrying
has hollowed out the summit of the mound, and only one section of the ditch
survives in full on the south eastern side. The outer ditch scarp remains
visible around the rest of the perimeter, but it is now uncertain whether the
feature which it encircled was a platform or a small artificial mound.
The motte was surrounded by a concentric ditch, which ran around the foot of
the hillock at an average distance of 50m from the ditch on the summit, and
served as the outer boundary of the castle's baileys or courtyards. This ditch
remains clearly visible around the northern and north eastern part of the
circuit, where it measures between 5m and 10m in width and averages 0.8m in
depth. The height of the inner scarp is generally greater than that of the
outer scarp reflecting the rising gradient of the hillock.

The western arc of the bailey ditch lies in arable land separated from the
main area of the castle by a farm road. Over the years this ditch has become
buried. It is no longer visible on the ground, although its position was
recorded by the Royal Commission in 1926. To the east of the motte, the bailey
ditch can be traced to the point where it meets the north eastern corner of
the gardens to the rear of the New Cottages. To the south of this point, the
course of the ditch is perpetuated by a curious angle in an otherwise straight
drainage ditch. This section has been enlarged in modern times and is not
included in the scheduling. The southern arc of the bailey ditch has also
become infilled, although the inner scarp can still be traced as a very slight
earthwork crossing the pasture to the north of Thatched Cottage and Corner
Cottage.

The outer bailey is subdivided by two main hollow ways which ascend the slope
towards the motte from the direction of Manor Farm to the north west and along
the northern boundary of the New Cottages' gardens to the south east. The area
of the bailey between these two features contains a number of minor earthworks
which include a rectangular pond, measuring about 5m by 8m and cut into the
slope to a depth of about 1.2m, and a level building platform contained
within the angle of the bailey ditch and the south eastern hollow way. Further
evidence for former buildings is provided by a series of slight platforms and
scarps on the southern slope of the hillock.

The area enclosed by the bailey ditch on the western side of the castle
retains a series of low cultivation earthworks representing a fragment of an
earlier medieval open field system. Further ridges or `lands' remain visible
to the north in the area between the bailey and the Middle Level Catchwater
Drain. All these lands lack the characteristic mounds or `heads' caused by
turning the plough, and are therefore also thought to have been truncated and
abandoned when the castle was built. The pattern of ridges here is also
overlain by a small group of partly infilled fishponds located immediately to
the north west of a narrow leat which connects the bailey ditch to the angle
of the Catchwater Drain. This group includes three rectangular ponds ranging
between 15m and 24m in length and averaging 5m in width, arranged as three
sides of a square and linked by narrow, largely buried leats to the bailey
ditch.

The castle may have been erected by the de Bolbec family who held the manor of
Woodwalton between 1086 and 1134, or by the Abbey of Ramsey which was granted
the manor by Walter de Bolbec in 1134. Alternatively, it may have been built
during the period of civil war known as The Anarchy, either by the sons of
Aubrey de Senlis, who seized Woodwalton Manor in 1143-4, or by Ernald, son of
Geoffrey de Mandeville, who moved his forces from Ramsey to Woodwalton after
the death of his father in 1144. The existence of fishponds is thought to
imply that the castle outlived the period of military conflict and
subsequently developed as a residence controlling the northern part of the
dispersed medieval settlement of Woodwalton. The nucleus of the Woodwalton
village now lies some 2km to the south, and the 13th century Parish Church of
St Andrew, which stands in isolation some 600m south of the castle, is
believed to have been sited to serve both settlements.

All buildings, made surfaces, fences, fence posts, water troughs and telephone
posts are excluded from the scheduling, although the ground beneath these
features is included.

Despite some disturbance caused by later quarrying, the motte and bailey
castle at Castle Hill remains substantially well preserved with most of the
area within the bailey ditch remaining undisturbed. Although the summit has
suffered some damage, it will retain buried evidence for the character of the
structure which stood there, and artefactual evidence relating to the period
of occupation will be preserved within the silts of the surviving section of
the surrounding ditch. The baileys will contain further buried structural
evidence and the silts of the perimeter ditch will contain not only artefacts
but also environmental evidence for the appearance of the landscape in which
the monument was set. The fragmentary cultivation earthworks within and
adjacent to the bailey are of particular interest, as these provide evidence
for the character of settlement preceding the construction of the castle.
The fishponds to the north of the castle are also highly significant. Ponds of
this type were constructed in the medieval period for the purpose of
cultivating, breeding and storing fish in order to provide a constant and
sustainable supply of food. Such ponds, which were a feature of a wide range
of secular and religious settlements and required skill and labour to maintain
them, also served as status symbols, especially in areas such as Woodwalton
where the availabilty of fish from neighbouring meres and rivers suggests that
ponds were not necessary as a principal means of supply. The ponds at Castle
Hill survive well, retaining visible evidence for the water management system
and deep accumulated silts which will contain both artefactual and
environmental evidence from the period of use. Their presence implies that the
castle site outlived the period of conflict for which it was constructed, and
developed into a high status residence which clearly influenced the
development of the pattern of medieval settlement at Woodwalton.