A Scheduled Monument in Castle, Cumbria 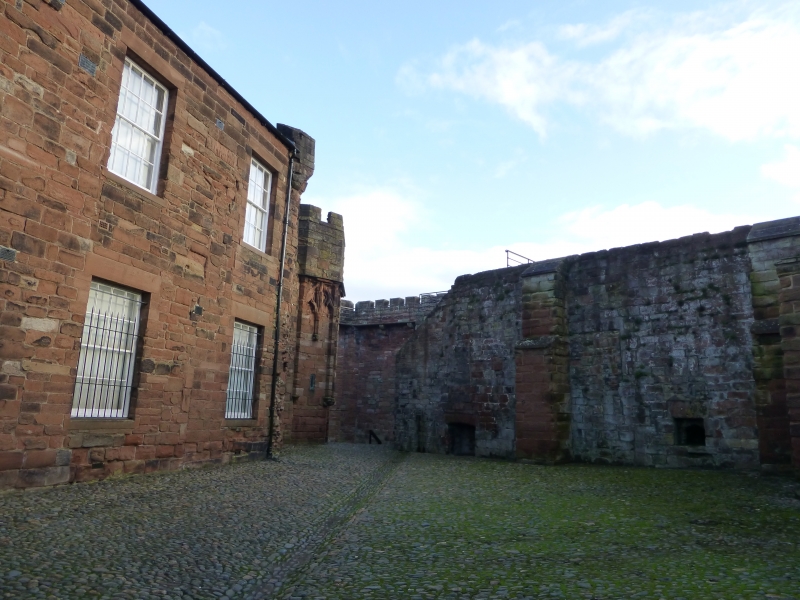 Medieval town walls were constructed as a fortified defensive enceint, the
purpose of which was to protect both the inhabitants of the town within the
confines of the walls from attack by armed or marauding forces and to prevent
the theft or damage to property within the town by these same forces. At many
towns it was the provision of these fortifications, with communal
responsibility for manning and maintenance, that hastened the development of
the borough. Commonly town walls take the form of substantial ditches and
stone or earthen ramparts, and in towns where former Roman or Anglo-Saxon
defences survived in reasonable order the original stone walls or earthworks
were repaired and utilised. Entrance into the towns was through gateways,
frequently defended by gatetowers, where control of those entering or leaving
could be exercised and tolls could be extracted for the introduction or
removal of goods, livestock, or individuals. Other defensive features on the
walls included towers, bastions and artillery batteries.
Batteries are fortified structures on which artillery is mounted. In its
simplest form a battery is a levelled area or platform situated on a hilltop
or terraced into a slope to serve as a gun emplacement. Batteries vary in size
or shape and may be partly or wholly enclosed by a bank, and occasionally
incorporate one or two outer ditches. More elaborate batteries have stone
breastworks and internal rooms with splayed windows from which smaller guns
can be fired.
Roman forts served as permanent bases for auxiliary units of the Roman army.
In outline they were straight sided rectangular enclosures with rounded
corners, defined by a single rampart of turf, puddled clay or earth with one
or more outer ditches. Although built and used throughout the Roman period,
the majority of forts were constructed between the mid-first and mid-second
centuries AD. Some were only used for a short time but others were occupied
for extended periods on a more or less permanent basis. In the earlier forts
timber was used for gateways, towers and breastworks. From the beginning of
the second century AD there was a gradual replacement of timber with stone. As
one of a small group of Roman military monuments, which are important in
representing army strategy and therefore government policy, forts are of
particular significance to our understanding of the period. All Roman forts
with surviving archaeological potential are considered to be nationally
important.
Carlisle Castle and the lengths of city wall adjacent to the castle survive
well and retain significant remains of upstanding medieval fabric. The castle
has seen 800 years of continuous military use and its location close to the
Scottish border meant it functioned both as the first line of defence against
attacking Scottish armies and as a focal point for English military campaigns
against the Scots for many centuries. It provides a significant insight into
the constantly changing design and defensive strategies employed in medieval
castles. Additionally the castle is located upon the central and northern half
of the Roman fort known as Luguvalium. Excavations on the fort's southern
defences a short distance south of the castle have found waterlogged and
remarkably well preserved timber and stone features associated with the four
centuries of Roman occupation. Further evidence of this nature will be
preserved beneath the castle.